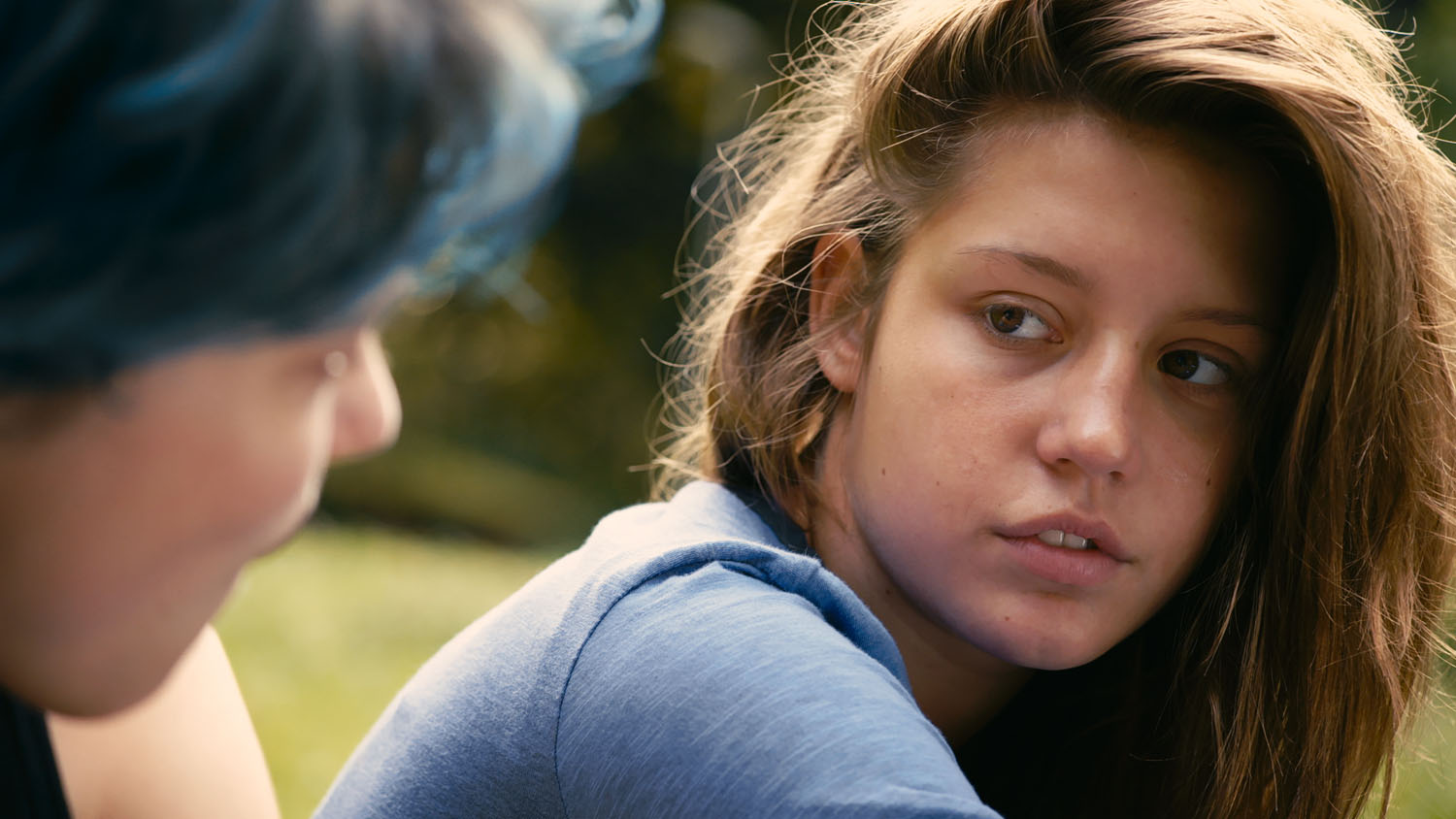 In the 5 month delay between the European wide-release of this film and its frustratingly late Australian release (query: do film reels need to row themselves across the Pacific?), the film had  been written, spoken, blogged, GIF’ed and tweeted about, either lauding or deriding the film, so that by the time it reached Dendy or Palace you feel like your initial reaction would be a kneejerk ‘Yes or No’ response to what you’ve already heard. Thankfully, though, Blue is not such a simple film, living up to and surpassing expectations.

For those that have avoided media hype be it by chance or to spare protect your viewing of the film, here’s a brief rundown of the film sans melodrama. Directed Abdellatif Kechiche, one of France’s most respected directors2, the Palme D’or winning La Vie D’Adele follows the formative years of Adele, played by Adele Exarchopolous, who we meet in high school. This is the story of her life but a large part of her transition into adulthood occurs during and because of her relationship with the slightly older Emma (played by Lea Seydoux), an artist she first encounters as a student. The film is based on the graphic novel ‘Blue is the Warmest Color’ (Bleu est une Couleur Chaude) by Julie Maroh but don’t mistake one for the other. The film deviates a great deal from the graphic novel, with different plots and broadly speaking different concerns. It is a long film spanning a few years but nothing in the films feels arbitrary to Adele’s story. Oil your nuts and bolts because this film is heart wrenching and it is important to say that it is first and foremost an intimately told and constructed life and love story, and not the solely erotic, lesbian fest that its made out to be.

This film, to me, is all about the actresses. Now I completely understand why Seydoux and Exarchopoulos were awarded the Palme alongside Kechiche. Lea Seydoux (being Lea Seydoux) teeters on the edge of the ‘Manic Pixie Dream Girl’ but her performance avoids the two-dimensional character cliché by being both unlikeable and entrancing in equal measure, particularly by the end in the diner scene. Credit is also due to the characterisation in the script; Emma is, in some ways, the harder character to portray because she needs to be open to us without the luxury of a larger screentime and intimate scenes of reflection. The scene in the diner where friendly small talk between the ex-lovers collapses to an urgent upheaval of longing is a prime example of Lea Seydoux’s command of empathy in a film where she doesn’t occupy the primary role. There is a breathtakingly crisp shot of Emma laying on the grass next to Adele before their first kiss, a testament to D.o.P Sofian El Fani’s ability to translate that nervous energy of strong attraction into a visual form that hits the audience and builds on the chemistry of a scene with almost no dialogue. The power of the natural lighting throughout the film, from the warm candlelit colors of the interior shots in the bar and at family dinner to the sharp glowing shots of Adele and Emma in the park, shouldn’t be overlooked and are crucial to setting the tone of the film.

Adele Exarchopoulos’ performance was astounding. I find it hard to describe without relenting to hyperbole but she completely owns the role and sucks in the distance of the screen like a black hole you’ve accidentally wandered into, leaving no space between you and the characters, who’s faces are framed so tightly by Kechiche that recreates that shortness of breath when you’re that close to someone’s face. You feel everything she feels, from her isolation during high school, to her love, her sexual pleasure, her discomfort and most strongly her despair and loss at the end of the relationship. Her performance is almost envy-inducing; she acts with such emotional maturity and has an undeniable command of it. It’s was interesting to see her speak in interviews, and leaves no doubt in my mind why Kechiche was so sure that he’d found his lead actress when he first met her.

The film is wonderfully shot, in an intimate and naturalistic way that furnishes the performances. Much has been said about its length, but I think that is only prominent in the conversation surrounding the film because it is so easy to throw around the accusation of pacing issues. Whilst the film is noticeably long, it doesn’t attempt the eager pace of shorter films and instead gives scenes the space and time to breathe. Little is actually seen of Emma and Adele’s long relationship, but there’s a breadth in how the nuances of a relationship are addressed without being too obvious or didactic. It was not entirely unexpected that class is touched on by Kechiche following The Secret of the Grain (2007), but ultimately issues like infidelity, pride in sexuality and privilege aren’t plated up in a moralizing way. The film remains firmly rooted in the personal and not in the social or political, though it does touch on it.

What the film succeeds in is that it avoids a reduction of queer identities and homosexuality. It is not a ‘lesbian film’, though it is about lesbians. The fact that the sex scenes are blatantly erotic shirks heterosexual film norms of cuddling and declarations of love in the throes of passion. The narrative structure of the film challenges the idea that love is sex, something that is tackled with self-awareness when Adele tries to seduce Emma in the diner. It was refreshing to see two great female characters taken off the pedestal and portrayed as messy and ugly and broken. Adele is shot in closely throughout the film and there is particular attention devoted to showing her in various unattractive sleeping positions, drooling and eating messily. There was no make-up artist or hair stylist on set and the tight camera shots tend to focus on the small physical details of the women such as stretch marks or fleshy thighs that are usually avoided.

The 10 minute sex scene was something that did fall short of expectations, but that seems logical when I consider the concept of fabled lesbian lovemaking from the plentiful (excessive) pontificating of shocked (read: mostly straight, male) film-goers on the internet. Yes it is an erotic scene. Yes it is lesbian sex. It does seem to mark a general move toward more explicit sex scenes in mainstream cinematic viewing, but is neither a landmark nor a blight on the film. It felt necessary to establish their relationship and is proportional to the film as a whole. However it wasn’t particularly well shot and the editing did make the scene feel gratuitously sexual at times, like some sort of educational video on how lesbians make love. Perhaps another example of how a male gaze can’t help but aggrandise female sexuality for viewing pleasures.

Julie Maroh, creator of the graphic novel that the film is loosely based on, has spoken out that the one thing missing from the film seemed to be lesbians3. The double edged sword of adaptation is often that either it is too close to the original text that it can’t stand on its own, or that it’s so far that it’s missed crucial element of the author’s original work. Moreover, I find the fact that Emma’s art draws on Adele’s life in the film an ironic mirror of Abdellatif’s own direction of Seydoux and Exarchopolous4, in the blurring lines of the exchange between life and art. I warrant Maroh’s critiques of the film, but the film is stronger and better as a stand alone piece for its deviations from the original work. It is all in all an incredible film that needs to be seen for itself.