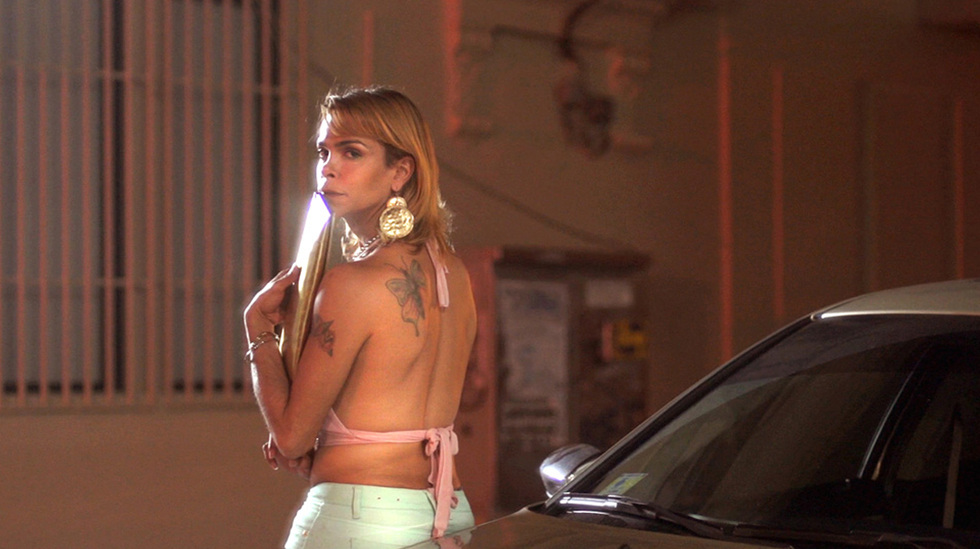 Members of the drag and transgender community have inherited a polarizing identity in contemporary cinema, embodying characters that seem either condemned to brutal tragedy and emotional disturbance (In A Year With 13 Moons, Boys Don’t Cry) or adored for their otherworldly glamor, fearlessness and sex appeal (The Crying Game, Kinky Boots, Divine in anything by John Waters). Mala Mala, the impressive documentary debut by NYU grads Antonio Santini and Dan Sickles, plays against this trend, painting a dark, witty and remarkably humane portrait of gender and sexuality in Puerto Rico today.

The documentary came about as the result of a chance meeting between the two directors and a drag queen at a film festival in Austin, Texas, who invited them back to her home and opened up to them about the daily struggles she faced as a trans woman. “She was so honest and transparent, and all of a sudden we were having this conversation about gender and identity and how it relates to sexuality,” Santini and Sickles told Out Magazine, explaining their early fascination with the theme. “It is universally related to human desires, how we all aspire to be certain things in our life, and if there is a road or a way of achieving those goals. They use and employ these methods as a means to achieve those things.”

The film follows a diverse group of subjects, each with a unique perspective to offer on the issue, including the waifish Samantha, who experienced complications in her male-to-female transition due to faulty black market drugs, the fabulous Queen Bee, a fixture on the Puerto Rico nightclub scene, Ivana, the beauty queen and transgender advocate, and an altogether rarer on-screen example of female-to-male transition, Paxx, whose heterosexual girlfriend binds his chest for him every morning without thinking less of him as a man. Over the course of their individual journeys, several paths intertwine and activist partnerships are born, culminating with a landmark court battle for a law that would give equal employment rights to the transgender community.

Directors Santini and Sickles have achieved something incredible in attempting to explain the abstract nature of gender identification and how their subjects situate themselves on the ‘gender spectrum’. For Alberic, the male-to-female transition occurs fluidly and with artistic intent, when at night he slips on a dress to become Zahara, his self-described Marilyn Monroe stage fantasy: “It’s just ideas, inspiration – it has nothing to do with being male of female.” On the other end of the scale, we meet an older trans woman for whom female gender identification is very much a daily reality – with or without makeup, she refuses to consider herself anything but female, and believes that many young and beautiful transgender females are ‘faking it’. “Are you a beauty queen, or a woman?” she asks, condescendingly. “Because if you’re a woman, you work with what you have.”

Their stories will be fascinating and revelatory for anyone who has ever struggled to understand the varying emotional states that underlie drag and transgender identity. Part of this shared journey involves the cinematography following the subjects’ movements between fantasy and reality. In a series of highly produced drag sequences, the camera swoons over slender limbs and sparkling eye shadow; soft-focus lighting, glitter and sultry gazes abound – and the drag queens are marvelous in their element. This is the world of the night, and the cinematography echoes the decadent glamour of Almodovar, Fellini and RnB music videos. The contrast of these sequences with what is – for most of them – a fairly bleak reality is not the subtlest move, but helps to illustrate the violent chasm that exists between the real and the ideal. It’s a difficult existence that requires a great deal of self-awareness: as Alberic explains, the distinction between stage ‘persona’ and real ‘self’ is a difficult one to navigate, and mental illness looms as one of the many challenges facing the young drag community.

Easily the greatest achievement of this small, crowd-funded project is the elegant way in which it portrays its subject matter, despite the potential for the material to become either exploitative or glorifying – a risk for any documentary tackling margin issues such as prostitution and drug abuse. Santini and Sickles spent three years in Puerto Rico to capture the everyday highs and lows of the local trans and drag community, and the warmth and respect they have developed for their subjects are unmistakable.

Particularly moving is the story of Sandy, a statuesque blonde with an acerbic tongue who works as a prostitute on the streets of San Juan at night. Once a porn star, Sandy now charges between fifteen and one hundred dollars per client in the hope of one day accumulating the savings to undergo a full genital reconstruction. She laughs candidly front of the camera, describing in graphic detail her clients’ – most of whom are curious heterosexual men – exotic requests, and yet shudders at the thought of having to remain a prostitute once she finally undergoes surgery for a new vagina. Her current body plays no role in her true sexuality, and she intends on keeping her vagina (“my best self”) for her boyfriend only.

While I had my initial reservations about the purpose of Sandy’s graphic storytelling — her opening sequence in the film is simultaneously crude and laugh-out-loud funny, it becomes clear that the directors have only the greatest respect for this woman. Her life story unravels slowly but surely, and we are taken thoroughly into her world outside prostitution – she is presented as a balanced, loving human with outside pursuits, relationships and goals. Mala Mala is an important milestone in LGBTQ cinema, precisely because it refuses to define its trans and drag subjects by their occupation or sexuality. ‘Gender’ and ‘sexuality’ as strict categories become irrelevant in the case of Sandy and her boyfriend navigate the struggles of life as a couple. To the audience’s general surprise, her boyfriend looks like a young soccer player, complete with crew cut and sports jersey – perhaps not the most likely advocate for transgender advocacy, but as with most of this film, appearances are deceiving. He is completely enraptured by her, and plans to support her throughout the difficult male-to-female transition process. Even more interestingly, Sandy is ‘the man’ in the relationship, and does most of the talking while they are together. The two make an entrancing couple, no least because of the fluidity embodied by their remarkable relationship. Sandy has been able to ease her partner into admitting to his own blossoming bisexuality. At the same time, she dreads the day she will no longer be attractive to men, and often feels intimidated by younger, prettier, biological girls.

More than a story about gender and sexuality, Mala Mala becomes a surprisingly universal tale of self-realization and acceptance – and, ultimately, love. While I have my doubts that this film will receive wide theatrical release, its educational value is beyond measure. We can only hope that this Tribeca debut offers the films’ stars a wider platform to speak out as voices of change and social empowerment.