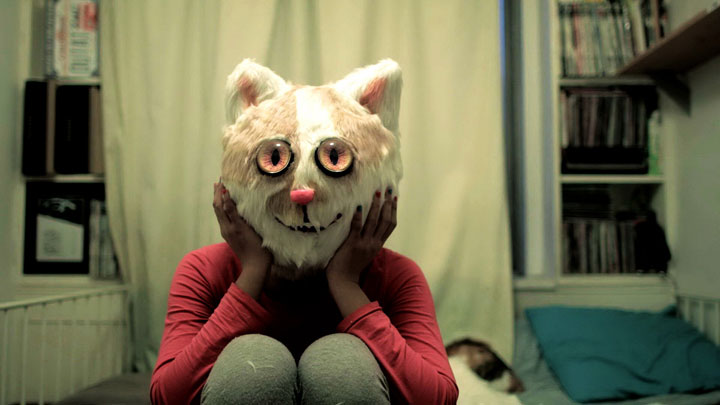 Dancing in the Room (房间里的舞蹈) is the aesthetic daydream of Beijing director post-punk musician Peng Lei (New Pants), framed through the eyes of Huabian (acted by Jiang Yuchen). Huabian is a young university graduate who moves to Beijing seeking culture at the margins, who struggles with what that marginalisation actually entails. Lei depicts the Chinese social phenomenon of the Ant tribe: although China produces over six million university graduates every year, the majority of whom move to the big cities in search of opportunity instead face extreme poverty. Huabian rents a windowless room in a cellar basement 15m below ground, bare apart from a wire-frame bed and static-addled television which seemingly only detects absurdist advertisements (a blue man who emits cartoon sperm from his mouth persuades Huabian’s boyfriend to capitalise on the sperm shortage by donating his own, emphasising that quality sperm will go for more, “Michael Jackson’s sperm would be worth 1,000,000,000 yuan.”) Huabian finds a job generating online hits, but her employers inform her that although they are an American company who pay American wages, because she is Chinese they will deduct her pay by 80%.

Dancing in the Room is an offbeat black comedy of the ‘Chinese post-wave’, radical in the context of Chinese film. It is a remarkable example of a Chinese independent film that is within the system (which means it can be screened in Chinese cinemas and on Chinese television) but was made outside of it (as it was approved for Chinese release post-production).  Dancing takes the form of an extended daydream of a narrative music video (replete with product placement of sponsors Converse and Vice). Yuchen’s appealing performance reminds of Gerwig’s in Frances Ha, and like that movie, to dismiss Dancing as a film about self-conceived artists who don’t make art is to miss that Huabian’s artwork is the content of the film itself. Whereas Gerwig’s art comes from physicality, Huabian represents us all as artists of experience, filmmaker-photographers or curators of moving picture, imaginatively invested with creative powers to aesthetically envision and construct our lives. This speaks to a particularly contemporary experience, made explicit by online structures, as Huabian vocally narrates her lived dreamwork into a blog, beginning with ‘Beijing here I am’. As such, Dancing is filled with the loved things of Huabian, as an avatar for Lei. Lei’s idiosyncratic aesthetic, which merges 1970s and 1980s European and American New Wave and Disco with localised Chinese pop culture, is carried across from earlier films such as Peking Monster, The Panda Candy and Follow Follow.

The film as a dreamwork is finely predicated on the successful focalisation of Huabian. Early shots of yellow flowers emerging from melting snow, a quilting of silver fish heads inside a tank, the backs of two catfish dancing, are wistfully filmed in extraordinary detail and delayed tempo which punctuates the movie’s otherwise rapid post-pop beat. When Huabian travels from her hometown to Beijing, the screen becomes full with panoptic frames of a semi-frozen beach and an expansive interlace of electricity gridlines slipping in and out of animation that is transformed into the grid of pastel urban sprawl. Lei authentically recreates our passing feelings of intense wonder in which we realise something at once incredibly real and ephemeral, instances which often feel so private that to communicate them would be pointless. Hence, Lei’s admirable representation of these is both impressive and reflective of masterful cinematography and editing.

Dancing in the Room is also a reflection on negotiating the post-adolescent tension between the desire for independent space and longing for familiar affection. The film twinges, and is successful in making us twinge with it, during moments of loneliness before we feel comfortable in liking ourselves, and disappointment when we cannot fully realise the kind of intimacy we’ve had tastes of. When Huabian and a friend go out seeking urban social life, the night ends with the two watching the spectacle unfold from afar and Huabian admits, “I don’t have any fun at all.” Her experiments with online dating prove equally fruitless, leading her to an awkward situation with an aggressive cosplay nerd web-poet. Huabian finds that genuine intimacy cannot come solicited, and instead befriends a marbled cat with a surprising charisma that justifies the screen time devoted to it. One of the movie’s endings dips into an absurd parody of the slasher film: after celebrating her birthday alone, Huabian dons a giant cat costume and wields a kitchen knife violently slaying her friends for abandoning her, and the otherwise twee post-pop synth soundtrack is ceded by dark reverberations in comic horror style. In a second ending, Huabian’s rampage is remembered as a dream, she instead awakes to a surprise birthday party. Both are presented as fantasies, and to Lei’s merit, the film presents its two endings as equally implausible drifts of the imagination. According to producer Gan Tian, the film was originally going to end with the killing-spree, but was amended before submitting the film for approval, softening it by framing it as a dream sequence.

Were it not for the early moving still-life shots, and the winningly self-conscious and sincere humour with which Yuchen plays Huabian, I believe the film would have dissolved into a 90-minute Vice video-campaign. Among the film’s failings is its weak use of the rest of its cast, who display great potential, but mostly serve as foils to Huabian. Possibly this is owing to the daydream quality of the film, as in our internal narratives we are always centre. The movie is genuinely very funny: Huabian meets a shopgirl who shows her a Bowie record that is reputedly the work of her American boyfriend she met over QQ. She is naively optimistic and utterly unaware of self-delusion, in America she says her English-speaking will pose no difficulty to her imminent marriage with Bowie because “There are more Chinese in America than in China…English is becoming a foreign language there.” When she tells us when they soon marry it will be his third time, Huabian and her friends nod and hum in belief.