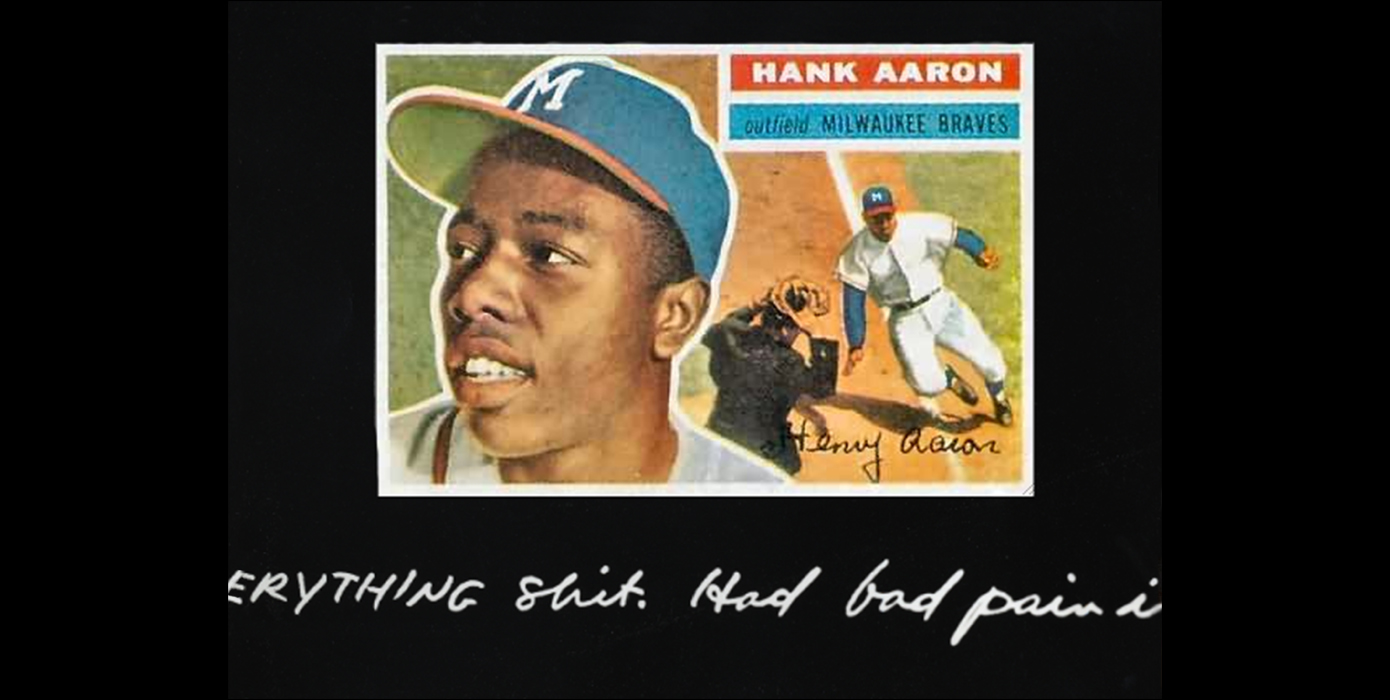 An American experimental filmmaker, Benning has made engaging and challenging works of cinema for over 30 years, playing with form and time. This years Sydney Film Festival held a miniature retrospective of his work, programmed by Double Play director Gabe Klinger. You can read our interview with Gabe here and our interview with James Benning here.

James Benning’s 1984 cinematic experiment is comprised of four essential elements – first, playing cards and memorabilia concerning baseball legend Hank Aaron from Benning’s personal collection; second, contextual music running from the 1950s to 1972; third, interspersed within the music, audio clips from news bulletins, speeches and sports telecasts; fourth, a scrawled handwritten diary that delves deep into the psyche of a damaged man, who is revealed to have played a minor part in American history.

That alone should indicate that this is not your usual filmic experience, nor it is your usual take on history. Benning does something remarkable with narrative convergence as the viewer eventually becomes accustomed to the sheer overload of information presented. As someone who feels a compulsive need to consume content, I found my brain working double time early on, trying to make links between all four elements appear through sheer apparition but Benning’s too clever for that – he plays the long game. We watch as Hank Aaron (occasionalyl called Henry – morseo as he ages) moves from fresh faced wonderboy to stalwart veteran to living legend, acompanied by an awkward and near aburpt shift as the cards both farewell then instantly memorialise his career. We listen as the genre of music changes, American Graffiti had me well prepared for many of the earlier songs but I never would have picked it to end on the Bee Gees, via a trascendently haunting Donna Summer song. The radio broadcasts play with dramatic irony quite cleverly, replaying of course the JFK assassination but not RFK’s, Dr King or Malcolm X – Benning doesn’t portend to capture all American history, just a filtered snapshot. 1 The handwritten scrawl at the base of the frame, oft unreadable and only becoming fully formed later in the film, begins as a mere curio – that is, if you don’t know already whose handwriting it is (I half did) – then gets dark and sad, then determined and suddenly gripping, Benning able to make a compelling narrative on film that essentially is comprised of reading text. As the diary entries become more and more pointed, they call to mind James Ellroy’s ‘Underworld U.S.A.’ trilogy in how rapid fire the ideas are and how intimate to history it feels.2

The film is wrapped up in pop culture history that both preceded and followed it. Looking at it now, thirty years after it was first released, it still has a finger on the pulse of contemporary nostalgia, commenting, if by accident, on sensory overload, a morbid fascination with death and fame and the investment in objects to supplement identity. – CB

Both visual essay and historical study, Deseret appears, on the surface, to chronicle the history of the American Mormons in Utah yet beyond that it also looks at industrialisation through montage and the changing nature of the New York Times – as the film’s voiceover is supplied only from Times articles, ranging from its founding in 1851 to the 1990s. Beyond the intellectual curiosity triggered by this unusual historical structure, the most striking element of the film is its visuals, each shot lasting the length of the sentence of voiceover (getting quicker as we progress through history, in an amusing structural element). Benning spent three years travelling around Utah to film Deseret, and the wide range of locations and truly stunning frames are an ode to his dedication.3 Projected on 16mm and shot on a 4:3 ratio, Deseret brought to mind Kelly Reichardt’s superb Meek’s Cutoff and, in a sense, it is also a revisionist Western. We see, of course, Monument Valley and so the wealth of John Ford westerns seep into our collective memory alongside what information we are being told. This provides an amusing contrast to the quite graphic description of an attack by “natives” in an earlier section of the film, the placid landscape rocked by our retroactive positioning of that event but also the knowledge of the history of ‘Western’ cinema. With only a handful of people actually seen in the film – Benning cuts to a family and a group of children at points when it suits the voiceover narration – these vast and open areas gain an unsettling action.4 This absence of people, whilst fairly common in the work of Benning, renders one shot in Deseret doubly powerful, that being of the Great Ghost Panel at the Great Gallery in Horseshoe Canyon, a rock painting that in its existence is a historical document but which here makes starkly clear the absence of humanity, both literal and often figurative. – CB

Benning’s 2011 feature Nightfall is one of the most unique in-cinema experiences I have ever had. A one-shot film lasting around two hours in length, it sees the camera placed in a set position, focused (figuratively and literally) at trees in a forest as the sun recedes and night creeps in. That’s the elevator pitch and one which tends to make people standoffish, audiences may be quick to suggest boredom or monotony as the only virtues to be gained from the experience. They would be sorely mistaken. Nightfall is not a nature documentary per se, it’s one of human nature – forcing each audience member to stew in their own thoughts for two hours. A rarity in today’s fast-paced content world, the film elongates your attention span and, once the initial panic and overthinking wears off, your mind and eyes often work together and at odds with one another – unsure whether to focus on a specific shade of green found nowhere else in the frame or to think about a regret you had forgotten about. Where in American Dreams Benning overtly causes this disconnect in absorption of information, here it subtly rises up, organically, within each viewer. As you become comfortable with the frame in the first half-hour, your mind conjures images of pareidolia – Shakespeare and a gorilla side by side in bushes in the centre of the frame, three rows of trees back, as the frame gets darker and the remaining light at the top of the frame becomes near blinding in relative intensity one half of the face of Marlene Dietrich can be made out from a series of leaves which once could be mistaken as a farway snowy mountainside. This reappropriation of image within your eye is an odd and rewarding element to Nightfall; whilst it is obvious that your thoughts will be different to the person sitting next to you, the notion that even the image we’re watching for 120 minutes will be received differently is exciting. – CB

Whilst not explicitly a part of the Benning retrospective, the documentary Double Play, from director Gabe Klinger, exists as a portal into both Benning and Linklater’s works, primarily through carefully positioned clips alongside casual conversations between the two filmmakers. Their cordial nature and the fact that we exist as a fly on the wall at both their formal Q&As and their informal chats makes for some interesting insights into the filmmaking process and the nature of influence. Linklater’s presence here is evidence enough of the huge impact Benning’s work has had on his filmography, but for Benning he cites Maya Deren and a man reciting Finnegan’s Wake as triggers for his exploration in film.5 As the film nears its end, we go behind the scenes of Linklater’s masterful recent Boyhood, which is supremely interesting – Benning asks about the film’s ellipses and narrative structure then transitioning into the importance of making the entire film on 35mm – CB