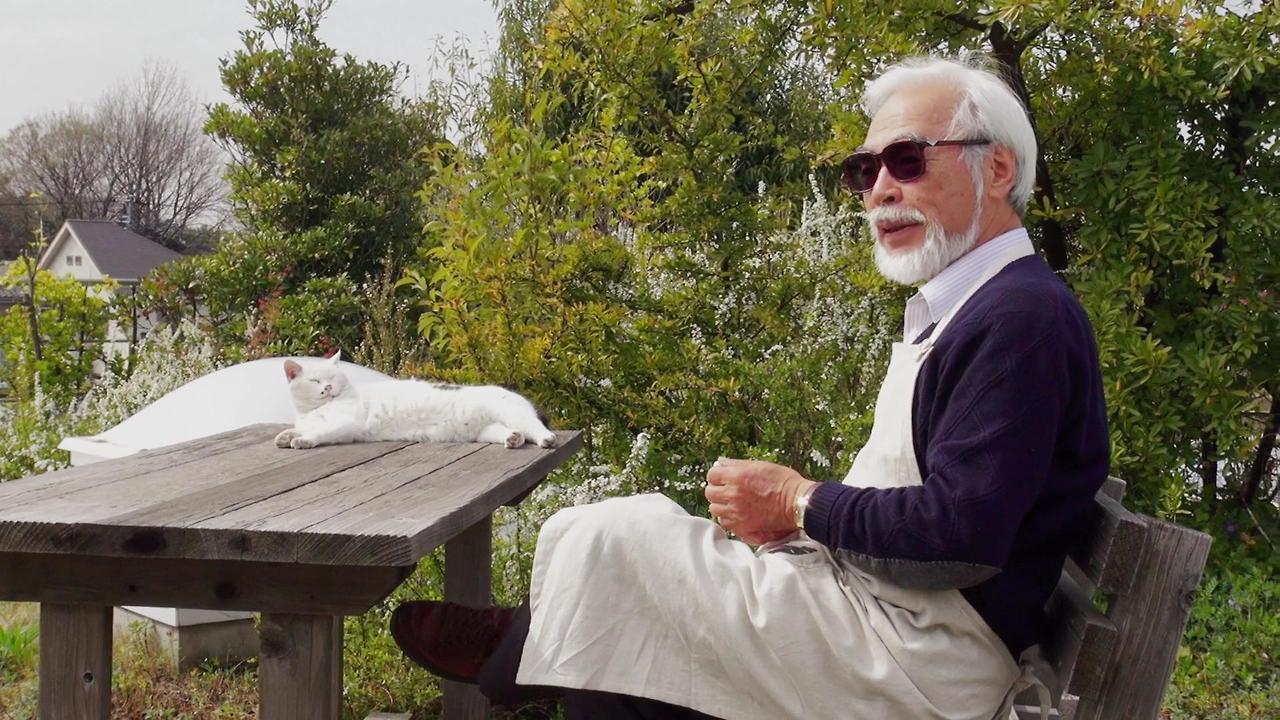 Mami Sunada approaches her documentaries with a rare delicacy that skirts the boundaries of cliche without ever bridging away from being something wholly sincere. She films her subjects with a rare intimacy, and is able to present them at their most human. In The Kingdom of Dreams and Madness, her focus – Hayao Miyazaki and Isao Takahata – are flawed, yet genius, and astute yet silly. A fly on the wall, her input in the documentary is only given through occasional voice-overs describing the action; besides this, nothing. She allows the subjects to be the focus, and while occasionally her influence in the documentary bubbles to the surface, Sunada is – more often than not – able to step into the periphery and let the people she films take the work where they want to take it. Slow and nostalgic solo piano pieces are trickled throughout, fairly liberally, yet while their obviousness can often feel corny, this is always coupled with their intended effect. Sunada is shameless in his attempt to extract emotion from the audience, but it is this ability to wear cliche like a badge of honour, stopping it from surfacing on its own accord, this makes The Kingdom of Dreams and Madness a sweet, sincere and affecting movie.

Sunada has an odd and markedly unique way of achieving emotion in her documentaries – embracing what most filmmakers strive to avoid – yet somehow, for her, it works. Mami Sunada’s previous film, The Death of a Japanese Salesman was a documentary that followed a man from his retirement to his death resulting in a film not only extraordinary, heart-wrenching, emotionally exhausting and completely unique – but refreshing in its earnest presentation of intimacy in its rawest form. The film screened at the 2012 Sydney Film Festival and, although it was seen by too few and failed to get the critical reaction it deserved, the dry eyes left in the theatre by its conclusion could be counted on one hand. While The Death of a Japanese Salesman was a masterpiece in its own right, it’s easy to let out a sigh of relief with the tonal shift between Sunada’s previous and most recent work. While there are still highly defined emotional moments trickled throughout the film, it is neither exhausting or cathartic – and as a documentary about Studio Ghibli, it really shouldn’t be.

Throughout the documentary, Sunada is able to make her scenes come off as professionally quaint; sometimes she even manages to emulate Ghibli’s films with an eerie sense of accuracy. Although she isn’t dealing with animation, Sunada places an intense focus on nature throughout the documentary, often in short transition shots set in picturesque parks and florally areas in Tokyo. It adds to the modality of the documentary as something existing as an intimate limb to the Ghibli output, especially that of Takahata and Miyazaki, and Sunada’s ability to emulate the atmosphere and mood that permeates their work allows the documentary to be easily palatable to a Ghibli fan. The film is even able to re-contextualise the often carefree and disconnected characteristics of Miyazaki and Takahata’s characters onto the directors themselves. On some levels, it feels like a Ghibli film, on other levels, it’s clearly something examining the creation process for Studio Ghibli. There’s a lot of levels to Sunada’s film and it’s all the better for it. It’s simultaneously enjoyable to sit through, insightful into the creative process, and sentimental in the same thought-provoking way as a Miyazaki or Takahata film.

The Kingdom of Dreams and Madness is primarily concerned with Miyazaki. Even though Takahata holds a major secondary role, he’s most often viewed through the frame of his friendship with Miyazaki. While it does have the occasional scene talking with Takahata, Sunada’s decision to focus on Miyazaki makes the documentary all the more consuming. Viewed through Sunada’s intimate filmmaking style, it’s fascinating to see Miyazaki chain-smoking, nihilistically joking about the end of the world, and often lamenting going to work; at the same time, it’s invigorating to see his passions at their peak – his neurotically tracking the fallout from the tsunami, his playing with airplanes, and him passionately talking about transcending the bounds of filmmaking through animation as he glances into Tokyo’s skyline. As Miyazaki describes what his animation is able to do – having people “jumping between buildings” and egressing their physical boundaries -Sunada splices his documentary with Miyazaki’s films, and the creative process comes full circle in his trademark shamelessly sentimental fashion. The documentary’s decision to go one step further in trying to emulate and understand the ideas and views that inform Miyazaki and Takahata makes it a much more memorable flick than it would have been otherwise.  The Kingdom of Dreams and Madness is easily the most comprehensive statement on Studio Ghibli’s output and the figures that have created it. If you’re interested in either filmmaker, or even the documentary process, Sunada’s film is a potent example of a work doing justice to the subject it concerns itself with.