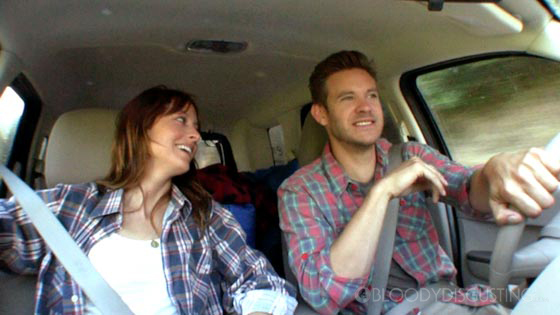 Willow Creek marks Bobcat Goldthwait’s first foray into a false cinéma vérité mode, and his first move away from the comedy genre. Another entry into the near endless list of found-footage horror films out there, Goldthwait’s Willow Creek has been touted as revolutionising and breathing fresh air into the aesthetic. Combining elements of prior POV and mockumentary films like Thomas Powell’s 1960 Peeping Tom and Benoît Poelvoorde, André Bonzel, and Rémy Belvaux’s 1992 Man Bites Dog, Daniel Myrick and Eduardo Sánchez’s 1999 The Blair Witch Project sparked a visual revolution, pretty much single-handedly creating the modern found-footage genre and spawning an endless number of rip-offs and clones.

Arguably, the next most important entry was Matt Reeves’ 2008 Cloverfield, one of the first films to successfully go “big-budget” with the found footage niche. Then came Oren Peli’s 2009 Paranormal Activity, a film that stripped the genre back to its minimal roots and had the unfortunate effect of reminding Hollywood that it can be extremely profitable to pump super-low budget, low production value movies into the market and generate huge profits. From here (as with the post-Blair Witch boom of the early 2000s) we saw thousands of lazy clones and sequels that forgot what made the original so successful – the element of believability. Now comes Willow Creek; does it actually revolutionise the found footage genre? And is it the breath of fresh air we’ve been waiting for? Well, no (unless you count actually being good as revolutionary), and yes – by stripping the genre back to its roots and reinstating the sense of realism that made the Blair Witch Project so successful (it’s much more successful at this than the first Paranormal Activity or any of its sequels) Goldthwait has crafted refreshing Bigfoot fare.

Even though Bryce Johnson and Alexie Gilmore will be familiar faces to some (particularly those familiar with Goldthwait’s previous work), their performances are particularly believable, immersing you in their story. Most importantly, the whole thing looks and feels like self-shot footage that could have been edited down to make a low-key Youtube documentary targeted at Bigfoot believers which allows the audience to truly immerse themselves in the film. Willow Creek follows a Bigfoot fanatic and his sceptic girlfriend as they shoot a zero-budget, handheld film retracing the Patterson-Gimlin footage, interviewing locals and other Bigfoot fanatics on their way. An aspect of the film that injects the realism that other of its ilk have recently been lacking is the minimal use of professional actors; most roles that would normally be allotted to paid extras played by locals.

There is believability in these performances and the (obviously) largely improvised dialogue; there’s also an authenticity to the awkward on-camera interactions between Johnson and untrained locals who have clearly never undergone any sort of formal acting training. Structurally, Willow Creek is also far more enjoyable than many other recent entries into the found footage genre, due in major part to Goldthwait’s solid script, filled with interesting side-bars and clever, relevant sub-“plots” (if you can even call them that) – not to mention a fantastic and tense, rare stable long-take in the film’s final third.

It’s fascinating that it took Goldthwait, a stand-up comedian and comedy director (albeit, a highly accomplished one), to breathe new life into a stale horror sub-genre. Some have said that this is a very generic entry into the found-footage genre and while this is partially true it would be disingenuous to suggest that Goldthwait’s signature brand of comedic subversion isn’t at work here – particularly in the finale (although it is quite obscured). Overall, this won’t convert any naysayers into fans of the found footage aesthetic, but if you’re partial to a bit of first-person shaky-cam, or enjoy the Bigfoot mythos, you’ll probably have a fairly decent time with Willow Creek.