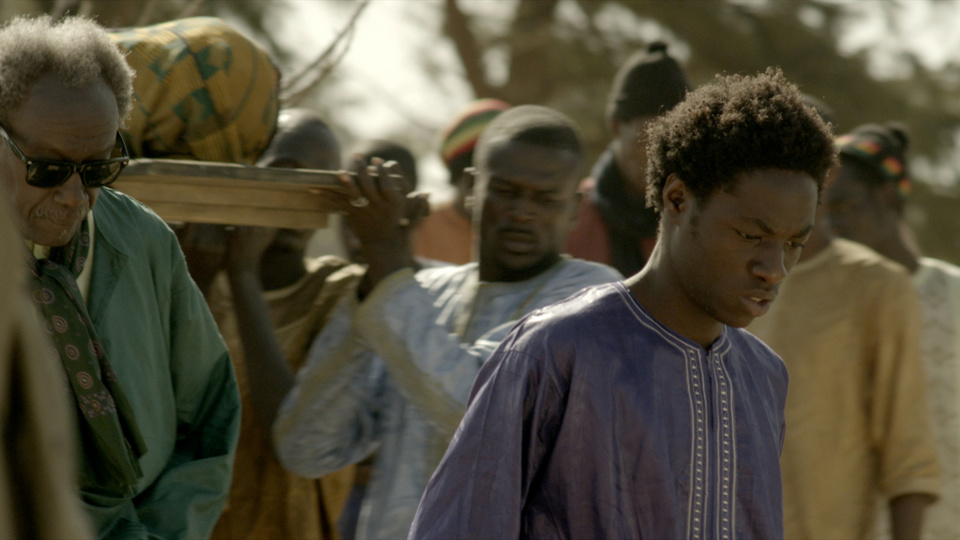 A young Senegalese woman, Sophie, travels to Turin to find her husband, Abdoulaye, who has recently moved there to try his luck finding work. Arriving at the apartment where he is supposedly staying, she finds only some other women who are either unsure or simply unwilling to reveal any details about his whereabouts. Abdoulaye, we find out, has traveled to New York with his cousin to find work in construction. Abdoulaye has an address in New York, a bar that belongs to Sophie’s aunt. She, however, is in Dakar to help with the burial of her husband with her son Thierno, who is seeing Senegal for the first time in his life.

Under the Starry Sky is full of these missed encounters and interwoven paths that do not cross, mapping a family’s complex set of relationships across the focal points of Turin, Dakar and New York. Dyana Gaye, in her first fiction feature, has made a subtle and reserved family portrait whose strength lies in its restraint and the director’s insistence on keeping these trans-national narrative threads apart. In doing so, the film is not so much about the classical story of the voyage home as it is about the modern reality of global dispersion, the diffusion of families, and on a more abstract level the diasporic condition.

In an interview earlier this year, Gaye spoke about how the jumping off point for Under the Starry Sky was the British artist Nick Bantock’s Sabine et Griffon series, a fictional exchange between two strangers who send postcards and letters to one another from different corners of the globe. While this epistolary aspect of the Bantock series was not kept in the film, its influence is felt in the way the characters’ lives unfold in isolation yet always in dialogue with their pasts. Sophie’s newfound independence upon arriving in Turin is kept in check by her expectation that her husband will soon return, Abdoulaye is unsure about how to balance obligation and survival. The removal of the letters, and indeed any kind of contact between characters – the film is full of phone calls either never made or ones that don’t connect – forces the focus of the film instead onto how they will deal with life in a new city.

Fittingly, as the film goes on, Gaye’s camera trains itself more and more on the characters in long shot, placing them within the context of their surroundings. In a seemingly throwaway sequence exemplary of this change in focus, Sophie walks past a group of prostitutes soliciting passing cars. Sophie walks from out frame and past the group of women and the camera lingers on them after she’s left the frame. It’s a brief, passing moment, nothing is made of it later in the film. In a later scene, Thierno and his cousin visit Senegal’s island of Gorée, a tourist destination with a museum dedicated to its part in the Atlantic slave trade. Both of these moments are not without their thematic resonances – the former in reinforcing the cultural differences Sophie faces and the latter in reflecting on Thierno’s journey with relation to the colonial past – nor are they entirely separate from the internal dramatic structure of the film, but they are delicately handled and offered up to the audience without any hint of didacticism.

In the end, this focus on detail and lived experience is what makes Under the Starry Sky a worthwhile film. Its refusal to generalise on issues of immigration and displacement has produced its detractors in France,1 yet it resonated with me as an intimately scaled but still powerful reminder that the forces of globalisation cannot produce a singularised migrant experience.