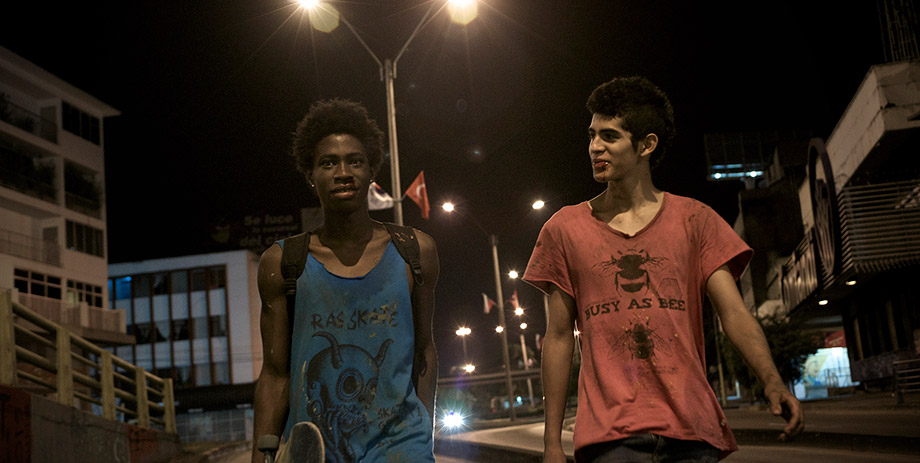 In Los Hongos, Oscar Ruiz Navia paints a vivid portait of disaffected youth in Cali, Columbia, as part coming-of-age film part political commentary of the Arab Spring. All of this is centred around the culture and graffiti lifestyle with which the two main characters – Ras and Calvin – immerse themselves. Their friendship is largely idealistic, breaking through barriers of class and race with the innocence of youth used as a constant thematic reasoning by Ruiz Navia.

The Arab Spring protests paints the inspiration and the contextual stage for the characters in the film, serving as a catalyst for the Ras and Calvin’s involvement in a more politically active graffiti culture, joining a larger group. Graffiti, a constant metaphor for resistance and alienation throughout the film, is the point of bonding for what becomes clear are two individuals with markedly different backgrounds. Ras has been raised by his single mother in a working-class mother; the two of whom have moved into the city. Calvin lives with his grandmother, currently undergoing chemotherapy, with both of his parents divorced. Ras and Calvin bring unique worlds to one another, and neither seeks throughout to assert their experiences and worth over the other.

It’s a companionship that is often used as an idealistic political tool of reasoning by Ruiz Navia, who seeks to paint an imagine of resistance and solidarity amongst a diverse range of oppressed groups. When Ras is questioned “Are you at university as well?” he responds, clearly: “No, I’m a skater”. The implications are obvious, and never framed by the director as any less legitimate, and that’s one of the most impressive trends throughout Los Hongos. On the other hand, Calvin is a student – although, in the scenes where he interacts with his classmates he oscillates between amused and seemingly uncomfortable at ease – who rides a bike.

The relationships the boys share with matriarchal figures is a particularly special element of the film. Ras’ mother (Maria) is an evangelical worshiper, however, despite not following this himself, he never questions this and allows space. In one particular long take, Ruiz Navia films Maria and her friends singing in unison in one of the film’s more beautiful scenes; Ras, who is on the edge of the frame, carefully waits until they are finished to interrupt. On the other hand, Calvin and his aforementioned grandmother are shown with the same mutual respect. These relationships allow a context for intimacy within Los Hongos.

The film lacks a certain sense of direction throughout, as if unsure of exactly what it wants to be, although, this never feels lacking in calculation; it feels like an attempt from Ruiz Navia to most effectively mirror the situations of the characters. Los Hongos never places its narrative on a teleology towards some sort of ends; it drifts, it meanders, it shifts focus – constantly unsure of the direction it wants to be taking -, and it never centres in on a particular element of Ras or Calvin’s lives for too long. It moves in symbiosis with them, mirroring the constant uncertainties that punctuate a period of coming-of-age for both of the boys. The film has flaws and it will certainly frustrate those seeking out a clear narrative – it doesn’t have one, and it’s clearly the intention of Ruiz for it to be that way -, but it also has a lot to offer. Los Hongos is a biting social critique of the vicissitudes of growing up in Columbia under the hopeful spectre of change.