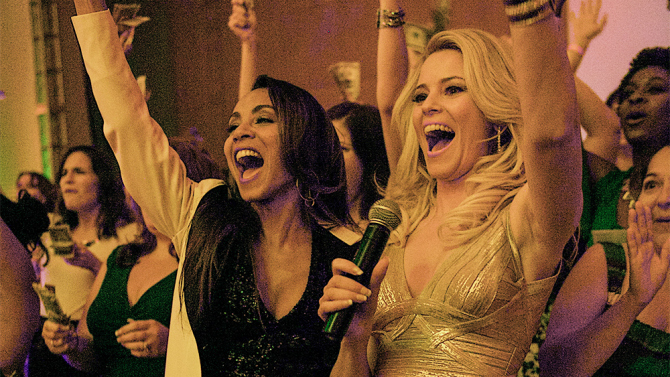 Magic Mike XXL picks up some time after the events of the first – Channing Tatum’s Mike Lane has gotten out of the male entertainment business and is running his own furniture design company, ostensibly living out his dream with Brooke, his love interest from the first film. But there’s trouble in paradise, and when his old stripper friends blow into town on their way to Myrtle Beach for the annual stripper convention, it doesn’t take much convincing for Mike to jump back in the van. With Matthew McConaughey’s Dallas, their MC and leader, out of the picture (having taken off to Europe with Alex Pettyfer’s The Kid to start a new show), Mike has a drastic proposal for the gang – for their last ride, they should come up with new routines that reflect who they really are, and go out with a bang.

The first instalment gave us a surprisingly dark and honest picture of the milieu of male entertainment – paired with Soderbergh’s dialogue-heavy, exposition-light style, it gave its audience an insight into a world of excess, of substance abuse, and its subsequent affect on human relationships. The characters of Magic Mike live and breathe an industry determined to find and give pleasure. In the hands of Soderbergh’s longtime First AD Gregory Jacobs, XXL becomes about getting back to what is at the heart of a male entertainer’s job – giving pleasure to women.

The female gaze is put back at the centre of the picture as the boys travel to Myrtle Beach and rediscover what they do, from making a gas station employee smile to satisfying thousands of women at the stripper convention. In doing so, they create routines that come from the heart in an inevitable training montage – and yes, it plays as cheesily as it reads, giving each male entertainer his moment in the spotlight with personalised choreography. The end result is a mutually beneficial relationship – the pleasure becomes two-sided and the performance is not so much exploitation as celebration, as the boys learn to love what they do again while putting female pleasure first.

The film is very loosely plotted – the road trip to Myrtle Beach provides a very basic structure for the film but it meanders comfortably between encounters and audiences. This can mean that it loses momentum and pace, and the finale performance at the convention does feel overly long.

Tatum proves his star status and comedic chops as the film’s grounding presence. He embraces his own objectification by the industry with aplomb, and plays the deadpan humour of the character with plenty of laughs. Joe Manganiello, Matt Bomer, Kevin Nash and Adam Rodrigeuz all deliver solid turns as larger than life personalities, and without Matthew McConaughey’s Dallas pulling focus, there’s a sense of growth in those roles. Tatum’s straight man Mike is even more crucial amongst his more absurd colleagues, and he balances them out well.

One of the film’s most compelling and engaging performances comes from Jada Pinkett Smith as Rome, Mike’s old boss and flame and their new MC. Rome runs a subscription-based exclusive set-up in Savannah, Georgia. Empress of all she surveys, in the film’s slower moments, you can’t help but wish for a Rome spin-off film as she slinks around on screen, emanating a quiet power.

Elizabeth Banks is excellent in a small role as Rome’s protégée, and Donald Glover appears as one of Rome’s more charming employees (for extra points for those playing at home, imagine that Community’s Troy Barnes has somehow ended up in Savannah).

Despite stepping back from directing this one, Soderbergh is still very much a presence in the film – more obviously, as the DOP and editor under his usual pseudonyms, and more abstractly in the stylistic influences of the films. Sequences in which characters have serious conversations while their competitor strippers practice cowboy routines in the background show their inheritance pretty clearly. At times it feels like there could be more of that depth-of-frame or full use of the scene, but Jacobs handles himself well in a large shadow.

I highly doubt anyone will go into Magic Mike XXL with the wrong expectations – the film is very frank about what it offers and very efficient in delivering it. Fans of the first will be very happy with what they get, and those encountering our strippers-with-hearts-of-gold for the first time may be pleasantly surprised.