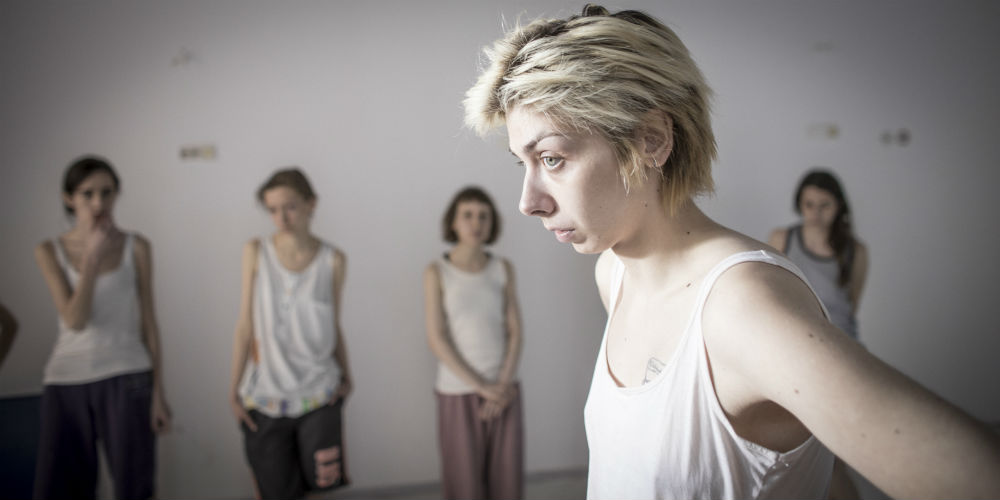 Małgorzata Szumowska’s Body, which won her the Silver Bear for best director at Berlin, opens with one of the best visual gags I’ve seen at this year’s Melbourne International Film Festival. After a nondescript man is discovered hanging lifelessly from electrical wire wrapped around a tree branch, the police cut him down and momentarily turn their backs on the corpse, only to have the apparently not-quite-dead promptly rise and dust himself off as though he’s merely slept through a morning alarm—wandering cheerfully off into the nearby park and, as it happens, out of the movie altogether. Whatever absurdist jaunt he disappeared on might have been more rewarding to tag along with, because Szumowska’s film, despite promising such dark drollery and impish social critique, disappointingly abandons them for the familiar rut of the family reconciliation drama.

To be sure, there’s plenty of intriguing material on offer. Szumowska, whose In the Name Of topped Berlin in 2013 but is likely best known here for her Juliette Binoche arthouser Elles, sets up a trio of interlocking Warsaw characters whose deadpan, almost Roy Andersson-esque exteriors barely conceal the emotional tumult thrashing within. The jaded coroner who lead the opening search party, Janusz (Janusz Gajos, of Kieslowski’s Three Colours: White), is a booze-addled widower who shares a cramped, dour—natch, it’s Polish cinema—apartment with his daughter Olga (Justyna Suwala), a ghost-eyed, bleach-headed anorexic who contorts herself into bizarre shapes when she’s not throwing up, or bottling up undiagnosed grief over her departed mother. Olga’s latest vomiting freakout prompts Janusz to send her to a clinic for girls with eating disorders, where she’s counseled by a psychologist, Anna (Maja Ostaszewska), who also happens to be a spiritual medium with a dead son and a smashing line in burgundy skivvies and wool-knit waistcoats—and presumably thus lives alone with only a giant slobbering dog for company.

The characters’ respective losses—wife, mother, infant son—don’t make for an especially remarkable narrative, but for a while Szumowska manages to infuse their circumstances with agreeably off-colour humour that suggests a larger satire of contemporary Polish society. Janusz is a something of the typically comedic existential figure of Eastern European cinema, his fridge stocked exclusively with vodka and his cynicism derived from days spent scooping aborted fetuses out of public restrooms and slurping broth from fluorescent-scarred food courts. Newcomer Suwala plays Olga as a haunted, angry Bambi swinging between sarcastic putdowns and startling rage, while Ostaszewska mostly avoids the potentially deadly quirks of Anna’s character with an intuitive, sometimes drolly funny performance. Szumowska’s social commentary is often keenly arch, as when the film echoes a shot of anorexic girls with a police lineup of women accused of abandoning a baby; the female form effaced under the brutal glare of a male bureaucracy.

The strongest elements of Body come from this, Szumowska’s exploration of the interplay between the spiritual and the corporeal, and how—reflecting that oddball opening vignette—the human form can be transformed and distorted into any number of states, from the corpulent to the undernourished, the decomposed and, finally, the disembodied. An awkward yet weirdly electric dance performed by the anorexic girls captures both the grotesqueness of the human body and the irrepressible charge of the ethereal, as though the figures have been reduced to pure forms of the spirit world; later, an outline of Anna’s ostensibly “normal” shape traced onto the clinic wall seems comically hideous next to the lithe, alien-like silhouettes of the emaciated teenagers. Szumowska’s widescreen compositions work at effective odds to the claustrophobic architecture of the city and its inhabitants, suggesting, again, the possibility of release or, at least, physical transgression.

As quietly and amusingly engineered as it is, there’s a certain point at which the film collapses into the grey haze of its Warsaw atmosphere. Body peaks midway with a scene in which Janusz’s middle-aged lover grooves, deliriously and half-naked, to the new wave strut of Republika’s “Śmierć w Bikini,” the song’s ridiculous chorus of “Bikini, bikini! Death, death!” sounding the movie’s call to arms. But it’s an illusionary high, and the movie rapidly retreats from its punkish attitude and shrinks into an underwhelming drama more concerned with the rote business of sorting out Janusz and Olga’s family issues—complete with a cheesy, ineffectual conclusion that papers over the spiky edges.

The decline from head to heart over the film’s final half hour is so precipitous that it undoes so much of the work preceding it. Either unwilling or incapable, Szumowska dodges the interesting aspects for a corny family reconciliation, negating the psychic angle—literally, in the case of Anna, who’s discarded as a means to an end—and washing away all the body issues, grief, and probable haunting with a dopey grin and a tired pop music cue: Gerry and the Pacemakers’ “You’ll Never Walk Alone”, exactly as effective as it is in the six million life insurance commercials it’s been pimped out to. Body has much to recommend it—Suwala’s performance, in particular, makes her an actress to watch—but its flaws are difficult to overlook.