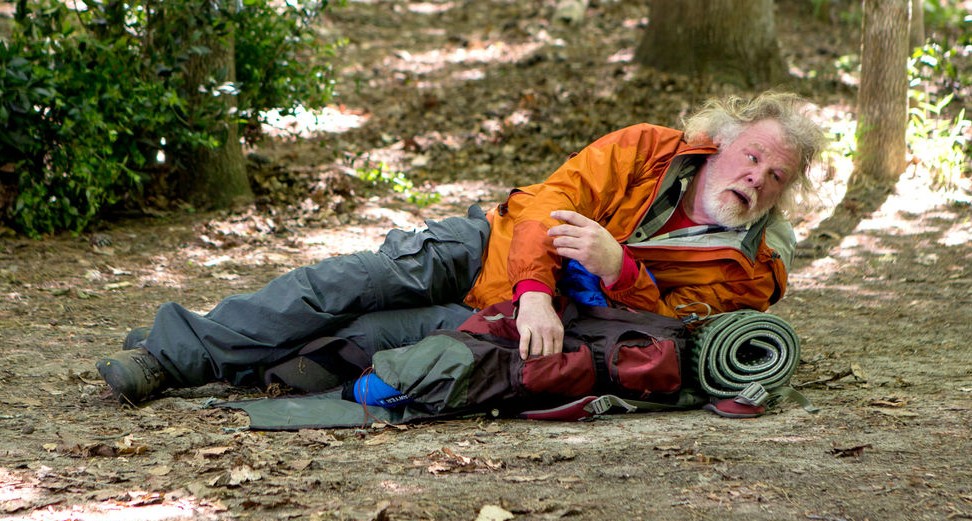 A highlight of Bill Bryson’s A Walk in the Woods, his 1998 memoir on hiking the Appalachian Trail, is when he rips into a tacky Tennessee town called Gatlenburg. After steady waves of lush imagery and bemused anecdotes from his endless days of walking with cranky companion Stephen Katz, his cynicism comes pouring out in the takedown of an over-commercialised tourist trap. He describes it as a place where “throngs of pear-shaped people in Reeboks [wander] between food smells, clutching grotesque comestibles and bucket-sized soft drinks”, and seethes with frustration over how dramatically it dwarfs the Smoky Mountains National Park it adjoins. Caustic notes like this are what make him relatable in this particular story, more than the knack for accessible discourse that has won him so many fans throughout his career. In this new film adaptation, Robert Redford guns for the same while playing Bryson, but his ten-year stewardship of the project as producer has somehow allowed it to denigrate into just another commodified trap. With a fixation on the discover-yourself vibes that gave The Best Exotic Marigold Hotel a sequel, it takes kerosene to Bryson’s painterly shades, leaving no bold marks to justify itself.

Director Ken Kwapis comes to the project from sitcom television, and starts proceedings in the key of hammy absurdity via a breakfast talk show interview. The host hectors Redford with impossibly rude and presumptive questions about where he plans to go next in his hallowed literary career, to which Redford drops laconic snark and befuddlement that would make Cara Delevingne look cordial. He seems rebellious rather than bratty, though, and this contrast of the repressed scholar and the hurly-burly modern world crops up again and again in pandering style. As with other recent mainstream odes to seniority, however, the spectre of death is what really nudges the narrative into motion. Leaving a funeral for a friend the film never bothers to properly introduce, Redford comes across the Trail itself in the backwoods, where music cues inform us that yes, he will seize the day and perambulate through the American wilderness. A withering response from his wife, played deftly by Emma Thompson, strongarms him into finding a companion for safety, and after phoning everyone in his address book, he’s eventually packing bags with Katz, portrayed here by Nick Nolte. Despite looking set to collapse before the first mile, the two embark from Georgia to a litany of cotton-soft gags, hackneyed montages and predictable conclusions.

Many beats from the novel are ticked off, from their encounter with a staggeringly tactless hiker named Mary Ellen (Kristen Schaal)1 to stays in ratty lodges and a bizarre detour involving Katz’s fling with a married woman in Wayneswood. (“I’m a panty-ologist,” he intones in the film’s most immortal line of dialogue.) With Redford and Nolte decades older than the people we meet on the page and Daft Punk’s “Get Lucky” being roped in for a running gag, pinpoint historical accuracy isn’t on anyone’s minds. Fidelity to Bryson’s voice, unfortunately, goes off the table with it, and the main problem is his on-screen namesake. Under a script that hen-pecks at the material, Bryson’s casually penetrating nous becomes smugness purporting as noble intellectualism. He makes jibes that feel mean rather than cathartic, and when he recites observations about the trail’s history and heritage straight from the book, it rings of bloviating from a man less keen to elucidate than to toot his own horn. Redford is as much to blame as the script too, because whether he’s noticing a wild bear in a remarkably unexciting nighttime scene or getting a lift from a randy young couple in a pickup truck, he emotes little more than the mild consternation of someone stuck in traffic.

The real hero, surprisingly, is Nolte. There’s plenty of comic relief in his spluttering mannerisms (a yelp he lets out when throwing a rope got the biggest laughs at my screening), but they also communicate first-world foibles and hang-ups far better than any of Redford’s snooty comments, and they become the better motif. His gruffly sexist comments are like a hangover of a bruised life, whereas Redford’s chime-ins on dirty rhymes about women2 are annoying and risible. While Redford pointlessly saunters around with Mary Steenburgen at her family-owned motel, a parallel moment of Nolte slow-crawling into a luminously lit bed is the movie’s own catharsis via domesticity; a brief reverse-Gatlenburg that never returns. Most cunningly of all, when he’s given a meaty monologue about his alcoholism, it’s more affecting than the later peril-laden scene purporting to be the emotional climax, stunted as it is by chroma-key FX that look ripped from the dwarf mountainsides of The Hobbit. Since the film nullifies the grislier aspects of Bryson’s tale – crushing bag weight, bleeding feet, the woods’ time-blurring expanse – his underlying anguish fills the gap and saves the film from being completely tiresome.

It would be oh-so-clever to assert that the overall tedium of A Walk in the Woods were some intentional reflection of the real Bryson’s experience, such as he describes it when justifying him and Katz eventually skipping most of it in a car. As demonstrated by that same moment turning into an airless source of Act II conflict, there are much more staid designs in mind for its transition to film. Through indistinct direction that lets empty landscapes and Spotify music cues do the talking, it’s a travelogue more interested in making a buck than finding a feeling, and crying out for either a more adventurous lead or a director with a more scrutinous eye. As it is, its pleasures are found piecemeal in Redford’s galumphing co-lead, and satisfying reflection sits well outside its borders.