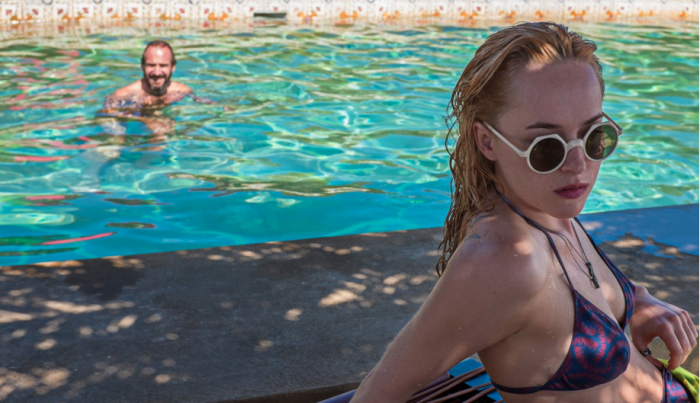 Those who have seen Jacques Deray’s La Piscine may know what to expect here in terms of plot, but Luca Guadagnino’s A Bigger Splash is otherwise refreshingly unpredictable. From our regularly bumpy, jostling rides over its rugged island terrain to Ralph Fiennes’ jarring, Rolling Stones-inspired dance moves, the film is endearingly impulsive; mercurial in the best of ways. This is perhaps a fitting representation of Guadagnino’s status as something of an outsider in contemporary Italian film: a scholar turned director. Despite influences that range from Thomas Mann’s operatic novels to Douglas Sirk’s colourful melodramas, his is a voice that remains original and inventive.

Just as Guadagnino looks to deconstruct Deray’s original and its own dismantling of social boundaries, so his visiting protagonists tear down any semblance of a serene rural escape. At least, this is the plan harboured by Harry (Fiennes) who appears hell-bent on reclaiming his pop star ex-flame, attempting in just about every way possible to wrench her away from an apparently strong, healthy relationship with stoic Paul (Matthias Schoenaerts). The object of his re-desire, Tilda Swinton’s Marianne, plays a rather passive role in comparison; I criticised her phonetic reading of Italian dialogue in I Am Love but here she says not a word. Apparently recuperating from some potentially career-saving operation on vocal chords, what we are left with is a character cripplingly disabled. She makes her living singing; communicates with the world through her songs, but must suddenly transmit all her feelings, fears and desires through glances; facial expressions and body movements.

The two central roles of A Bigger Splash are therefore of the physically demanding variety, though in slightly different ways, and Fiennes undoubtedly steals the show here. His every movement seems charged; his laugh more an aggressive bark, his dance the strut of a mating animal. A dominating figure, his every word is carefully chosen to needle away at its target, daring some kind of reaction just as he dares his opposite number to race the length of the swimming pool. Above all he is daring Swinton’s character to tell him of her happiness: how could she possibly be happy with such a lapdog of a boyfriend, such isolated boredom far away from the bright lights and the ego-stroking parties? To her credit, Swinton keeps the veil firmly in place: it’s hard to tell if her idle apathy is fuelled by a longing for this old life of drugs and controversy, or simply a product of prolonged exposure to it.

Fourth in this tenuous rhombus of characters is Harry’s obnoxious teenage daughter Penelope (Dakota Johnson), who perhaps best represents our own position or even that of the director. Penelope agitates just as her father does, but is essentially an observer: often found conveniently leaning against some wall or column at the edge of the frame, she watches and asks questions, perhaps to piece together fragments of her father’s history or perhaps out of sheer idle amusement. We wonder if she holds some secret agency after all, but ultimately Penelope comes to represent something pure and virginal. As in the earlier films of Roy Andersson, hers is a youthful innocence that acts as contrast to the adults of the picture, obsessed as they are with their own selfish indulgences and worrying inadequacies. Ultimately, each character is hopelessly isolated, just as the volcanic island upon which they stand.

In terms of inspiration, some have mentioned Roberto Rossellini’s Journey to Italy but I’d go one further and add Stromboli, as well as Ingmar Bergman’s island-bound studies in human behaviour. Similarly, Guadagnino’s film presents a relationship between two people who seek some kind of common, level ground, finding instead nothing but tumult. Similarly, there is this clash between contemporary lifestyles and old-world values. The pop art painting by David Hockney after which A Bigger Splash is named depicts an idyllic existence; one of air-conditioned afternoons broken only by poolside cocktails. Guadagnino juxtaposes this against his swimming pool’s surrounding villages with their timeless traditions of cheesemaking and town square festivities. Curiously, it is Fiennes’ party-loving character who seems most in touch with such ways of life, just as he seems most at home inhabiting his own skin.