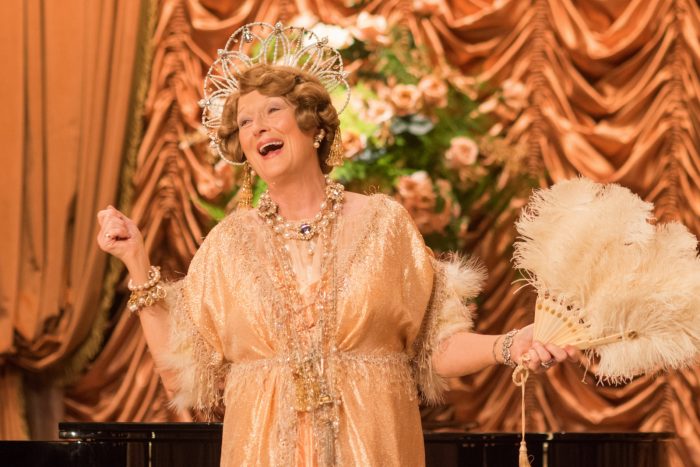 Midway through Florence Foster Jenkins, Stephen Frears’ new film about the eponymous socialite with delusions of opera grandeur, an elderly theatre patron offers her appreciation of the notoriously tone-deaf singer: “I don’t hear very well,” she croaks, “but I just think that madam is magical.” It’d be easy to accuse Frears of cynically pitching his film at the same kind of undiscerning senior citizen audience, a market that’s served him well with The Queen and Philomena and is apparently now so lucrative that it’s being fed two riffs on Jenkins’ life in the space of as many weeks. 1 Yet despite featuring a running gag about potato salad, Frears’ film is smart enough to operate as its own in-built critique. Ostensibly a toothless celebration of so-bad-it’s-good art, it also quietly interrogates the audience’s relationship to the product—who’s to say what’s good or bad, the movie contends, and if the audience is enjoying it, does it really matter?

Distilling its subject’s life into an effervescent period cocktail, the film picks up in 1944, with the 60-something Jenkins (Meryl Streep) a wealthy, established patron of the New York City arts scene. Comically oblivious in her aspirations to be a great opera singer, Streep plays Jenkins with a mixture of empathy and camp caricature, while everyone around her turns a blind eye to her terrifying absence of talent—so long as the economy that feeds off her runs smoothly. Chief among these sycophants is her toyboy-of-sorts St. Clair Bayfield (Hugh Grant), a failed actor who’s maintained a 25-year chaste marriage with Jenkins—who suffered from syphilis contracted as a teenager—while conducting his own affairs on the side. Grant’s been missing from lead roles for several years now, and he makes an effectively rumpled St. Clair, a middling actor who’s just convincing enough to maintain the charade of fandom for his primary source of income.

Such carefully orchestrated illusion is the engine for Nicholas Martin’s largely comedic screenplay, offering a running commentary on the expediency of those who would rather see their pockets furnished than burst the bubble of artistic ineptitude. It’s an all-too-familiar arts world, with its talentless rich people doing each other favours, but it’s played more or less for warmth; despite the creative corruption at work, the film suggests that upholding the personal fantasy of an ill woman is preferable to the grim reality, and that keeping the goose golden is somehow both a profitable and big-hearted gesture.

For the most part this approach works, with Streep’s magnetism as a performer going a long way to furnishing the film’s sense of cheerful delusion. Though the script doesn’t give her a lot of room to move dramatically, Streep’s vibrantly funny here, walking the tightrope between lampooning Jenkins’ squawking-chicken vocal stylings and bringing a degree of empathy to her plight. As St Clair says at one point, mockingly but with more than a shade of conviction: “The lady is an eloquent lesson in fidelity and courage.”

Yet there’s also something gently satirical to Frears’ picture; an awareness of the material’s deceptively middlebrow mandate. Florence is at its most interesting when the director is toying with—if hardly outright implicating—his Sunday matinee audience. As Jenkins’ fame improbably escalates, thanks in part to a hit record that’s caught on as a novelty single with American soldiers, she becomes the toast of audiences both sincere and ironic—the perfect analogue, in other words, for the film’s likely demographic. Sure, Florence at times gleefully pokes fun at its subject, but the film’s greatest contempt is reserved for the “mockers and scoffers,” as St Clair puts calls them. Go ahead and laugh, Frears seems to be saying; just know that you’ll feel bad for doing so. And that you’re probably wrong.

That the film arrives at a simplistic place is probably to be expected, yet even the film’s too-neat denouement is of a piece with its tone—and might even be construed as part of Frears’ self-aware games. The heart-over-head finale is pure cheese, but by that point Florence has engendered such goodwill that it almost dares you to mock the corniness. Late in the film Frears even wheels out that greatest of all standby movie villains, the grouchy critic (played by Christian McKay), and seals the deal by painting him as the bad guy who just doesn’t get it. Like, why would he want to ruin the fun of a delusion in which both performer and audience are complicit?