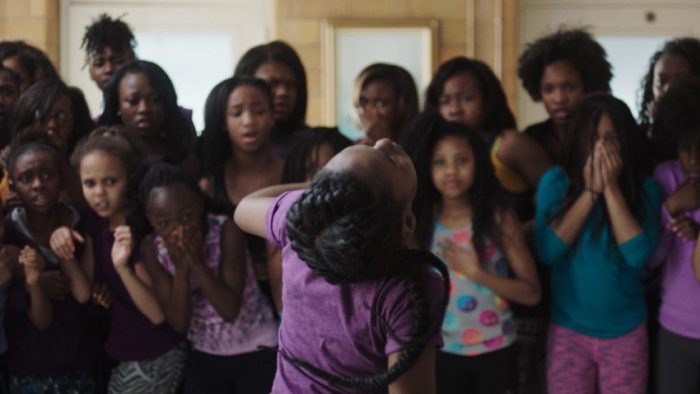 In 2015, Anna Rose Holmer was featured as one of Filmmaker Magazine’s 25 New Faces of Independent Film, amongst a diverse slate of impressive talents. This was before The Fits, her first fiction feature, had even premiered. She won the accolade as a result of her varied cinematographic work, including a rich study of rural America in the feature documentary Twelve Ways to Sunday (2010). Now, as her outstanding feature fiction debut is developing traction at festival screenings around the world she is getting some well deserved recognition amongst a wider audience. Developed and produced through the Venice Biennale Cinema College program, it premiered at the Venice International Film Festival in 2015 and has been on the festival circuit ever since, landing distribution with US indie champions Oscilloscope.

In her transition from documentary to fiction filmmaking Holmer wields an extraordinarily tight grasp on her audience. The Fits is an incredible exercise in attention, and tension, courtesy of a masterful fusion of visual and aural style. With a story developed in association with producer Lisa Kjerulff and editor Saela Davis, The Fits focuses on high school age dancers and boxers in the shared space of a recreation facility in Cincinnati’s West End and generates an intimacy with its subjects that is rarely felt in American cinema. For Kjerulff, it was important that the work be created through “on-location immersive filmmaking [and] collaborating with a community.” The range of Cincinnati venues, parks, and street spots provides the film’s atmosphere of precision with a brush of realism. And yet, with minimal dialogue, it’s a realism that, as the film’s narrative slowly brews, merges with the surreal.

Shot by cinematographer Paul Yee, The Fits pre-laps an aural layer of rhythmic breathing before leading into the opening shot: a focus on eleven-year-old Toni (Royalty Hightower) as she practices sit ups to a phantom beat. Toni is a boxer who trains regularly with her older brother, Jermaine (Da’Sean Minor), and his friends. She is strong and self-controlled, but when amidst a sea of testosterone, she seems lost in a confusion of desire, admiration, and jealousy. Yee’s camera repeats this close framing motif throughout the film — most impressively with a three-minute long take at a pedestrian overpass — emphasising Toni’s continuous movement, her ritual performances of sit ups, pull ups, skip rope, and star jumps. She is continually isolated in the frame, and isolated, withdrawn, into her own unspoken thoughts.

A first-time film actor, Royalty Hightower’s performance here is essential, not only in her controlled physicality but in the subtle expressiveness . She embodies Toni’s disciplined attitude towards fitness and, with an extensive range of subtle expressions, carries herself with both fierceness and fear. An outsider, Toni seems drawn to the fluid moves and femininity of the dance team in the same training facility. Desiring acceptance into this other world, she practices some moves privately in the gym, conjuring aural echoes of people cheering in her imagination.

After her brother’s encouragement — “the only way you can lose a fight is if you don’t get in the ring” — Toni auditions for The Lionesses (played by the local Q-Kids Dance Team), and becomes a part of the younger team, The Crabs. It’s clear that she isn’t a natural, and can’t coordinate her moves — but Hightower has been dancing since the age of six, so it’s all in the character. As Kjerulff says, collaboration was an integral part of this filmmaking process, and it pays off absolutely, with engaging dance sequences that were choreographed in consultation with the kids themselves.

Just as Toni begins to gain confidence as a dancer, a mysterious phenomenon affects its senior members; first, the captain Legs (Makyla Burnam), then Karisma (Inayah Rodgers), who takes her place. Gradually, more and more members are temporarily debilitated by these spasmodic fits. Holmer isn’t the first filmmaker to explore sinister happenings in high school athletic cliques; think of the mysterious witch activity targeting the cheerleaders in the first season of Buffy the Vampire Slayer (Joss Whedon, 1997), or the sillier Satan’s Cheerleaders (Greydon Clark, 1977), which might explore things like female sexuality and imposed teen hierarchies. But The Fits is so affecting precisely because it offers little narrative explanation for these occurrences.

With almost no adults in the film — apart from the supervisor of the dance team, and some authority figures distorted or blurred in the background — the strange events amongst members of The Lionesses seem, potentially, manifestations of Toni’s imagination. Or even, perhaps, an affected performance of “cool”, a rite of passage. For Toni, Legs is the embodiment of femininity, and the fits interrupt and attack this adolescent desire. During these fits, the camera remains focused on Toni’s face, and links the sound of the moments very clearly with her perspective. Unlike other dance films, which might emphasise the importance of friendship and community, The Fits ultimately finds beauty in being alone.

On other occasions, the camera captures Toni, in close up, pinching herself, and later scratching at a temporary tattoo on her upper arm, which stimulates a visceral sensation of recoil, as sticky flakes of a rainbow flower fall stubbornly from her skin. Although these moments are brief, they are very affective, and restrict the film’s atmosphere, engaging with the surface of the body as a medium. She pierces her own ears with a needle in front of a bathroom mirror, and picks off her chipped gold nail polish, encouraging a similar embodied response. For Holmer, to whom being a teenager is like being “at war with your body,” these are literal manifestations of that tension, of trying to shed an unwelcome, and ever tightening, skin.

The music, composed by Danny Bensi and Saunder Jurriaans, pulses between hollow percussive beats and slow groans of low register woodwind. Recalling their scores for tense psychological thrillers like Martha Marcy May Marlene (Sean Durkin, 2011) and Enemy (Denis Villeneuve, 2014), it consistently encourages a restriction of breath, which is finally set free with a final sequence accompanied by Kiah Victoria’s “Aurora”. At its heart, the music and sound design is all about sensory experience, attuned to the onscreen body — and the audience body’s immersion in the screen. Yee has experience in this kind of approach, with a strong catalogue of music videos (including White Hinterland’s ‘Baby’, directed by Holmer) and art and music documentaries, and the visual technique here displays that same absorbing control of the frame. Yee and Holmer both have backgrounds working with music, and appreciating the expression of art forms, wholly on display here.

The Fits may be framed around adolescence — fitness, hysterical fits, and fitting in — but it is a sophisticated exploration of sound, image, and rhythm, where movement and music are combined to make the film dance.