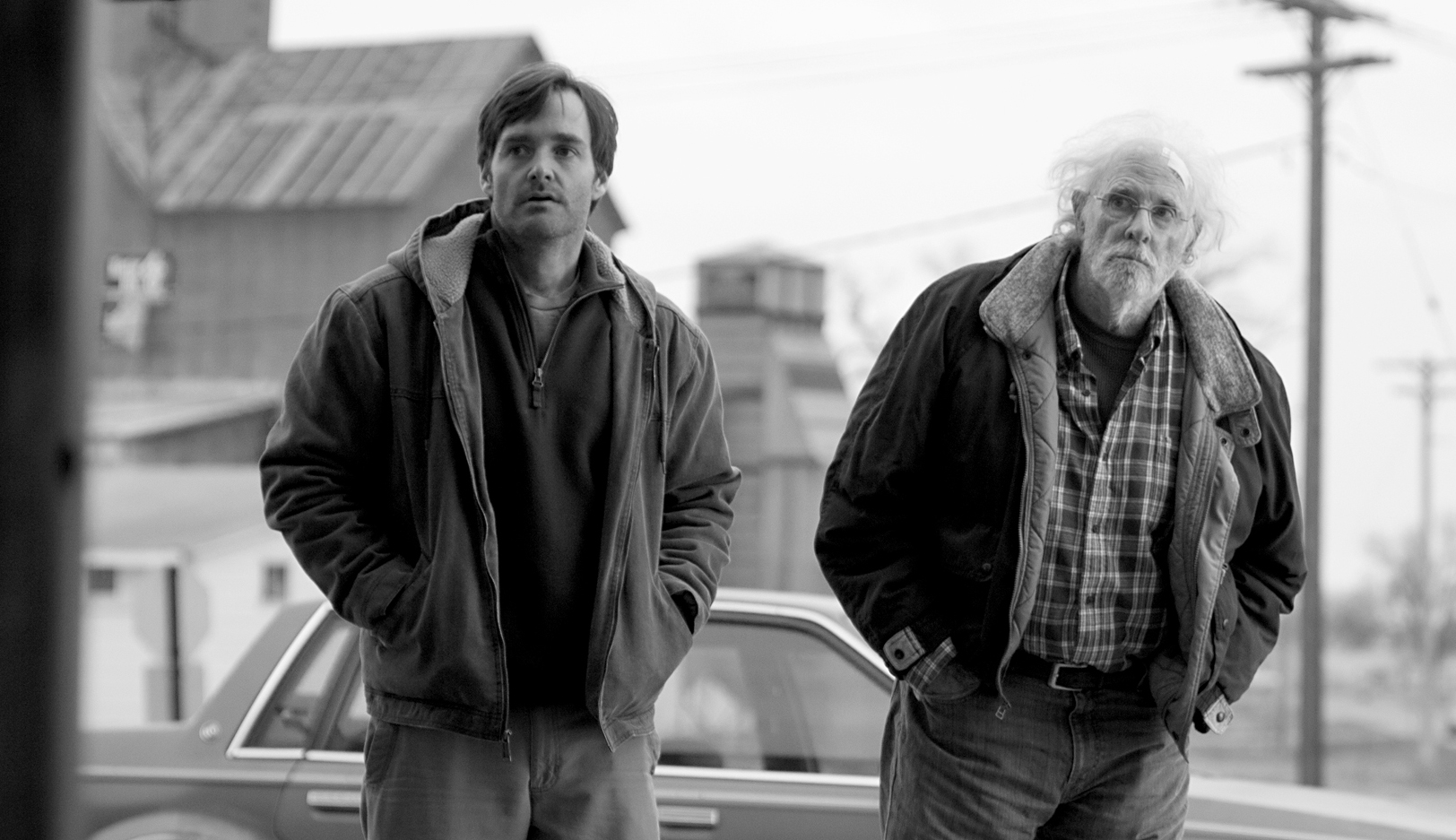 And the Academy said: the wise punter who enjoys betting on Oscar results shall refrain from throwing his pennies at Alexander Payne’s ‘Nebraska’, for 2014 is the year of babes, guns and lasers.

And so it was. Despite Nebraska’s impressive six nominations at this year’s Academy Awards (including best feature, director and screenplay), the stark, black-and-white road movie never achieved the buzz – nor the widespread recognition – that would have established it as a viable contender in the Oscars race. Not that it would have wanted that anyway. With all the high octane productions in the running for top spots this year (Gravity, American Hustle, Wolf of Wall Street), Nebraska seemed as endearingly out of place as a grandfather at a twenty-first birthday party. And, after a string of Oscar successes with Election, Sideways, and The Descendants, director Alexander Payne appeared quite happy to take the backseat in this year’s procedures: “Nebraska is a bit more modest in scale, but it keeps being included in the conversation, and that’s very nice.” Run along, kids.

Like the American heartland that serves as backdrop to the film, Nebraska harks back to a more subdued era – one of slow living and straight-talking that lives on as distant folklore in the minds of North American urbanites, and that sits incongruously in the pool of current pool of must-see features. Following the underwhelming lives of a couple of equally alienating and charming Midwesterners, the film opens with scraggly Woody Grant (Bruce Dern) wandering down a highway near his home in Billings, Montana. The local sheriff stops Woody before he can embark on his 800 mile journey to Lincoln, Nebraska, where he plans to journey on foot to collect the million-dollars sweepstakes he believes to have won. Described as a “dumb cluck” by his plain-spoken wife (a charmingly acerbic June Squibb), Woody will not be deterred, even after his entire family attempts to make him realize that his ‘big win’ is simply a marketing scam.

The one to pick up his father from the sheriff’s department, Woody’s son, David (former Saturday Night Live performer and full time MacGruber Will Forte) has been in on the old man’s plans from the beginning. David’s life doesn’t seem to be going anywhere either, given his unsatisfying job selling stereo equipment and a recent, messy split with his girlfriend, so he decides to drop everything and drive his father to Nebraska.

As in the best road movies, you’ve got to drop out to tune in: embarking on a journey across sweeping plains of South Dakota – captured by Phadon Papamichael’s striking black-and-white camera – the two men are taken into themselves and their shared family past. Stopping en route in Woody’s old hometown, the men bump into old sparks, one-time business partners and a pair of troglodytic, macho cousins – all inevitable tests that will bring the undemonstrative father and his eager-to-please son together on a new level of understanding (‘intimacy’ is perhaps too strong a word to describe Dern’s ice cold Woody).

Payne has received mixed reactions to his portrayal of Woody’s extended family as simple, boozed-up Midwestern folk, but it saves to remember that Payne is an Omaha native, and this is not the first film the he has shot in his home state. “Each film is somehow a snapshot of where I am in time,” he has said, elaborating on the notion of authenticity his depiction of the American Midwest. “When I shoot there, I feel more confident in how people would be, how they should move, whether they would kiss in this situation or not, how much distance they would stand away from each other.”

Dern shines as the impenetrable old patriarch: despite some humorous attempts to assert his status in old age, these more often than not end with David receiving the bad end of the stick. It seems Woody’s sole mission – aside from collecting the million dollars – is to get on his son’s nerves. The film is divided into a number of increasingly ludicrous situations in which David’s ability not to throw a punch at Woody becomes increasingly admirable, including a hunt for his father’s false teeth that he lost after falling at a train station in a remote town. After an extended period of hunting, David brings Woody a pair of teeth, which he insists are not his own – only after several minutes of quiet refusal does the old man snap at his son, “Of course they’re my teeth. Don’t be a moron.”

Largely known for his supporting parts as psychologically unstable villains, Dern’s diverse screen pedigree is allowed to shine in this rare leading role, and he lends this easily unbearable, ‘old codger’ character the kind of silent heartache that reads of a full life. Upon realizing that the million dollar promise was a hoax, Woody’s reaction to his extended family’s ridicule shows the kind of silent, devastating restraint made Dern so memorable in his Oscar-nominated role as a cuckolded marine in Coming Home (1978).

I have to admit that I took some time to feel invested in these characters, most likely because it took so long to feel that the impetus for their journey – the foundation of any road movie – was in any way believable. Woody is a man on a mission, and no obstacle will fall in between him and his million dollars – but these are cynical days in cinema, and it feels almost rebellious to produce a script as small in scope as Nebraska at a time when boundaries of sex and violence are being crossed and flaunted the film community every day. How could anyone be so… naïve? And in this day and age? It’s an archetypal tale of big dreams met with a big slap in the face – one of the oldest tropes in filming storytelling, and a tried test of narrative ingenuity wrought to perfection in some of the most iconic films of the last eighty years: from The Grapes Of Wrath through to Alexander Payne’s 2004 film Sideways and its unforgettable tale of escaping middle aged regret and loneliness in the Californian wine country (which, with About Schmidt and The Descendants, makes his last free films road movies.)

Payne had been circling Dern for years in the lead-up to production, a decision which the actor has described as ‘the role of a lifetime’, a profilmic gesture that completes the sense of this film being Payne’s way of paying his dues to both a national and cinematic past. Nebraska is one of those films that, without ever quite soaring, manage to paint a slow and meticulous portrait of age. And it’s beautifully shattering. Old age – and the fear of being altogether forgotten – hangs over both the man and the community at the center of the film, as they face the reality of their social irrelevance. Sound nostalgic? Without a doubt – but hey, if you can sit through a proud, windswept Bruce Dern in his first leading role in in twenty five years cry, “I’m running out of time!!” and not feel something, then you are a Gen Y through and through.

In the same way as The Artist, it will require you to suspend your disbelief – and your cynicism – in ways not many of us are accustomed to these days. That said, there’s something so genuinely refreshing about being transported into a world where desires are somewhat transparent, disagreements with the town bully are resolved by a (fabulously satisfying) punch in the face, and the logic behind Woody’s quest for a million dollars is as bafflingly simple as it is fundamentally human. In a telling moment when Woody arrives at the marketing office to collect his sweepstakes, a visibly troubled secretary asks his son, “Does he have Alzheimer’s?” “No.” says David, “He just believes what people tells him.” If Payne wants us to take something away from this film, it’s that America has seen simpler days – and that our skeptical age is not necessarily the wiser.