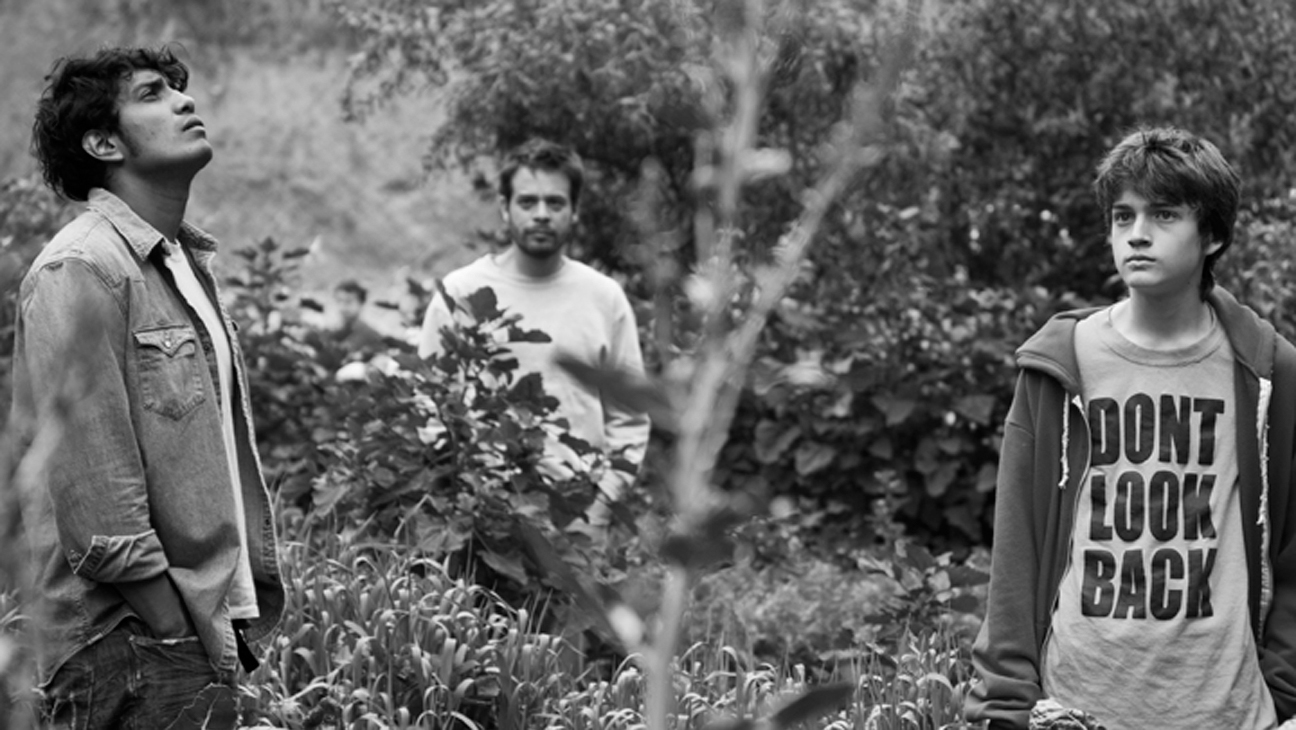 Influenced by the style of Italian Neo-realism, and French New Wave cinema, Mexican director Alonso Ruizpalacios, in his most recent film Güeros, creates a vivid black and white world that depicts the anxieties and frustrations, the yearning for freedom and the idealistic sentiments of youth during the 1999 student protests in Mexico City. This world serves as the unstable setting where we witness, through the eyes of a young boy, the rekindling of his once lost relationship with his older brother, re-connecting with each other through a journey across various city landscapes within Mexico City.

In the first minutes of the film we see Tomas (Sebastian Aguirre), a young pre-teen boy who lives with his mom on the coast of Veracruz, playing with his friend on the rooftop of his apartment building. Beautifully shot by cinematographer Damian Garcia, the opening scene is a series of jump cuts from the boys making a water balloon, to a woman who is distressfully packing her belongings, as she is about to run away from what is suggested is an abusive home environment. With baby in hand, she walks frantically out the door, and to the street where Tomas and his friend are waiting for their next ‘victim’ to walk by. The feeling of anxiety is juxtaposed with that of waiting, and precision through the use of the hand held camera movements in contrast with jump cuts of almost still images showing the two boys waiting patiently by the edge of the rooftop. Eventually, we experience up close, through the movement of the camera, the balloon as it is falling right above the baby’s head. The next is a series of shots following Tomas who is trying to escape the angry neighbors and horrified mother. Finally, Tomas’ mom finds him and tells him she can’t take care of him anymore so he is to go to the city (Mexico City) and live with his older brother Federico (Tenoch Huerta).

The overarching plot is a familiar one – the journey of a young boy coming of age as he discovers a new world, and himself, when he embarks on a trip with his older brother and friends. The friends are Santos (Leonardo Ortizgris) and Ana (Ilse Salas) who two contrasting personalities who depiction is ironic by nature, reflecting a critique of the characteristics that exemplify youth among the different social classes in Mexico. Ana comes from a ‘nice’ family, and has become one of the leaders for the student protests, rejecting her identity of the ‘nice’ or preppy girl when convenient, but also using it for her advantage as she pleases. Santos is more of the quiet, introvert friend who is loyal, and sensitive but finds it hard to take sides or have opinions about anything; he lives in a beat up apartment with Federico, and like him, he is also “protesting the protests” by taking no sides, drinking beers and smoking cigarettes in the meantime.

Forced to live with his older brother who suffers constant panic and anxiety attacks, Tomas becomes the thread that unites, and takes the three dysfunctional friends on a trip. The trip is triggered by the newspaper article that announces the almost death of Tomas’ favorite musician, Epigmenio Cruz, an idol introduced to the brothers by their diseased father.

The sound in the film compliments the black and white aesthetic, sometimes in the careful attention to minutiae of mundane environments where the noise of chewing carrots works as source music. Other times, the sound complicates the duotone images such as when we see and hear a cacophony of sounds as the student protesters paint over a Siqueiros mural at the University, along with the sound of drums, conversations, and songs. Alienation is emphasized through the sounds, or the lack thereof, as we hear the racket made by the protesters. It is in the absence of sound when we see the brothers listen to Epigmenio Cruz’s music on the Walkman that one might feel isolated from the characters and, as this intense intimacy places us reminds us of our place as viewers and outsiders to this personal world.

Güeros forces the viewer to be tolerant and patient, just as the characters’ agendas seem to be both sudden and lackadaisical, we as viewers have to take our time and embrace the moments in the film. The careful, thoughtful visual decisions within every frame, in combination with the spontaneous, effortlessly constructed plot makes for a pleasant and fresh viewing experience.