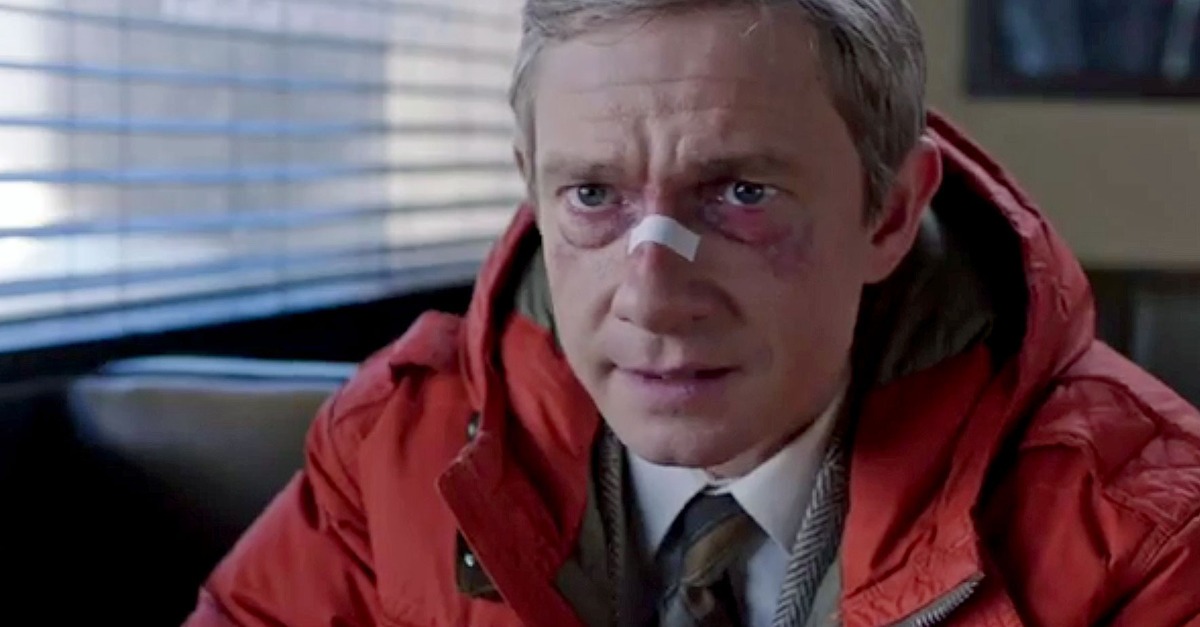 Eighteen years ago, the Coen Brothers gave us a film so deliciously acrimonious in its conception and execution that it became a darling of the critics and audiences alike. Fargo was one of the championed favourite films of celebrated critic and commentator, Roger Ebert. It established a brand of filmmaking that would, in the years to come, be termed “Coen-esque”.

Incidentally, 1996 also saw the release of David Foster Wallace’s staggering and oft divisive magnum opus Infinite Jest and the beginning of A Song of Ice and Fire, the series of novels by George R.R. Martin. Fast forward to 2014, and the impact of Wallace as a postmodern social commentator has been quite significant, such that we now have a mainstream Hollywood film featuring Wallace (The End of the Tour), who is being portrayed by Jason Segel.1 On the other hand, the years have also been kind to Martin, who, due to the intervention of HBO – and the subsequent adaptation of the books into the continuing television series Game of Thrones – has become the most well-known geriatric in recent memory.

Furthermore, before the release of the television series, there was a sense of fatalism surrounding the ambitious project. Fargo is such a beloved film for so many that it would been justifiable to think that anyone attempting to touch the original would soil it, suffocated by the girdle of their own ambition. A trickier proponent was the responsibility of adapting a Coen Brothers’ film itself. How best to recreate the “Coen-esque” nature of story-telling, whilst creating a substantially original piece of work in the process?

But, in a result that can very well be termed as a most conclusive riposte to hasty judgment, FX’s television series Fargo has somehow managed to mix all ingredients in the right proportion and created a series which is worthy of standing on its own two feet, as well as offering enough Easter eggs to those familiar with the film.

Like the film, the television series also begins with the bold proclamation – “THIS IS A TRUE STORY”, albeit with a different timeline – “The events depicted took place in Minnesota in 2006. At the request of the survivors, the names have been changed. Out of respect for the dead, the rest has been told exactly as it occurred.” You’d be forgiven if you confused the submissively neurotic Lester Nygaard (Martin Freeman) from the television series with Jerry Lundegaard (William H. Macy) from the film. You see the endless cold, deserted ice of Minnesota and you’re reminded of the Coen Brothers’ recreated ‘Siberia’ from the film. The opening scenes of FX’s Fargo lull you into a false consciousness that you’re watching a frame-by-frame exposition of the film counterpart. Those who’ve seen the film think they can chart Lester’s actions, and hence the show’s narrative, essentially, because of what they know of the film. You think you know what’s about to unfold; itching to give the person sitting next to you, who’s experiencing the world of Fargo for the first time, the I-knew-this-was-going-to-happen face.

Just when you think you’ve gauged the familiarity, writer and creator Noah Hawley changes the script so surreptitiously that your curiosity is tickled in earnest. The pilot makes some fundamental changes to Lestor/Jerry’s narrative arc, which set it apart from the film and has undoubtedly opened up possibilities that make the show more original, with only a few borrowed elements.

Billy Bob Thornton, who plays a shade of Anton Chigurh from No Country For Old Men – if the already explicit Coen reverence wasn’t enough – is convincingly menacing in his portrayal. However, his character is quite one-dimensional thus far. It will be interesting to see if there are some shades to his character that transcend caricature in the coming weeks. The concept is quite interesting nonetheless. A man who has no allegiance to morality (Thornton) meets a man who has been living in fear from everyone and everything all his life (Freeman) and turns his world topsy-turvy. The scenes where Thornton persuades others’ of his view are exemplary. When he convinces the officer who pulled him over (played by Colin Hanks, the eldest son of actor Tom Hanks) for speeding to let him go or face death, his voice has an eerie calmness that conveys a chill more insidious than what you could fathom.

Despite the mix-n-match of Coen Brothers’ filmography, the heart of FX’s Fargo is the essence of its film counterpart – the law enforcement trying to solve murders in a town of lived absurdity, of people who aren’t consciously aware of the Absurd. There is quite a beautiful exchange that occurs when Deputy Molly Solverson (Allison Tollman) interrogates the work colleagues of a murder victim, trying to find out his background history:

Colleague 1: Nice guy too. Super. Such a pity. Gambling problem I heard.

Colleague 3 (Bob): I heard, he like, slept with a thirteen year old girl.

Colleague 1: For Pete’s sake Bob! Don’t spread rumours about the poor man. (Pause) Nah, it was gambling. For sure…

Thornton, the agent of chaos, the catalyst, makes each of these characters become more self-aware in different ways. The realisation – of living a life characterised by absurdity – is too much to bear for some, whilst for others, it’s just the push they needed to act out their primal desires.

David Foster Wallace, whilst discussing Kafka, opined that he found it almost impossible to get his students to see that Kafka was funny. He lamented the fact that students would often miss the essence of Kafka’s humour and in turn, would get caught up in analysing the exformative associations. According to Wallace, the central Kafka joke is that the “horrific struggle to establish a human self, results in a self whose humanity is inseparable from that horrific struggle.”

Thus, leaving the recursive wordplay humour and other exformative associations aside, the world of FX’s Fargo is one where the people in it are defined by their horrific struggle; the struggle which in the end, proves futile. Still, it is funny (or somewhat depressing, depending where your sentiments lie) to see the characters try.

With top-notch performances by the cast, surprising plot twists and a distinctly “Coen-esque” feel, the television adaptation of Fargo should not be missed.

The television adpatation of Fargo premiered on 1st May, 2014 on SBS One, for Australian audiences. It can be seen on SBS OnDemand.