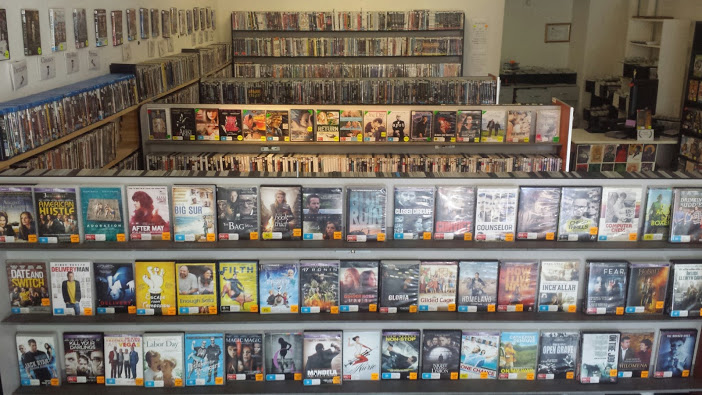 As a lover of video stores, it’s always particularly exciting to discover a new one for the first time, though Film Club in Darlinghurst may be the Sydney cinephile’s worst-kept secret. A reputation for an incredible selection and a friendly and knowledgable owner/manager means for many Film Club is the perfect movie store, and one we absolutely had to check out. It doesn’t disappoint. Bracing myself for a barrage of Tom Cruise action movies staring back at me when I walk in, I’m pleasantly surprised at the sheer amount and variety of films on offer. On the first shelf I approach, the Blu-rays of The Wolf of Wall Street and 12 Years a Slave are given no more prominence than Short Term 12 and Bela Tarr’s The Turin Horse (one of the many imports you’ll come across). It’s also the first Video Store I’ve seen to have Apichatpong Weerasethakul’s Tropical Malady and Pier Paolo Pasolini’s documentary Love Meetings in the front window.

Among the usual umbrella categories – Cult, Action, Comedy – my eyes are drawn immediately to the Directors section, a curated wall of directors by surname, far more comprehensive than you might imagine. Among the scores of Hitchcock or Bergman movies, strange auteurist curios pop up that would thrill and surprise the most hardcore film buff – I didn’t know Douglas Sirk’s Summer Storm had been released on DVD anywhere, let alone available in a Sydney store – so that you could spend many hours perusing the shelves.

The store is carefully arranged and its slick, impressive branding and logos combined with neatness and order almost hide the wonderful variety and idiosyncrasy of the place – there are shelves full of recommendations, but I have no doubt talking with owner Ben Kenny would reveal hundreds more. Having inherited the store (formerly Darlo DVD) almost three years ago, Film Club is clearly more than just a job he is very good at – throughout our conversation customers come into the store who he’ll greet by name, and talking with him his love for movies and talking with people continually shines through. Leaving the store, I couldn’t help but reappropriate that old beer ad – if Film Club isn’t your local video store, move house.

Reading through some descriptions on other sites and so on, the word that kept coming up is ‘curated’. How well does that word describe your approach to the store, and how does that differ from the Mom ‘n Pop or franchise video store?

I think curated – that’s a word I often use, or ‘boutique’ – in that it’s a very carefully laid out selection, it’s responsive to people’s requests, and also trying to have a good overview of film history, not veering to far into pretension, or too far into trash…

Yeah, the happy medium or a bit of everything I’d say.

The other thing that struck me was your website – a Tumblr style collection of bits and pieces that is a lot different from a regular video store site.1

Well many don’t even have web sites. With ours I wanted to have something that gave that sense of free association of browsing a video store as well, something more than just Daily Specials or New Releases, something a bit more conversational or visually stimulating.

Cool. And you’re clearly a film buff, so when you started this store what were the…say for example, some films, directors, genres, that a Ben Kenny store was always going to have featured?

Essentially, I guess I have a sort of nostalgia for my young days going into video stores and the old video stores in the late 80s or early 90s, and the eccentric little surprises you’d find tucked in there. So I wouldn’t say there are specific subgenres, but trying to surprise people, trying to have things that people wouldn’t expect us to have, or that people have never heard of.

And have you found the Film Club regulars responsive to that that approach? Are they often asking you for recommendations, for guidance?

Absolutely, a lot of people – either regulars or just occasionals – ask me for advice. Some people will literally just take something from me unhesitatingly, others I can recommend ten things to and they’ll go home with something else. A lot of it is sensing one’s mood or one’s taste, and having a barometer of what someone’s looking for and trying to nail that.

And the Film Club regulars – on the one hand this is a great area for this sort of thing, near the Chauvel Cinamatheque and other cultural spots, and on the other hand it seems like the type of store where people would go well out of there way to go to. How important is Darlinghurst to your store? Who are the regulars?

Being in Darlinghurst is a pretty important part of the store, I do consider this the nexus of the Sydney – or the Australian – film industry, between Fox Studios, directors living around here; there is probably a higher concentration of industry people than anywhere in Australia. So I’d say the people are half-half, we do have people for whom we are just the neighbourhood video store, and then we have people travelling from the North Shore, from the suburbs or the West. Being in the CBD helps, being so easy to get to.

Right – now, I didn’t want to get into the age-old ‘death of the video store narrative’ but I noticed recently, someone on Twitter recently pointed out that alarmingly Netflix, for example, only has three films from 1939, which begs the question – are video stores becoming more relevant or more important to preserving film culture?

I don’t know about more relevant; I think the internet has done a lot of good things in terms of archiving classic films, there is a wealth of stuff available, stuff that wasn’t on VHS or DVD, but someone had a copy and they uploaded it and now anyone can watch it. But I guess it comes back to the curation aspect, that you can find just about anything on there, but you need to know what you’re looking for, whereas having a small store with 10 000 titles narrows it down and makes it easier to select something. So yeah, not just with movies but I think we are overwhelmed by the glut of media, so its as important as ever, if not more important, to have it all under one roof, to have it tangible and findable, I suppose…

…and to have a guide to show you through it.

Now at least out of my own interest, what stood out for me is the Directors section. What was the thought behind that, and is that a popular selection?

It’s by far our most popular section, and it started smaller. It started specifically from a few people asking for Woody Allen films, and it became an initative out of me scrambling between the cult, drama and comedy sections, and finally condensed that down to having them all together, and it got really popular. It kind of grew from there, and I added more directors to it and as I put more directors in there, it made me more determined to complete them, to have entire filmographies of certain directors, and that’s how we ended up with Kubricks like Fear and Desire and The Killing, every single little film that he’s done, as having that section there has made me determined to seek them out. And it helps too, rather than having these sort of obscure films from directors hidden away in the thriller or action sections, or comedy, they’re more prominent.

And I suppose that is quite reflective of the audience that come here, for whom the director’s surname might be important.

Yeah! Especially with a lot of film students coming in, literally looking for Billy Wilder films, and I also find it helps as that’s certainly how I watch films most of the time – I’ll see one film by a director and think “What else has he done?’ and go back and watch their entire filmography so yeah, it’s partly responsive to what customers like, and partly a reflection of my own way of looking at films.

Are there any sort of strange favourites that always come up? Maybe left-field choices you get a strange amount of requests for?

Not too strange, but Blowup tends to go out every single week, maybe because it was never released in Australia, we’re one of the few stores that have it, and we have three copies…

Yeah, it’s an iconic film, a cult 60s film. But there are certainly some surprising ones. I’m often surprised – I get just about anything someone requests, if I think other people might be interested in it and I’m often surprised what people do respond to and what they don’t. For example we got Condorman, a Disney flop from the late seventies. Very much maligned, and not a very good film, and yet it paid for itself in the first week, and people ae excited to see because it has some nostalgia value from when they saw it when they were five. So once again, it goes back to surprising people, and tapping into the connection they have to movies.

Ok, last thing –a couple of recommendations. Maybe something for film buffs, that you might only find at Film Club?

Ooh, I’m a big fan of Jacques Tati’s films, even though he only made six films in his career, there a couple of obscure ones, the last couple he made, Trafic and Parade. Parade is very unfairly looked over, like a circus performance that was made for Danish television I think, and yet it’s so full of joy, so pure, that I never get tired of watching it. Synecdoche New York is a great one, that seems to have passed by a lot of people, perhaps seen as difficult or a bit of a slog but I find that to be very profound, beautiful and sad. Terrence Malick’s The New World also seems to have missed a lot of people, despite acclaim for all his other films and it’s beautiful! I think a lot of people dismissed it, “it’s Pocahontas” etc. But what else? Especially suggesting for film buffs – it’s hard, no matter how far off the fringe you want to recommend, someone will go “of course, that one”. Shut Up Little Man didn’t get much notice, but it’s a really interesting little story. An American story, but made by an Australian director, and its just a very offbeat, odd, sweet little documentary.

To wrap up, what is Film Club, to entice new people to check it out?

The last, best hope for finding the best films of all time. But also, just having a community institution, like a record store or a café that people can feel some connection to the neighbourhood, people who just moved in this week and we’re almost their first stop, sometimes I feel like the welcoming committee – Welcome to Darlinghurst! – and I do think that’s important. As people get more isolated – I think theres a push in society to keep us isolated, to be passive consumers whereas I want people to think a little more and engage with the community. I have plenty of people come in as much for the conversation as the movies, and that’s an essential human need, human contact, to be understood and to belong, so I like to think of us as that as much as a movie store.

Film Club is open every day from 11am – 9pm, at 136A Darlinghurst St, Darlinghurst – ph: 9931 8105. Their Facebook page is here, and we’d also suggest following their particularly witty Twitter account here.