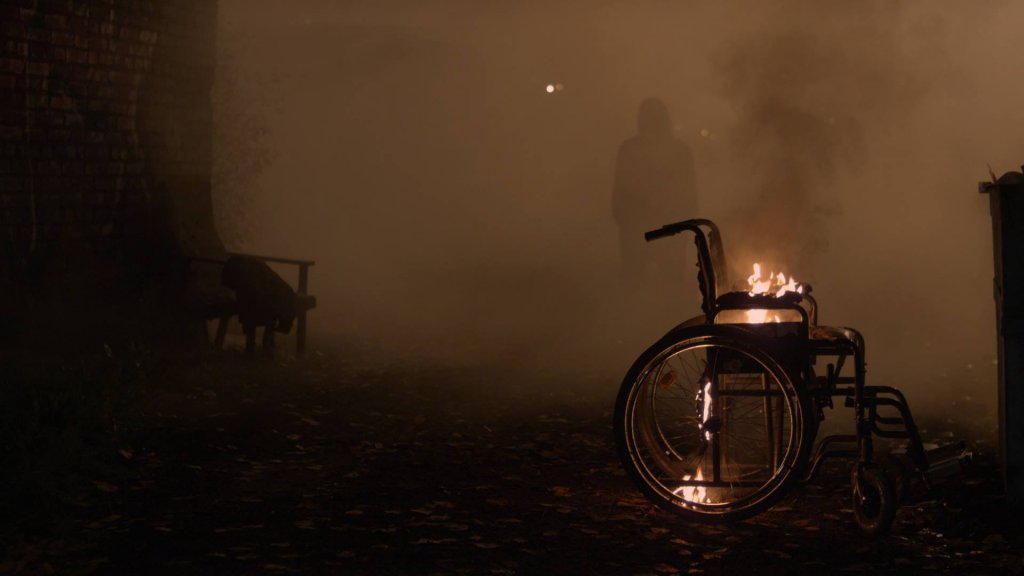 A virile teenager caked in the atomised spoils of red dust and aerosol, cast up by his violent thrashing, hurls a wheelchair against a dilapidated industrial wall in a montaged catalogue of anguish. After a prolonged and childlike attempt he finally sets it alight, wandering off into the mist as the smell of burning rubber seeps through the camera’s lens. Equally beautiful and brutal, an image of abuse, neglect and infantilised violence pervades Ivan Tverdovsky’s hyper-real drama Corrections Class, and while not for the faint of heart, there is certain value in the harrowing insight it provides into the mistreatment of disabled youth in Russia.

Set in a ghettoized and nondescript post-industrial Russian suburbia (think Andrea Arnold’s Fish Tank but wrung of another few shades of colour), Corrections Class instantly establishes the inescapable bleakness of its characters’ lives. It follows the trials of Lena (Maria Poezhaeva), a wheelchair-bound 11th-grader, who finally escapes years of home schooling by joining her local high school’s ‘Corrections Class’ (an archaic special education class), and journeying beyond a nearby railway line, which becomes the orbital centre of a film whose tragic events often reach the point where they’re difficult to watch.

The film opens with Lena (en route to her first school day) passing a police-cordoned scene where a teenager (later identified as a fellow Corrections Class-mate) has been killed at the railway crossing (the teens later use his death as a means to get a free meal, which they then serve off his funerary portrait in their cafeteria). When Lena’s mother (Natalia Pavlenkova) implores her, “Don’t look,” the camera instead lingers on a black tarpaulin covered body resting on the bloodstained macadam, a few metres from where they awkwardly wait for the train to pass.

Hostile from the first second, Lena’s new school administration hurry her away from assembly (and the public gaze) towards the isolated Corrections Classroom (which has no accessibility ramp), and introduce her (and the audience by proxy) to a society in which equal opportunity does not exist and having a disability renders you most certainly ‘invalid’. Tverdovsky does offer some respite amid this context with the flourishing companionship Lena finds with her classmates, as they beg for money and loiter by the railway tracks, thrill-seeking by lying under passing trains. Inevitably, (as this is a post-Twilight high school film) she then finds herself in a rivalrous love triangle between the charming Anton (Filipp Avdeev) and the brutish Misha (Nikita Kukushkin), which offers the only substantial point of hope throughout the film, albeit one that also ends in heartbreak and joins the rest of the film’s narrative in a downward spiral towards transcendental oblivion.

Shot entirely in hand-held, the camera creates its own personality, with characters often sending knowing glances straight down the barrel, and at one point even interacting physically with its phantom presence, grabbing and pulling it away when the group flees from police. While at times engaging and even humorous, this device often feels distracting and almost nauseating (an issue I haven’t had previously with shakycam stalwarts like Blair Witch Project or Cloverfield). It’s a grievance that is made particularly arresting by frequent and animated group conversations, where the camera is positioned so close to the action that it must perform a disorienting flicker between faces in an effort to keep track of who is talking, all of which is amplified (to an international audience) by the language barrier.

The subtitles draw just as much attention as the shaking camera, as they too flash past at a rapid pace to keep up with the cacophonous conversations (it’s a difficulty present in many fast-paced and dialogue driven films; Bertrand Tavernier’s Quay d’Orsay springs to mind). Amid this over-saturation you can’t help but notice the auxiliary dialogue that is no doubt left untranslated amid the discord of teenage voices, distancing you from the setting. As such, it feels like a film that is idiosyncratically Russian (it was well received domestically, wining the best debut prize at Sochi’s Kinotavr festival). Subsequently, the politicised tone of the abuse depicted is framed undoubtedly as a commentary on Russia’s institutionalised ableism.

The teenagers’ descent plays out in all facets of school life as we witness the group (in particular Misha, in his violent outbursts) begin to internalise and re-enact the abusive invalidation society has dealt them. Almost every scene seems to reconnect to their defining disability, and at times Lena’s wheelchair begins to feel like it supports this message just as much as her body. Because of this, Tverdovsky’s script (co-written by Dmitri Lanchikhin) can sometimes be overbearing, and after watching scene after scene of Lena being punished for her myopathy it feels like a nefarious blow to then compose the film’s tragic (and brutal) climax with her wheelchair lingering just out of focus in the background, framing her body like an omnipresent and demonic phantom.

That having been said, Tverdovsky’s socio-political criticism goes some way in justifying just how violent and forthright his film is with the presence of abuse and neglect. Human Rights NGOs like Unicef, Human Rights Watch and Amnesty International have all documented Russia’s systemic mistreatment of disability and archaic education practices, especially in areas outside Moscow. Indeed, in a context where this issue is so pervasive, it is understandable that Tverdovsky provides such an aggressive and engendered representation.

The film’s final shot is of Lena walking, escaping the confines of her wheelchair. But this is not an image of hope. The sounds of pristine Nikes squeaking over a freshly mopped hallway mix with the growing pulse of Moritz Hoffmeister’s hauntingly industrial score; like a heartbeat melting into the percussive sounds of endless railway tracks. The beat rises in an agitated and asphyxiating fantasy, urged onwards by the camera’s gaze, which follows in a claustrophobically steady close-up of Lena’s feet, pulsing in and out of focus as she walks. In its crescendo, Tverdovsky’s film reduces even the talismanic symbol of freedom from oppression (the all important able-bodied movement) to an imprisoned expression of cyclical choking. For Lena the only way to ameliorate her abuse is to not be disabled anymore, and what this dark, brooding film implores is that harbouring such an impossible ideal is Russia’s fatal flaw.