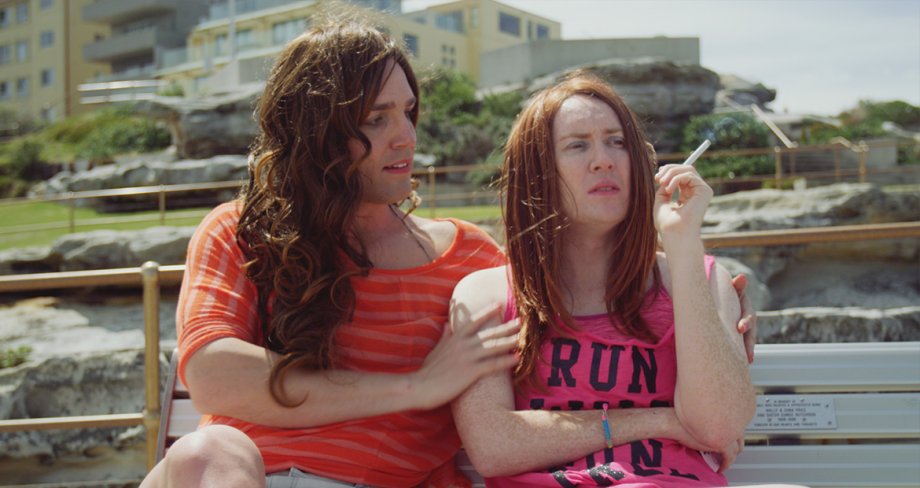 At the time of writing, anyone who watches the Tropfest 2014 finalist You Wanna Order Pizza on YouTube will find it titled under, no joke, “Tropefest 2014”. While it’s surely an innocent mistake by the event’s online team, it’s a fitting term that casts just as much an omen for the overall quality of the shorts as the torrential thunderstorms that plagued the Centennial Park event. Despite some genuine highlights, the type of identifiably “Tropfest” films has largely been preserved: spruced-up skits that challenge zero conventions and court controversy in the chummiest and clumsiest of ways.

The most attention-grabbing shorts in the line-up were those that steered away from contrived audacity. Chafing against the competition’s criteria is Millie Rose Heywood’s Spirit Stones, a family drama-cum-possession-mystery taking place across generations of an Aboriginal family. The lead actors ring authentic, and their suburban environments are gorgeously rendered by DOP Simon Morris, making for a promising, albeit hurriedly paced debut. Similar praise has to be given to David and Michael Karacic’s Untitled, a simple but effective one-take piece of an actor silently emoting to a narrated depressive spiral, which netted a Nikon DSLR-sponsored offshoot prize in a nice affirmation of technology servicing artistic expression. Better that than to give it to Liam Connor’s Inverse, which is technically stunning but has a plot so weakened through conceptual ambiguity that it becomes backgrounded by its own dazzling effects. A final strong contender is the sole documentary finalist, The Home Video, where Nhu Hoang Dang traces his family’s post-war return to Vietnam with startling formal and spiritual consciousness that outweighs its overt motions at sentimentality.

Most of the others in the slate are comedic, as in Tropfest tradition, and some succeed with a quick and formulaic approach. Winning short Granny Smith might be rooted in staid white-guy dilemmas (faking a sickie, contrasting Asian neighbours), but it’s charmingly shot and acted enough for its win to make sense. Michael Noonan also shows directorial nous with Evil Mexican Child by nicely parlaying its own racial othering into an amusing perversion of overt horror tropes; something of a Babadook by way of John Waters. I feel tempted to claim the hoary comedy-is-subjective clause regarding Toby Morris’ goofy A Lady & A Robot, for both the dare-gone-too-far feel of its Austen-tweaking premise and the mere sight of venerated Aussie actor Roy Billing nonplussedly shifting to let a man in an anachronistic cardboard robot costume move down the banquet table. Stuart Bowen’s Twisted is another pleasing and gimmicky effort via a premise of two men fighting over the same girl with balloon art, shamelessly mimicing the aesthetic of Scott Pilgrim Vs. The World along the way. And last of these is Gregory Erdstein and Alice Foulcher’s A Bit Rich, which reaches for socio-economic satire, and though it loses itself in churlish dialogue, it is the only film that even gestures towards mocking the tenets of extravagant upper class empowerment spectacles like Tropfest.1

Then there’s the blackened end of the spectrum, where the real rub of Tropfest makes itself very clear. As with past years, these shorts chase comedy and satire in an embarrassingly clumsy manner, seemingly written by people not normally in the business of doing so. Chief of these is the runner-up Red Nuts, which gives its blokey Irish protagonist two weeks to live and thus a blank cheque to live out squalid male fantasies (to the tune of RÜFÜS songs, for whatever reason). He relishes the opportunity to lay a former babysitting client and then to admonish the caricature that is his spiteful wife, basically making the whole thing into “Yeah, Fuck that Bitch”: The Movie. Shotgun Wedding feeds off much the same rancid energy but rubs salt in with a genuinely funny, wasted B-plot involving art robbers, before arriving at a boldfacedly childish ending that tests the limits of reading these works as irony. Other entrants like Fixed and Cavity peddle poor gags and stereotypes (did you know that swearing and kids are a winning combination? Because by God, you would have by the end of the coverage), but the worst of the lot is undoubtedly the rancid Little Bondi, which aims to localise the scandalous subversion of Little Britain but settles for dressing men in drag and actual brownface.

The tropes on display throughout these – shoehorned crude humour, twist endings, preponderance of existing industry talent – have been well documented, and it’s unlikely that the trend will change given the brand’s global reach. Tropfest will keep turning as sure as the reputations of the star faces emblazoned across its website’s media roll. In the meantime, those who dream of serving our country’s peculiarities back to us through film can do so in several diverse ways throughout the coming year.2 They call it “a cultural experience like no other”, but the time has well and truly come for it to be supplanted in the broader conversation.