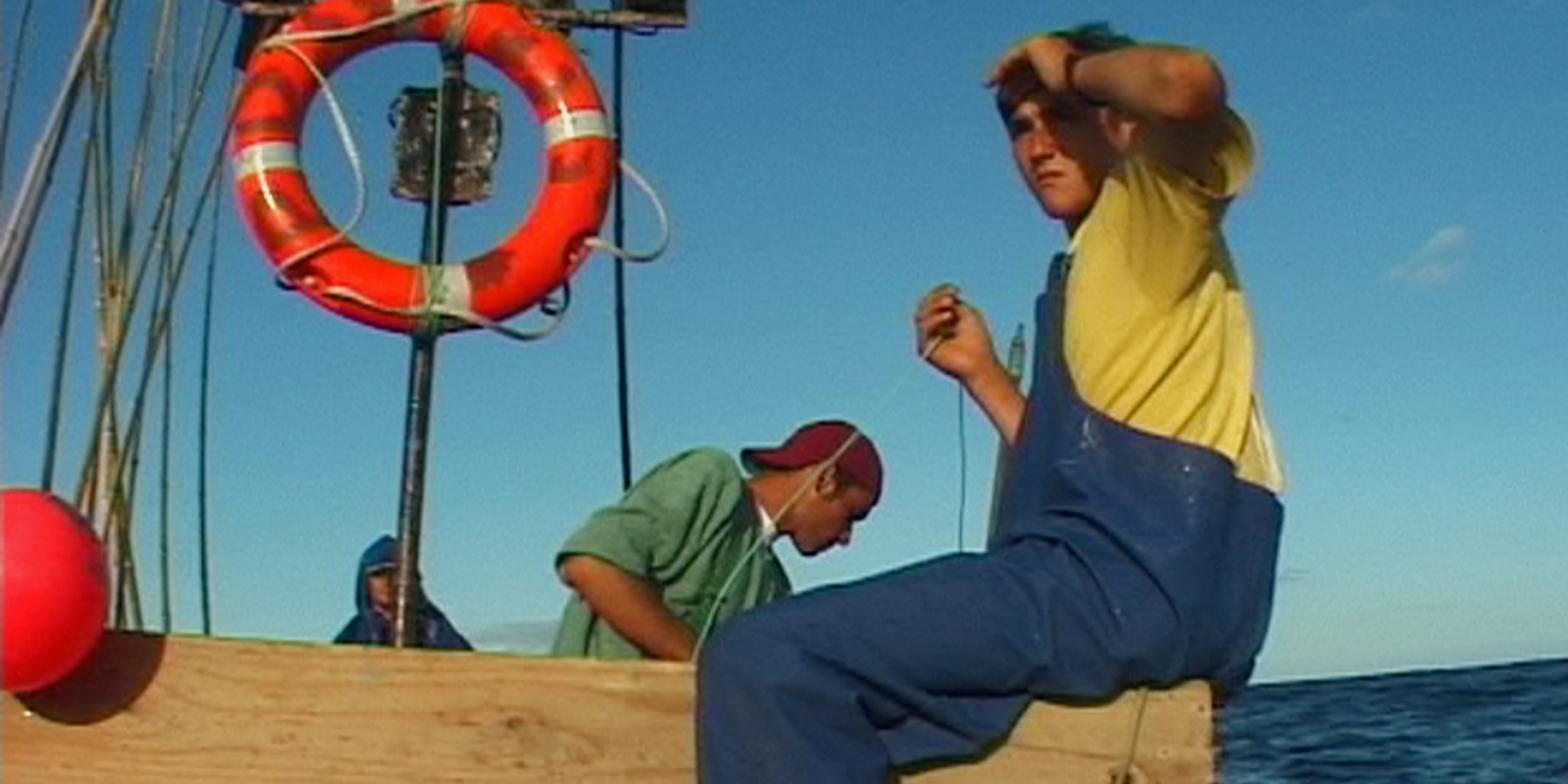 Fish Tail, the newest film from Joaquim Pinto, co-directed this time with his partner Nuno Leonel, has a peculiar production history that is the source of its strength as a work of personal documentary filmmaking. The film’s genesis lies in the pair’s travels to a fishing village on an island in the Azores named Rabo de Peixe (“fish tail” in Portuguese) in 1998. Struck by the fishermen’s non-industrial, small-scale approach to fishing that was becoming increasingly rare and threatened by enormous international fishing fleets, the filmmakers decided to stay on and make a film about the village, shooting from 1999-2002. The footage ended up in a documentary that was produced with the support of a Portuguese public broadcaster and fishing associations keen to produce a document on small-scale fishing practices. The result was a truncated 55-minute film that aired just once on Portuguese television, having been heavily censored and reworked by the broadcaster to create a somewhat idealised view of the village and the fishermen. Unsatisfied with the experience, the directors return to this footage in Fish Tail, making the film essentially a re-cut “designed to do justice to the bravery of the young men depicted and their struggle to maintain a cherished tradition.”1

In keeping with this statement of intention, much of Fish Tail is concerned with the labour of the fisherman themselves, recorded “in a specific point in space and time” as the closing voiceover puts it. More specifically, Pinto and Leonel are interested in the opposition that separates the small-scale, traditional methods of the fisherman of Rabo de Peixe with the heavily automated, industrialised technology threatening this way of working. The opposition is encapsulated in a quote we hear from French philosopher and political activist Simone Weil, arguing that the fisherman “has a more enviable lot than the manual worker on a production-line […] because his work resembles far more the work of a free man,” despite the daily dangers he faces in going out to sea. While this may sound like an overly romantic account of largely thankless and incredibly strenuous work, the quote is politically contextualised by the filmmakers’ trenchant criticism of exploitative global labour that encroaches on and flattens out the culture and work of small communities. Tellingly, the last piece of footage of the film is from January 1, 2002 – the day of the currency changeover in the Eurozone – showing the fishermen trying to work out the amount of euros to redistribute to each crew member.

Yet the film’s scope extends beyond this framework of labour in the small fishing village to include a more personal examination of the rapport between the filmmakers and the people that appear in their film. What Now? Remind Me2, Pinto’s most recent work as director, is a useful point of comparison in the way that it attempts to bridge the gap between historical phenomena and the subjectivity of the filmmaker. Essentially about Pinto’s experience dealing with his Hepatitis C/HIV co-infection, the film blended diary-like, hyper-personal filmmaking with more far-reaching reflections on the history of the HIV virus and life in the cinema. The filmmaker’s personal struggles were joined together with broader historical currents in a synthesis that was mostly successful, though meandering and probably too long.

Though it has received less attention and a milder reception than What Now?,3 Fish Tail is a more interesting piece of filmmaking, largely because of the way it balances this rapport between subject and filmmaker described above. The reason for this I believe lies in the film’s unique set-up as a work of reassemblage and recreation, which allows for the directors’ voice to emerge much more organically and with more subtlety than in What Now?. Working on the footage after so many years, the directors’ relationship to it is defined by temporal distance. It lends the film to reflection as well as exposition: there’s as much a sense of looking around a point in the the world through images as there is of looking back on a moment in history captured in images. Here, the relationship between sound (in the form of the directors’ voiceovers) and image is crucial, with the “old” images (shot using early video camera technologies) providing the grist for a “new”, contemplative and at time autocritical commentary. This sound/image relationship is reflexively alluded to in a moment early in the film when the directors are explaining the basics of filmmaking to one of the local fisherman, saying “you can match any sound and image together.” Though the commentary generally stays in the strict present tense – especially when describing the work of the fisherman – it liberally slips out of this and into more abstract ruminations on the people and the filmmakers’ relationship to them.

This abstracted contemplation produced by the conjunction of sound and image is the most interesting part of the film for me, particularly in the way that it allows the directors to negotiate their relationship with the fishing community as both outsiders and insiders. The emphasis of the film shifts between the fishing village and those who work there to the filmmaker-subject relationship itself. In creating this shifts, Leonel and Pinto attempt to break down some of the boundaries that often separate filmmaker and subject, particularly in the ethnographic film tradition. We see a concrete example of this early on in the film: Pinto hands over the camera to one of the fisherman, and it is his images – however clumsy and amateurish they may be – that we see for the next few minutes. While insisting on including the documentary subject in the creative process of the film has certainly been done in the past,4 for Pinto and Leonel it allows their film to reflect on and critique their encounter with the community.

In trying to give a just portrait of this encounter with the fisherman of the Azores, Pinto and Leonel speak more broadly to notions of authenticity and the cinema. Early in the film, when Pinto describes his work in (fiction) film to some of the fisherman, there is a moment of wry humour when he describes it as cinema “where people eat and don’t shit, or work but are never seen working.” More than setting up a facile “real” (documentary) / “fake” (fiction) dichotomy as a claim to authenticity, these statements feed into other autocritical reflections on their cinema in other parts of the film. Later in the film, when Leonel goes diving during a fishing expedition, we hear Pinto in voiceover talking about his partner’s decision not to film at that moment, to keep it for himself. Why film? Why keep some moments to oneself and share others? Pinto gives us one reason in voiceover at another point in the film, when he affirms that at the very least, shooting is bringing the pair closer together with the people of Rabo de Peixe.

Perhaps there is no more succinct a summary possible for what Pinto and Leonel aim (and succeed, by my reckoning) to do with Fish Tail: to bring themselves closer to the people whose images they captured over a decade ago. It is a sensitive and intelligent work from a pair who will hopefully continue in this vein of thought-provoking, contemplative documentary filmmaking in the future.