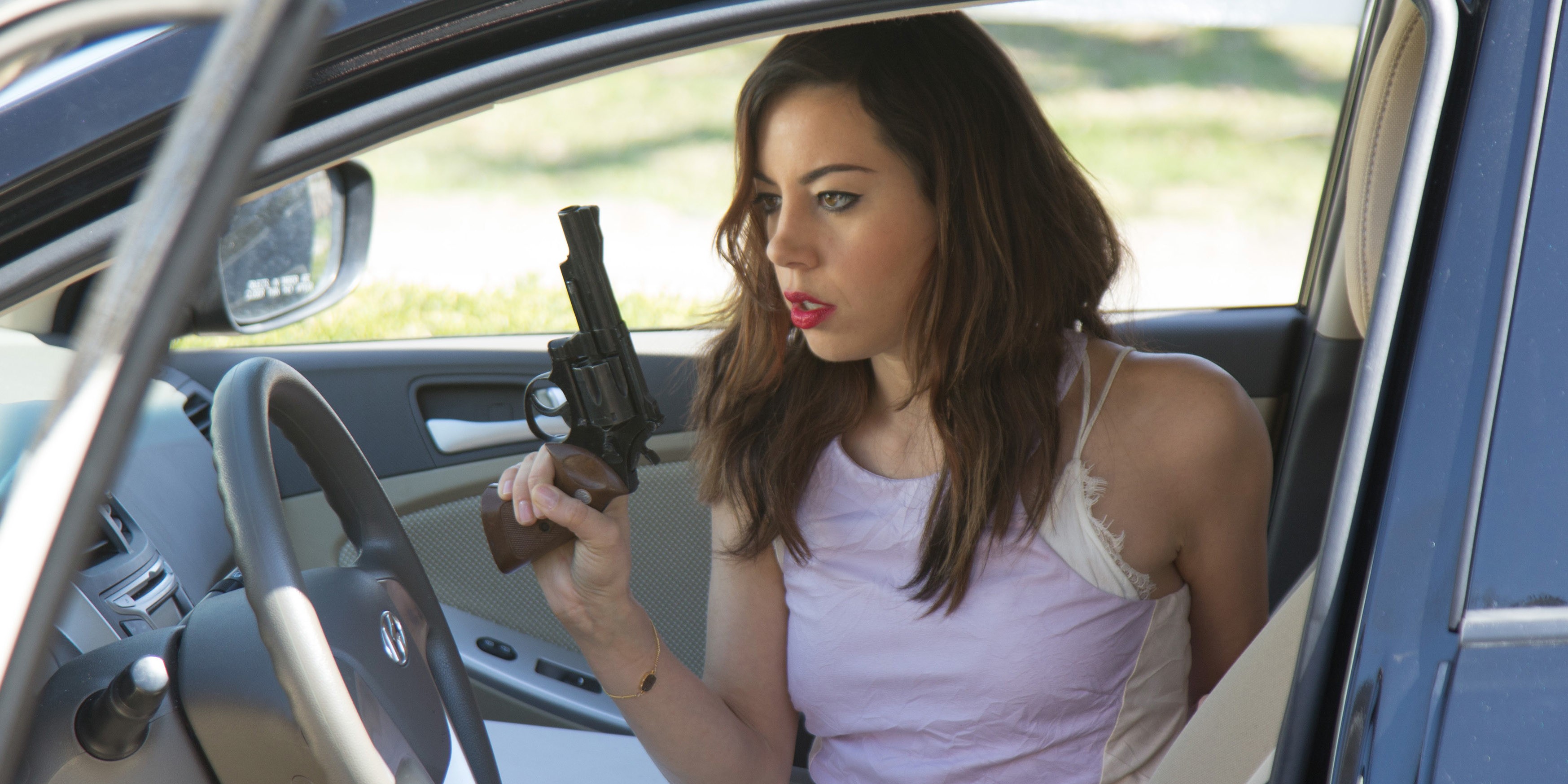 Hal Hartley has been careening across the American indie landscape for more than two decades now with little in the way of any forays into multiplex success or A-lister-slums-it blockbuster casting.1 Until now, perhaps, with Ned Rifle, the final part of a loose Hartley trilogy each named after a member of the central chaotic family – Henry Fool (1997), the father, Fay Grim (2006), the mother, and now Ned (christened Edward), their son. Should Ned Rifle enter the indie canon, it will be mainly due to the film’s superb acting and casting; the stock actors Hartley assembled over the course of his early features and Rifle’s prequels perform with the assured anti-naturalism that only a troupe of collective artists can manage, and are complemented by a potentially definitive performance from Parks & Rec nerd-candy and emerging mumblecore star Aubrey Plaza, as Ned’s persistent and off-centre companion Susan. The confidence with which the cast, and Hartley, pull off the film’s basic dissociative malaise elevate it from an arthouse niche interest to a must-see.

Framed, edited and acted in an identical manner, and measured perfectly in its few changes of tone and pace, Ned Rifle would function as a neophyte filmmaker’s handbook if the specific style it employs were not so abrasive. The first scenes establish Hartley’s formal mode, as Ned, in witness protection since the last film’s events landed his mother Fay (Parker Posey) in jail for life, contemplates leaving his pious adopted home on his eighteenth birthday, with only one interest: to kill his errant and lascivious father (Thomas Jay Ryan). Various characters – the reverend who heads the household, the church handyman, the teenage daughters infatuated with Ned – drift in and out of frame, discussing inanities with the same tone as the major plot points which follow. Hartley cuts neatly to the speaker in a conversation without fail, and never allows characters to speak over one another; the effect is an eerie, sterile atmosphere, purposefully non-naturalistic and totally distant.

While this stilted kind of delivery, especially paired with the awkward eccentricity of characters like Susan, Ned and Ned’s uncle Simon (James Urbaniak), another trilogy regular, threatens to evoke the feigned quirkiness of recent mainstream comedies, it’s rescued entirely by the cast’s sheer confidence. Hartley, too, knows how to ‘perform’ for his part, expertly pacing the sequences which deserve more serious or emotive moods – compared to, say, Napoleon Dynamite, there’s never a sense with Ned Rifle that the film is carried solely on the back of some kind of alt-appeal.

When it comes down to it, trendy Brechtianism and thoughtful camerawork can only carry any film so far, even in the artsy surrounds of the Berlinale. What makes Ned Rifle worth seeking out outside of convenient festival settings is much simpler: this film is absolutely hilarious. Not always laugh-out-loud, and not even always smirk-to-yourself (but sometimes both of those things), the film carries with it a wryness that’s impossible not to appreciate, and a lightness at odds with its crime and trauma-driven plot. The Hartley regulars conquer their own comic timing with seeming ease, particularly Urbaniak, whose po-faced delivery of Hartley’s infamous philosophical quotes is little short of perfect, and Ryan, as the insalubrious and self-defeating Fool.

The best comedy in the film, though, comes from Plaza, who slots into the ramshackle Hartley collective as if she had spent her career there. For a character so utterly messed up – her backstory covers several errant sexual and mental episodes – Susan is a compelling and endearing foil to Liam Aiken’s Ned, Plaza’s notorious deadpan style serving to both darken and lighten her character at the same time. Ned’s fascination with her is all the more believable thanks to her beguiling wit and bookworm weirdness – and so his transition from troubled Christian boy to vengeful loner, powered by the common threads linking he and Susan with Henry, takes the foreground in a narrative climax unexpected in its rawness. When all is said and done, Hal Hartley’s America is a place of inescapable Kafkaesque nuttiness – what Ned Rifle shows, though, is that he sees it also as a kind of haven. The good, the bad and the hopeless coexist, peacelessly but not without warmth, in a work somehow both continually witty and achingly sad.