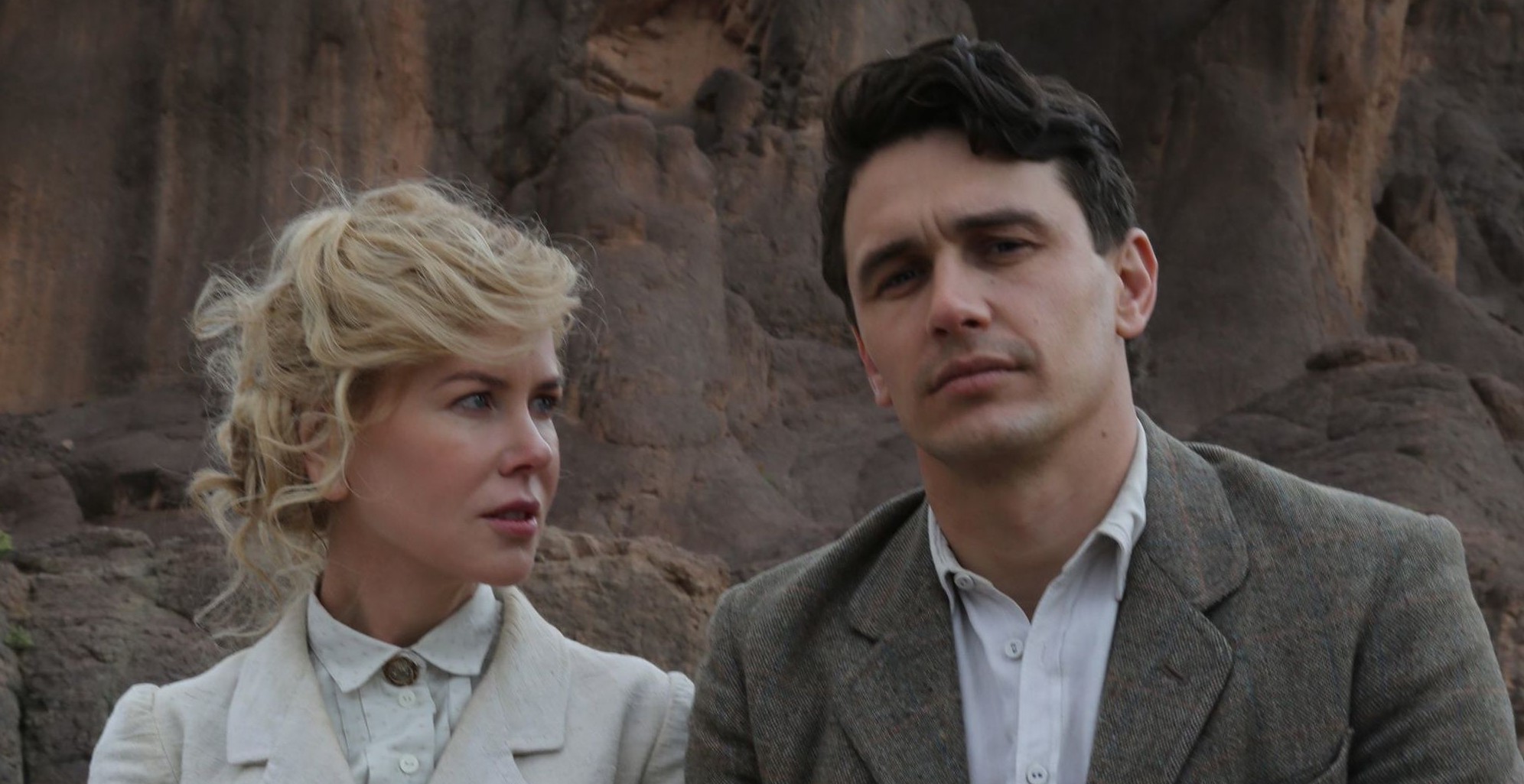 Werner Herzog’s Queen of the Desert is a deceptively straight but decidedly camp romantic epic, a closer cousin to its 1994 namesake Priscilla, Queen of the Desert than its seemingly earnest biographical premise may otherwise indicate. With Gertrude Bell (Nicole Kidman) as its core figure and master in command, it’s a playful, feminist inversion of the exclusively male world of Lawrence of Arabia that reveals its hand with coy side-glances. Burlesque gestures are scattered throughout the German auteur’s latest, with stunt casting, knowing dialogue and self-reflexive nods to Herzog’s previous filmography rearing their heads at unexpected intervals to disturb the flow of action and remind the audience that they are indeed still watching a Herzog film, if an anomalous, unexpected one.

Herzog establishes this mode of comedic disturbance from the outset of the film, the opening scene greeting us with a gentleman’s club of British military heavyweights deciding how they’ll divvy up the Ottoman Empire as if they’re playing a casual game of Risk, leaving the difficult countries like leftover scraps they’d rather let the French clean up. At the table is T.E. Lawrence (“of Arabia”), played by Robert Pattinson, whose every performance necessarily carries with it the unmistakable presence of his galactic, all-engulfing fame. We don’t see him until someone asks his opinion, where he’s suddenly revealed in a close-up. The audience laughed – they saw Robert Pattinson, not T.E. Lawrence. His performance, and that of his co-stars James Franco and Nicole Kidman, is one of playful self-awareness orchestrated by Herzog.1

James Franco is a living, breathing, ever-mutating meta-performance of a homo sapiens. James Franco plays himself. Like Pattinson, he’s the punchline of his own joke. Herzog embraces his freak show, installing him as a pawn in his chess game – a Klaus Kinski, a Nicolas Cage, a Timothy Treadwell. He appears as Henry Cadogan, the poetic, Tehran-stationed diplomat and gambler who steals Bell’s affections in a series of schmaltz-overlaid scenes, which recall equally camp sequences in Baz Luhrmann’s not dissimilar outback epic Australia of a exaggeratedly genteel Kidman reluctantly falling in love with an exaggeratedly roguish Hugh Jackman. Taking Bell to his favourite rock formation, he says to her: “I go when I get lonely,” adding, with his trademark squinty-eyed knowing glance, “I get very lonely.” Later, he leads her up to the Tower of Silence, where burial rituals take place of vultures feeding upon the flesh of the dead, and says he’d like to kiss her, a sole vulture looking on. It’s about as conspicuous a Herzog intervention as an iguana on a coffee table. (You can almost hear him say, “I see only the overwhelming indifference of nature.”) It’s hilarious, and it’s meant to be.

But why do I feel like I’m the only one laughing? Granted, it is a bizarre mode he’s operating in, an out-moded and unfashionably kitschy one, and it is often unclear exactly what Herzog is getting at. As a straight biography of Gertrude Bell, I can see how it may be unsatisfying to those who may expect a realistic, nuanced portrayal of an incredible woman in history, but in all seriousness who could expect Herzog to make such a film? Seen as a playful, comic, romantic epic, a burlesque inversion of Lawrence of Arabia, there is plenty of pleasure to be had in watching Queen of the Desert. Like an old Hollywood film that sweeps up its audience with a cascading score, graceful cinematography and romantic notions of adventure, but one which delivers its audience with a subversive side-helping of Brechtian distanciation.