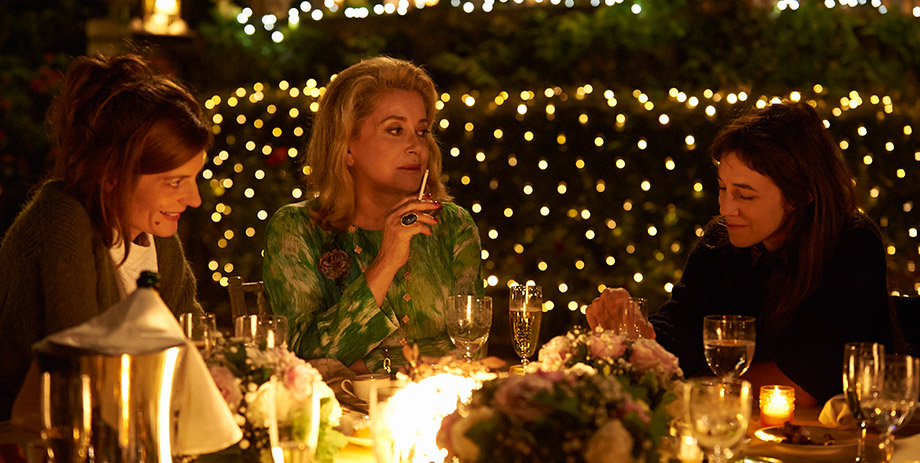 3 Hearts (3 Coeurs) embodies some of the potential pitfalls of the French film industry – overly serious drama, good actors in bad roles and what feels like production purely for production’s sake.

We meet our protagonist (Benoît Poelvoorde), a tax auditor who misses his train and is forced to stay the night in an unnamed French town (simply referred to by all as “the country”/ “la provence”). Killing time in a brasserie, he is drawn to a mysterious and beautiful woman buying cigarettes (Charlotte Gainsbourg). They spend the night together talking and feel a connection – they agree to meet in the Jardin des Tuileries near the fountain the following Friday at 6PM. The woman resolves to leave her partner, and heads to Paris to meet him – alas, frustrating clients and a coronary episode intervene and they do not meet. She heads back home to her partner and together they leave for Minneapolis for his work. Our protagonist returns to the country town to look for her and by chance in the tax office unwittingly meets her sister, Sophie (Chiara Mastroianni), with whom she ran an antique shop. We now find out our protagonist is Marc, who falls in love with Sophie and moves to the country town to be with her and marry her, with the approval of her mother (Catherine Deneuve). But he soon realises who Sophie’s sister in the United States is, and when she returns for the wedding they realise they still feel a deep attraction.

This is pretty standard romantic comedy or screwball fare – the missed connection, a life not lived, and a sort of ménage-à-trois. It is done, however with such a mind for seriousness that is impossible either to enjoy it, or to take it seriously. After a good half hour, a deep voiceover intones a grave narration seemingly out of nowhere, telling us that Marc is now happy in his life in the country – it returns twice at seemingly random intervals to provide dramatic commentary. These attempts to heighten or highlight the drama simply leave it looking poorer, so incapable of holding our attention that it needs to be spelled out.

The film features a deeply and almost inappropriately dramatic score – stirringly ominous strings that can be soon predicted as they intone and foreshadow the tragic fate of our three heroes. The music is so absurd it pulls you completely from the scene, rather than allowing you to appreciate organically what little tension might be arising.

The actors are all good but the performances are bad – Gainsbourg is a manic shell of a woman, her only characterisation being her role as Marc’s fantasy. Chiara Mastroianni is solid but useless as Sophie, serving as an object of pity rather than a narrative agent. Benoît Poelvoorde tries to draw Marc as sympathetically as possible, but he is done no favours by a script that expects us to sympathise with his very own Sophie’s choice without putting in any of the groundwork. Catherine Deneuve is simply scene dressing, given nothing to do and utterly wasted.

There is a strange subplot that follows Marc investigating the town’s Mayor for tax fraud that takes up far too much time in the plot and delivers little. Overall the pacing is ineffective, making the film feel overly long and, by the time the tragic love triangle is concluded, simply unsatisfying. Simply put, the film is inconsistent – the cinematography moves from standard framing to constantly moving, without necessarily reflecting the action or mode on screen. When constantly roving, it is frustrating and distancing; when placid and stable, it is utterly forgettable.

3 Hearts has been programmed as part of the Alliance Française Film Festival, and was presented in the context of a discussion about the French cinema industry. France imposes a tax on foreign films distributed and exhibited in France, the proceeds of which go towards funding French cinema. As such, France is able to produce an average of 250 films per year. With numbers like those, at least a few are bound to be misses, such as 3 Hearts. Despite high profile talent (particularly such iconic talent as Deneuve and Gainsbourg) and solid, well-funded production values, the film achieves little, and feels like it exists purely to be produced. We learn nothing about the three hearts in question and without much entertainment value to tide us over, there’s little to hold us as an audience.