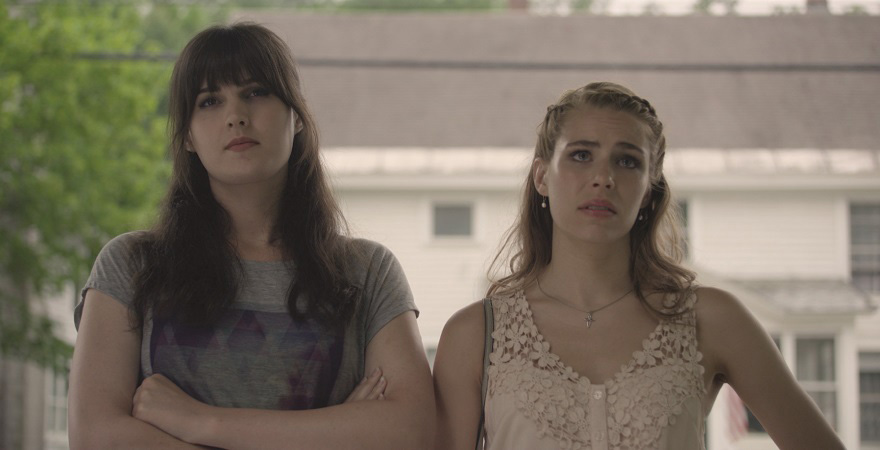 There’s a kind of contrived wit slathered across Boy Meets Girl‘s first few minutes, where transgender girl Ricky (Michelle Hendley) and lifelong friend Robby (Michael Welch) shoot verbal bullets over their dating lives. Frank-with-a-capital-F as their Kentucky-lilted dialogue is, its more serious intentions are made clear when military bride-to-be Francesca (Alexandra Turshen) walks into the small-town cafe and is instantly smitten with Ricky. What unfolds between the three and Francesca’s fiance David (Michael Galante) is ostensibly a light drama on sexual fluidity and political transphobia. Unfortunately, it’s too mired in goofy melodrama and shonky execution to be as poignant as it evidently wants to be.

Writer-director Eric Schaeffer opts for a simple approach visually, with his editor Frank Reynolds (Tromeo and Juliet) cutting fast-paced conversations in a conventional manner. It lends simple and effective intimacy to moments that require it, despite the occasional awkward cutaway. Their major save, however, is Hendley, who emits an easy charisma at all times, whether she’s trading barbs with Welch or having a tender moment with Turshen. Those one-on-one scenes in particular, thanks also to occasionally handheld cinematography by Violetta D’Agata and Andrew Ravani, come to be a welcome respite from the hollow attempts at gravitas surrounding them. Many of those dwell on the subject of her absent mother, and tend to feature both her younger brother (Joseph Ricci) and single father (Randall Newsome) to strangely little gain beyond a cute exchange or pep talk. The lowlight of this heavy-handed streak is a party scene that feels haphazard from the get-go – it looks like a busload of twenty extras failed to make it to set on time, and that not enough time was spent blocking out the frame – and then sinks into gonging political jabs. Amid all of that is poor Galante, saddled with a character who spouts cartoonish transphobia. The later justification for this is wrapped in a belief-suspending plot turn that detracts from the ingenue’s anchoring performance.

As the film finds other camp-inflected situations, the possibility emerges for it to be enjoyed somewhat ironically. One scene has Elizabeth Ward Land diving headfirst into a wildly arch, Cruella de Vil-evoking turn, making us doubt whether she knows what kind of movie she’s in. The opening exchange between Ricky and Robby also employs sepia-toned flashbacks with a quirky sense of humour that feels borrowed from another film, and a later exchange has the two discuss the fallacies of certain labels for sexual activity. Those touches might have fostered a bawdy and irreverent tone, but it’s clear at other times that it isn’t really what Schaeffer is aiming for. He’s more interested in something contemporary and engaging, giving Ricky her own Youtube fashion show to show off her clothing designs, which is another showcase of Hendley and Turshen’s easy charms. One particular video of Ricky silently holding up cardboard signs as a high school student is intended as a poignant bookend but only flimsily lend the impression of meaning that hasn’t been earned, especially given the hilarious falsity of the resolution. It gives the impression of an identity crisis, where Schaeffer is unable to marshall these tonal variations and make even one of the digressions stick the landing.

The tonal flip-flopping might have at least made for an amusing film, but what sours it beyond even that level is the wishy-washy message contained in both the video blog and a key confrontation in the second half. Most will probably guess how certain plotlines will be resolved by the end, particularly Ricky and Robby’s friendship, but the way in which it does this is highly questionable. It starts out awkwardly with an overdone performance by Welch, which starts well but descends into shouting hysteria, and then becomes problematic in how it portrays his character’s difficulty with embracing sex-positive attitudes. Trying to find commonalities among people of different sexual and gender identities is admirable, but in the process straight allies’ discomfort is given as much value as the oppression felt by those outside of heteronormative identities, which comes across like a shallow bid for a wider audience.1 Boy Meets Girl can have all the hammy dialogue it wants, but by generalising its outlook this way, it takes the sting out of its tail.