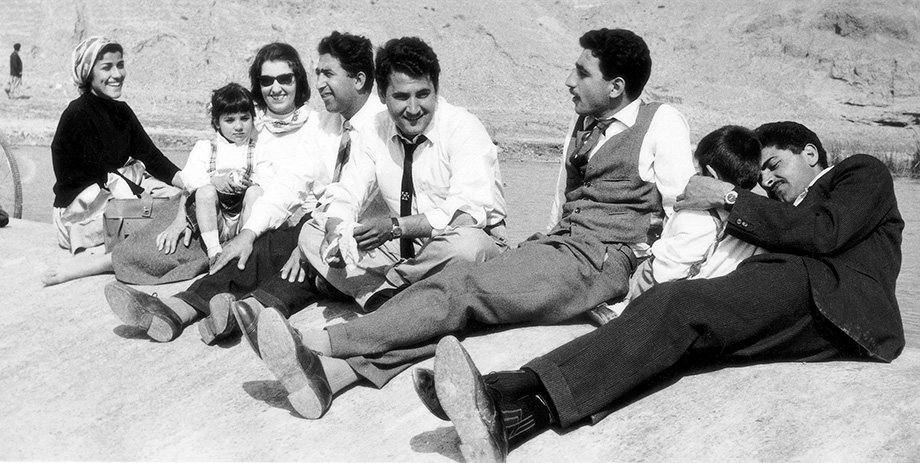 It’s not exactly uncommon for a human being to want to know where they come from; to feel some kind of an imperative to understand their place in the world. I’d go as far as to argue that in the case of the migrant experience, the desire can be even more palpable – as the aforementioned point of origin is split, infinitesimally over time. In my own experience whenever I’ve perused through family history, merely glimpsing at the surface of it all I’ve been drawn to how expansive it really is; how much it beckons to be dissected, examined and rebuilt into something coherent. I’ve always found my mind navigating possible forms for doing this and the idea of film is never far from it. The thing is, I’m sure this is a very universal experience to have – especially amongst people who have a history tied to a country that isn’t the one their family has chosen to live. In Samir’s Iraqi Odyssey this examination takes place.

At face value Samir’s film is about Iraqi diaspora. Then again, four, maybe five million Iraqis live outside of the country, so why Samir? This is a question answered in his execution. His film is both explicitly personal, but markedly universal at the same time. It’s a largely multifaceted piece where many aspects of the experience portrayed could be interchanged with another diasporadic people – where a certain family member is living, what drew them to that place, the eternal question of how different a life would have been led if such a migration never happened. On the other hand, there are others more specific to Iraqi diaspora – the figure of Saddam Hussein, Iraq in the present day, and the experiences as Iraqis abroad felt by the characters within the documentary. Then, there’s a final level: Samir’s. More precisely, under every layer of the documentary is Samir’s – his relationships, his family, his history – that we are granted the most intimate access with. This is, then, a work that is capable of telling both an intimately personal tale against a historical and political backdrop whilst examining the careful and intricate relationship between both sides.

It betrays the narrative of a vast majority of the documentary to simply retell the stories that are given screen time throughout Iraqi Odyssey, but background is important in understanding the breadth and depth of Samir’s piece. Samir has been based in Switzerland most of his adult life, but the rest of his family – like most migrant families several generations into their diaspora – is scattered from as far as Australia, New Zealand, America, the UK and even Russia. Suffice to say, most of Samir’s extended family don’t live in Iraq anymore, and like his their stories are less tied wholly to the country itself and more to the intersection between it and their place of migration.

At the opening of the film, Samir makes it clear that it would be impossible for him to cover every story in his extended family as the camera pans out over a fairly impressively sized family tree. Slowly, a few pictures on the tree are highlighted and its made clear that these are to be the focus on the documentary. There’s an element of tragedy that frames Samir’s history – and its one that isn’t shared by all migrant experiences; its largely personal, and on a national level, sure it has similarities, but its pain is starkly unique; while Samir’s expression of it ranges from wholly sincere to absolutely poignant. Samir’s documentary is both historical and personal and this is all played out over the three sections that make up the ‘odyssey’. Firstly, Samir looks at his grandfather, a man who fought against the British and remains one of the directors heroes. After this it becomes more personal as the director examines the waves of emigration that he exists within, stemming from the 1960s and 1970s. There’s a political side to all of this the frames the latter half of the film: Samir’s emigration, the second section, stems from the time that brought upon Saddam Hussein’s three-decade reign over Iraq – while the final act, the third, emerges from Hussein’s downfall. In this period of over fifty years, Samir shows an entire history displaced and affected in ways that – without the presence of such a film – would be almost unimaginable. It’s difficult to describe, but Iraqi Odyssey does an incredible job at doing so.