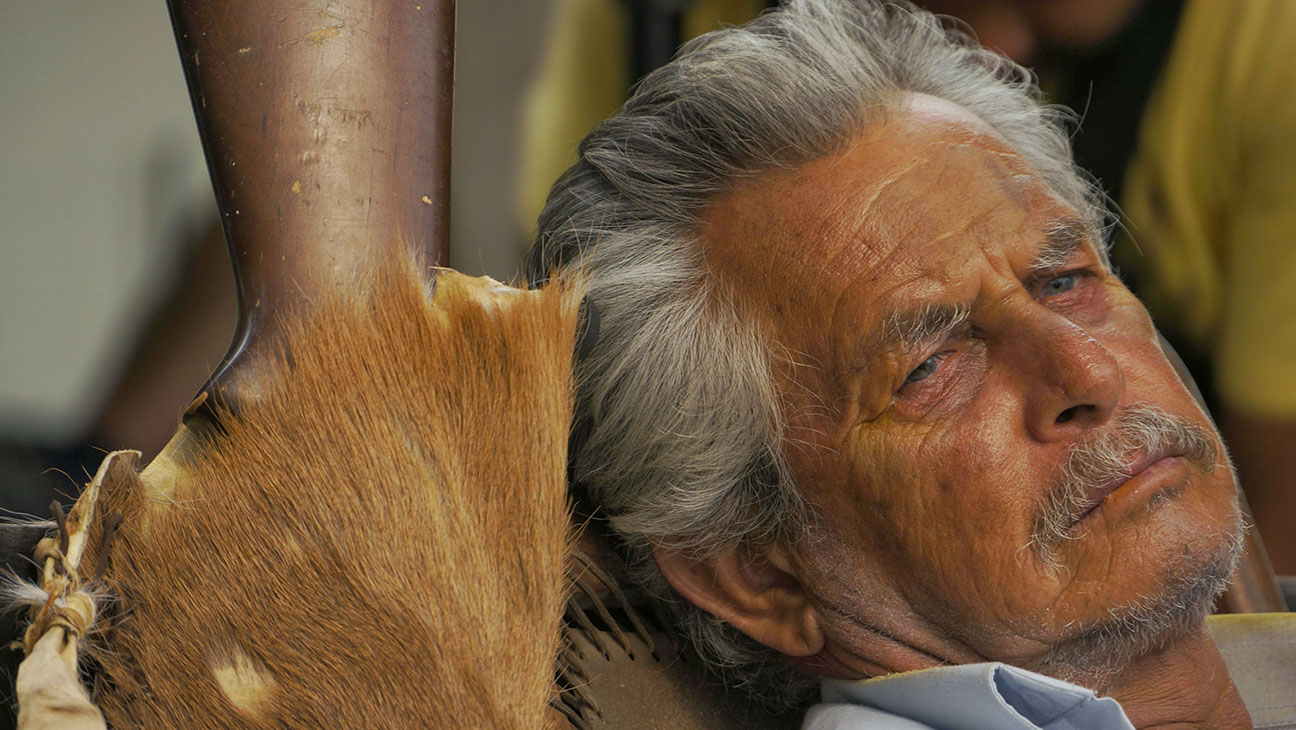 Silvio Vega, the central character of Colombian director Ruben Mendoza’s second film Dust on the Tongue, is a force of nature, the kind of mercurial yet terrifying figure out of vogue in modern world cinema. Amid recent festivals’ emphasis on the power of film to allegorise political situations or to explore the intimacies at the heart of the (global) family, there aren’t many Silvios. An aging landowner in the vast, ranging llanos of Colombia’s interior, he represents the machismo, prejudice, and utter magnetism of the third world patriarch. Mendoza’s film, centred on Silvio (Jairo Salcedo) and his adult grandchildren as they use and abuse one another in his final weeks of life, is raw in its depiction of both the brutality and the communitarianism of the terrain it features. Never overwrought but frequently rough-shod, and carried almost wholly by its mesmerising main character, Dust on the Tongue marks a key development for Mendoza, a filmmaker with the potential to join the ranks of enraged, poetic South American cinema memorialists.

It really is memory, or the memory of family, or the memory of a country, that underpins the film. It begins with a grainy film reel slideshow – we later learn that the young man asking questions of the old lady in narration is Fernando (Gabriel Mejia), the grandson who travels with his cousin Lucia (Alma Rodriguez) to “Don” Silvio’s sprawling ranch, and that the woman is Silvio’s wife, dead when the narrative takes place. In these home movies, Silvio is a shadow or a checked vaquero shirt, and the idyllic image and mystery this creates are at sharp odds with the immediacy and brutality with which his wife depicts him. Once, she tells Fernando, his uncle, Silvio’s son, wet the bed. So terrified by his father’s furious reaction, he tied a string round his penis, hurt himself, and had to go to hospital. Despite fearing him and his physical attacks, she talks of him with a twisted fondness. Later in the film, as we see a now-weak, pudgy Silvio struggle to mount a horse, she resurfaces on the soundtrack – “nothing ever tamed your grandfather”, she tells Fernando, from beyond the grave.

Once we meet Silvio, it’s clear that ‘tamed’ is the right word. Crotchety in a way that’s less curmudgeonly and more misanthropic, openly disdainful of women and homosexuals, and ashamed of his city-kid grandchildren, his cruelness is offset by an animalistic bent which places him at the heart of his environment. Mendoza’s camera matches the old man’s weathered skin and rugged demeanour to the striking gorges and plains, usually centring him in the frame, and places Fernando and Lucia wholly at odds with their family land, in t-shirts and yoga pants which speak of urbanity but also detachment. Fernando, after learning that his grandfather is dying, and wants to be euthanised by Fernando and Lucia – an honourable thing, to be killed by your own blood – can do little but sit outside with his cheap guitar and play a shitty cover of Stairway to Heaven. When they find a dead, rotting goat on the farm, there’s a comical smash-cut to Fernando staring at it gormlessly, the same guitar slung over his shoulder. Moments such as these are subtle, but see Mendoza, himself a child of rural Colombia, hinting at reason in the hatefulness of men like Silvio. Long, slow scenes that dominate the second half of the film expound this idea further: understanding how things used to be is important in knowing how they are now, and the anachronistic aggression of men like Silvio can tell the story of a nation more than Lucia’s vegetarianism can. As the film goes on, it focuses on naturally lit dawn and dusk scenes, and allows the environment to subsume the narrative more and more. Rather than foreigners curiously observing a harsh world, we become insiders in the witching hour of rural tradition.

By its end, Dust on the Tongue feels considerably heavier than its slight 88 minutes. Some of its later images are indelible – Silvio calmly lumbering off his running tractor and plunging it into a still dam acts as a perfect expression of his loss of interest in his material wealth in favour of spiritual ascension. There are some shortcomings, particularly the total lack of characterisation of the two grandchildren – beyond Fernando and Lucia’s names and the vague implication that they’re arty types, we know little about them. Intended presumably to leave them as ciphers for the viewer, it has the effect of dulling the overarching narrative line of their return to the farm to scatter their grandmother’s ashes. A weird intrusion of the drug-addicted family doctor into the story seems to serve as a too-easy setup for the final scenes, too. These are minor issues in a confronting and abrasive work, though. Mendoza’s measurement of pace and lighting are stunning, and Salcedo’s performance rambunctious and brilliant. Maybe the deal Silvio offers Fernando and Lucia was not the arrogant, indulgent last wish of a tyrant, we’re left to wonder. Maybe for all his unforgivable faults, he has something to offer or to teach. His family, like so many real families, don’t seem to agree.