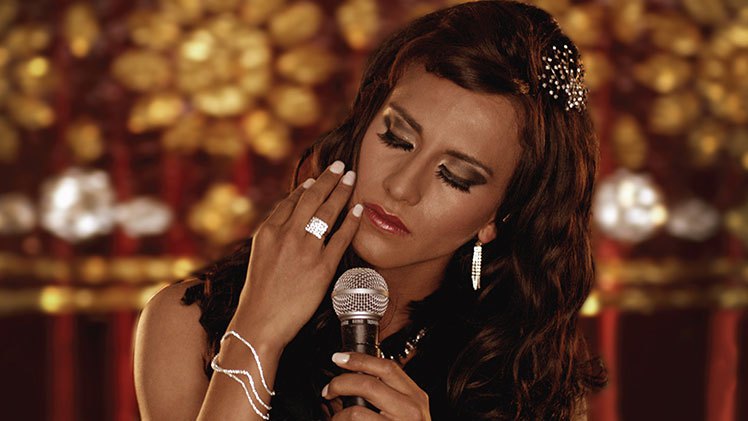 Carmin Tropical is a Mexican neo-noir rendering of transmisogynistic intimate partner violence that burns slowly, simmering with tension throughout. Writer-director Rigoberto Perezcano masterfully utilises the genre of glamour, sex and danger to discuss the fetishisation and threat that transfeminine communities face. The film adds beautifully to the ever-increasing canon of post-coming out cinema wherein we meet characters whose journey to self-acceptance is behind them, while the risk of external oppression remains ever-present. Carmin Tropical is not a story of transness itself, but rather the very painful dimension of the trans experience of attacks from the outside.

The film follows Mable (José Pecina), a young woman, textile worker and former performer who returns to her hometown of Juchitan following the murder of her estranged best friend, fellow transwoman Daniela. Haunted by her memories of Daniela and her former life in Juchitan, Mable searches for closure; visiting the desolate beach where Daniela’s body was discovered, the hardboiled detective working on the case and the glittery gay bar where they worked together. Existing in the fallout of Daniela’s death, the film wanders with anxiety. Two sequences reoccur throughout the film that subtly suggest a linking of Daniela and Mable’s fates. The first – a fragmented memory Mable has of a night out with Daniela – is comprised of choppy, unresolved glimpses of the two girls all dolled up together, shot in soft focus close-ups with warm lighting. Conversely, the second sequence – a long tracking shot in true noir style – shows Mable from behind as she walks in isolation down a hallway. This sequence, which suggests the point of view of someone following her, is cold and desaturated and occurs once more in real time at the film’s denouement. Operating together these repeated sequences imply the strong connection between the women, both in terms of sisterhood and their sharing of the collective fears many transwoman have of violence.

Perezcano’s auspicious selection of Juchitan as the setting for the film speaks to perceptions of the town, known for its high population of transfeminine folks, as a sanctuary of greater tolerance. Located within the southern Mexican region of Oaxaca, the film uses the phrase ‘muxe’ throughout, reflecting the concept specific to the Zapotec culture of the area that is interchangeably used for transwomen and third gender identities. By situating the story of cissexism and discrimination within a culture that has historically accepted gender variance, Perezcano is able to make a comment on the power colonialism has in shifting traditional values.

Much of the film is revealed in photographs, a motif which is established in film’s opening still images of Daniela. These home-style photographs flash on screen, showing a child assigned male at birth, surrounded by a loving and supportive family, as they gradually age into a smiling feminine adult. A final photograph shows a close-up of her face in profile, unconscious with tape around her mouth. This image is the most confronting instance of violence we see in the film, as Perezcano uses restraint to discuss society’s voyeuristic fixation on violence against women without revelling in it. Refusing the audience any bloodlust, the film lives in a world of implications, evoking a ‘what if’ concept of fear right to the film’s ambiguous end.

Following the initial series of photographs, we are introduced to Mable via the violent sounds of machinery at her textile factory workplace. The sounds are amplified and ferocious, and contribute to the film’s overall soundscape of exaggerated harshness. This reoccurs with frantic sound of ceiling fans speeding up, heels slapping on road and car engines revving menacingly. This soundscape develops to create a hostile environment in the film, which can be read as a metaphor for the trans experience of moving through a cissexist world, and develops the film’s drawn-out tone of agitation. Visually, the film stays true to the noir genre, with strong use of chiaroscuro lighting. This works to gorgeous effect, most memorably when we meet Mable in the detective’s office with a classic sliver of the light illuminating the side of her face. Using high-contrast lighting yet with a rich bright colour palette, a visual is produced that is at once striking and sickly.

The film’s most lush visuals lie in the penultimate scene where Mable performs at the bar where she and Daniela once worked. Dressed to the nines and spot-lit in front of a sparkling set, she sings a melancholy song of lost trust and love, an eerie final foreshadowing before she leaves with Daniela’s killer, doe-eyed and blissfully unaware. This sequence’s placement right before the film’s revealing end works to both encapsulate and deflate perceptions of transwomen as purely glamorous entertainers. Perezcano finishes the film with these images of a transwoman as fantasy incarnate, images which are immediately supplanted by a reality of violence. With this he sends a strong message to cisgender audiences about the dangerous ideas projected onto racialized transfeminine bodies. Carmin Tropical proves to be a brilliant melding of genre with a wider social issue, thriving as a film that gets under your skin and crawls around long after you have left the cinema.