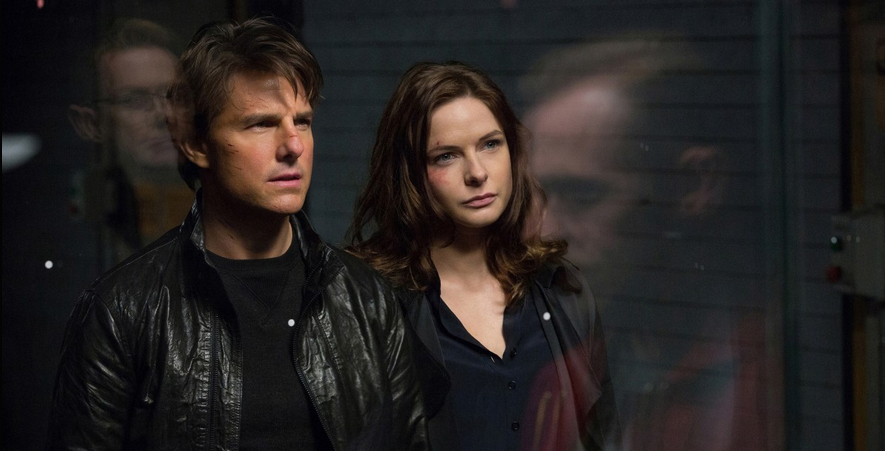 Rogue Nation pits Hunt and his band of merry men – Jeremy Renner’s William Brandt, now the head of the organisation, Simon Pegg’s Benji and Ving Rhames Luther Stickell – against “The Syndicate”, a mysterious criminal organisation Hunt has been tracking for months, while dealing with internal forces that would shut them down.

The films trade in a language of high-stakes missions, villainous schemes and absurd gadgets. The missions really do self-destruct in five seconds, and the plot regularly has to twist itself into strange contortions to justify its own machinations. In the hands of McQuarrie, however, the film becomes something that manages to play both sides of the coin – an awareness of its own absurdity while still delivering on those beats. There’s something to be said about making a genre and franchise film for the reference culture that makes up much of today’s cultural discourse. Between forums such as reddit, Tumblr, Twitter and more, current audiences can tend towards over-saturation and world weariness with tropes.

In return, McQuarrie offers an Impossible Missions Force wrenched into the present and subjected to a bureaucracy that voices the concerns of believability that an audience might have. How has a government body operated with so little oversight for so long? Jeremy Renner’s William Brandt is taken to task by an inquiry for the wanton destruction of the last film, Brad Bird’s Ghost Protocol, while Alec Baldwin in full Jack Donaghy mode as the head of the CIA, Alan Hunley, absorbs the IMF into his own ranks. Our heroes not only have to deal with a seemingly unstoppable international criminal syndicate, but also quite a lot of red tape. One scene sees Simon Pegg’s Benji whisked across the world for a mission only to sit in the store room on his computer. The work is simultaneously high stakes and banal, creating a pleasing balance between the thrills and the reality that modern audiences demand of the genre.

Cruise is surprisingly key to this balance, if only for the seriousness with which he undertakes the role. McQuarrie has injected a great deal of lightness into the repartee between the characters, particularly in an opening scene that sees Cruise clinging to the side of aeroplane while Benji bungles the tech trying to let him in. As Pegg, Rhames and Renner banter back and forth, Cruise is deadpan and set on his task. It is well known that Cruise performs all of his own stunts for the films, but perhaps more impressive than this is the seriousness with which he does so. Whatever you may think of him as an actor, a person, a public figure, he works hard to sell you on the stakes of the situation.

The treatment of women in Mission: Impossible films, and the action genre at large, has always been a problem. The series has seen some pretty dire female representation, from Thandie Newton’s helplessly objectified Nyah in John Woo’s Mission: Impossible II to Michelle Monaghan’s thoroughly fridgid Jules in JJ Abrams’ Mission: Impossible III. Even Brad Bird’s Ghost Protocol, a reasonably intelligent and entertaining addition to the series, saw Paula Patton’s Jane reduced to a girl-fight with Lea Seydoux over the death of one of her male agents.

Rogue Nation offers us Rebecca Ferguson’s appropriately named Ilsa Faust, a complicated double agent whose loyalties become increasingly murky as the film goes on. Faust genuinely kicks ass, and in a refreshing reversal, is called upon to save Hunt after he gets himself in over his head in an act of male hubris, attempting to live up to his own reputation. In spite of this, she’s nevertheless subjected to the genre’s male gaze, depicted in a slinky dress, backlit with bare thighs on display. It’s particularly disappointing that such an interesting female character is reduced to her body in this moment – we were going so well. It is to the film’s credit that little sexual tension is shoe-horned into the film, and no romantic conclusion is offered.

Sean Harris provides a quietly threatening villain as Lane, the head of The Syndicate, while Simon McBurney is suitably stuffy if overly British as Atlee, the head of MI6. Tom Hollander makes a welcome appearance as the British Prime Minister.

McQuarrie displays a deft hand as a director, with the script from McQuarrie and Pearce demonstrating a surprising depth. One of the first impossible missions centres around a production of Puccini’s Turandot, in which Turandot’s suitor will die if she guesses his name by midnight, resulting in the famous and familiar aria, “Nessun Dorma”, or “Nobody Sleeps”. Faust also presents a mysterious figure of unknown identity, moving between shadowy organisations in search of her own survival. Joe Kraemer’s score weaves in motifs from Puccini’s opera in key moments for Faust’s character, drawing interesting parallels between her and the iconic riddling princess.

Mission: Impossible – Rogue Nation makes a strong case as one of the best additions to the franchise, and shows an awareness of its changing context and audience that lends itself to a better constructed film. There remain issues, primarily in the female character (and Faust really is the only female character), but the overall result is a surprisingly complex film that offers a wry wink at the genre’s more ridiculous tropes, while still delivering on its promise.