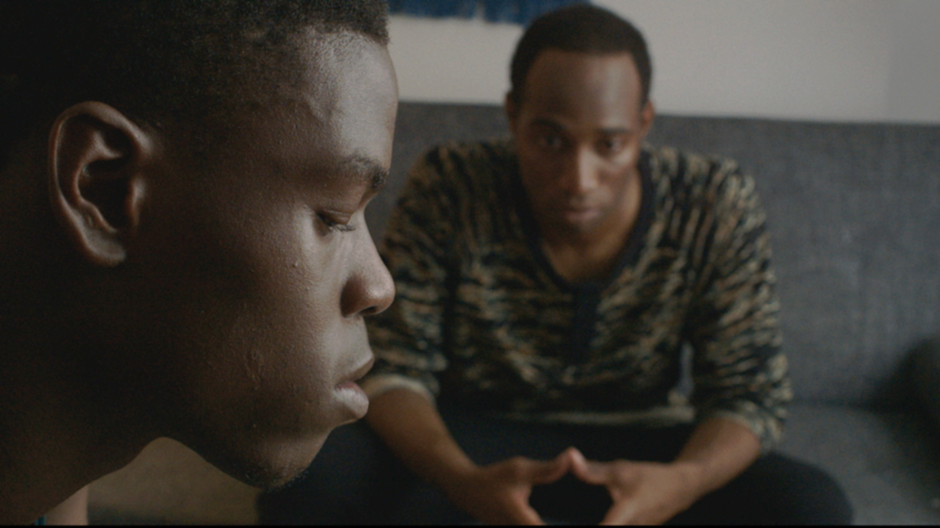 Jay Dockendorf’s Naz & Maalik is a debut feature that refuses to be categorised neatly. Outwardly, its premise is unusual, but clear and distinct: the furtive behaviour of two gay, black, Muslim teenagers in Brooklyn attracts the attention of an FBI agent. Beyond this, the film becomes much more complex. The threat of surveillance – internally and externally – punctuates a carefree, stream-of-consciousness style, in rigid, plot-driven scenes. Elements of black comedy are peppered here and there, hinting of the absurd but never realized fully. It’s a film ruled by its ambitious tonal and emotional shifts, creating moments of authenticity only to occasionally return to a forgotten plot.

Naz and Maalik trawl the streets of Brooklyn after school, hawking corner-store paraphernalia for some fast cash and contemplating the meaning of life. Sporadically, they duck behind corners and down alleyways to steal intimate moments together. They are best friends, but also clearly much more. When an undercover NYPD officer attempts to sell them a gun on the street, impetuous Maalik plays along as a joke – only to brush the scruffy stranger off at the last moment. Laughing, he takes off with a stunned Naz in tow. It kicks off the film’s ostensible main plotline: the NYPD officer reports back to an FBI agent assigned to their neighbourhood. Unbeknownst to them, the FBI agent decides to tail them in pursuit of further suspicious activity. It’s the almost absurd set-up for an exploration of the difficulty of their circumstances, and the fear of surveillance that pervades their lives.

The film’s pace is dynamic, but essentially boils down to a binary between fluid, frenetic scenes on the streets, and quieter moments of pause. Out in Brooklyn, the two flirt, debate with each other heatedly, play pranks. The observational style is a kind of Linklater throwback, recalling the open and vulnerable manner of characters engaging with each other emotionally. Here, they’re best friends, they’re boyfriends (if not overtly), and they’re free. Cinematographer Jake Magee’s guerrilla, handheld shooting style is as free as they are, following their exploits across the sidewalks, through parks and into shops without missing a beat. The camera sweeps around them, peers through the same holes into construction sites as them. Brooklyn’s vibrant energy and the anonymity of the streets captured effectively. These moments are so effective – only occasionally marred by faint dialogue mixing – that the film’s FBI agent plotline is transformed into an afterthought.

In fact, this is also the way that Dockendorf approaches it. The odd shot of FBI agent Sarah Mickell in pursuit is placed here and there, only given its due by Naz’s vocal concern of them being followed. It’s only a fair way into the film that they’re confronted by Mickell, and the dialogue that ensues is far more stilted than their own effortless and genuine rapport. Nothing much comes of this confrontation either, despite the presumption that the film’s events are meant to culminate in such a showdown. Even though this is a disappointing anticlimax, we almost don’t need to see more of it. Instead, what proves far more effective is the way the film imbues its scenes with an unspoken tension. This is never quite resolved, but its presence is unsettling enough. Extreme high angles observe the protagonists from afar and zoom in as they walk across the street – a vantage point belonging to no one thing in particular, but also every figure or symbol of authority in their lives. The FBI agent plotline spells out the greater fears of being caught out and judged for their love of each other – by Allah, by religious friends and family, by society at large.

The movie’s pace and tonal shifts, between free-flowing scenes and more somber ones, emulate the dynamic between Naz and Maalik themselves. Maalik is emboldened by any and every situation they come across, Naz more restrained and reserved. It’s a deft move on Dockendorf’s part to echo this relationship in the emotional subtext of the film’s scenes, because ultimately the film centres on the constant back-and-forth of their relationship. The scenes themselves revert from carefree to fraught with tension, and back again (despite the ubiquitous pressure throughout). At one point, when the two begin to kiss in Maalik’s room, Naz stops them from going further. The weight of his religious belief is clear, prevailing over other emotions. Throughout, this kind of tug-of-war between different influences, feelings, and values becomes increasingly apparent. This dynamic partly owes to the authenticity and power of the performances of its leads, Kerwin Johnson Jr. (Naz) and Curtiss Cook Jr. (Maalik). The two not only live and breathe the Brooklyn vibe of their surroundings, but also carefully capture and craft their scenes around an utterly truthful rendition of paradoxical teenage emotion: audacity and laughter, competing with anxiety and uncertainty. As such, they bring the nuance necessary to navigate and embody characters whose identities are so complex and intersectional. By contrast, it’s easy to see how the occasional return to scenes with FBI agent Sarah Mickell are far more clumsily executed and, subsequently, largely irrelevant.

In the end, the premise of Naz & Maalik is more intriguing on paper than in celluloid reality. What compels us to continue watching is the need to witness Naz and Maalik’s relationship, of being privy to every minute detail and shared glance up until it all falls apart at the film’s conclusion. Dockendorf’s debut is indisputably successful, despite the dead weight of its half-forgotten plot arc.