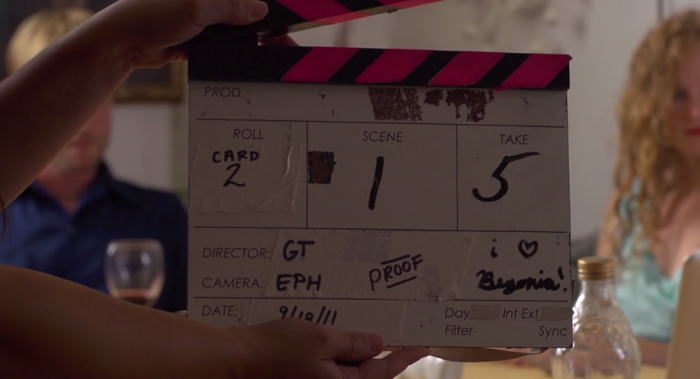 Ostensibly a document of a small film crew’s re-creation of a scene from Michael Curtiz’s little-known pre-Code drama Cabin in the Cotton (1932),1 Gina Telaroli’s Here’s to the Future! belongs to a long tradition of self-reflexive cinema focused on the mechanics, frustrations and joys of the film making process. Using footage shot by multiple members of cast and crew, who were instructed to bring recording devices of their own choosing on the day, the film charts the development of the group’s work on the sequence from Cabin in the Cotton as well as moments of repose and reflection as it unfolds over the course of an afternoon. In its blending of sequences of fiction with long passages of non-fictional material, as well as its autocritical focus on rehearsal and acting, it most strongly recalls the radical experiments of Jacques Rivette in Amour Fou (1969) and Out 1 (1971), replacing its central, fictional theatrical text with a cinematic one. In its often dizzying cuts between different image formats and cameras recording action within the same space, we might consider its relation to William Greaves’ Symbiopsychotaxiplasm (1968) and more recently Raya Martin and Mark Peranson’s excellent La última película (2013).

If in these aforementioned films, self-referentiality generally operates towards the exploration of broader themes (the link between paranoia and fiction, the end of cinema, fidelity to reality), Telaroli’s film genuinely seems to be concerned in a fairly narrow fashion with itself, the people involved, and floating reflections on the nature of collective work in film making. For the duration of its 72-minute runtime, nothing exists outside of this fractured document of a shoot, constantly attempting to describe itself through myriad shifts between shooting formats, tone, and diegetic realities. A shot of Curtiz’s script accompanies a line-reading of a scene to be acted out in numerous permutations by different actors, which then appears through footage of another camera’s viewfinder — such is the level of refraction that we are dealing with in Telaroli’s film.

As such, the mileage of these ouroboric tunnelings may vary depending on how invested one becomes (or already is2) in this hermetically sealed, often explicitly cinema-obsessed world. While Telaroli’s recent experimental short, Silk Tatters, demonstrated a dazzling engagement with the very texture of (celluloid) film history, Here’s to the Future!’s unabashed cinephilic references — which include (but are not limited to) Karagarga and Hollis Frampton’s Lemon — seem above all to invoke the film’s genesis in cinephilia and its probable viewership in cinephile circles. The film is, then, defiantly “small”3, both in its current distribution method as well as its self-conscious tethering to the world of film and film lovers. Though Here’s to the Future! rarely feels like it goes beyond the level of (purposely) restricted experiment, there is enough formal ingenuity in Telaroli’s editing to generate some pointed reflections on image-making and the way that we engage with different images.

Perhaps the most interesting aspect of Here’s to the Future is its broad visual range, with Telaroli cutting together images recorded by seven different devices, ranging from the amateur to the professional end of the spectrum.4 Though some might baulk at the idea of watching images captured on a (now) eight-year-old smartphone, this blend of more quotidian, prosaic images with the representative regime that we associate with the narrative feature film-making of “the movies” has the effect of bridging the distance between two ordinarily distinct visual systems. Often these switches are quite striking, cutting away from the Director of Photography’s primary shot of the Curtiz sequence re-creation to another crew member’s more discreet, lo-fi record of the action. This has the effect of almost collapsing these various image forms into one, making the distance between the “take” of fictional content and the document of the shoot gradually lessen as the film goes on. The sensation we have by the end of the film is that no matter the type of image we look at, Telaroli’s relentless cuts between formats means that we are never really pulled away from a strict documentary feel, of space captured before the lens. At the end of the film, when Telaroli watches some of the rushes with two other crew members and happily comments that “it looks so much like it’s a scene“, the turn of phrase has a peculiar hollowness to it due to what we’ve just been watching.

Ultimately, this documentary feel gives us a certain sensitivity to the job at hand for the crew and especially the cast, as they do their best with the dialogue from the Curtiz film that — for the most part — tumbles awkwardly from their lips. These repetitions and re-stagings take on the appearance of work, or, perhaps more accurately, communal exercise. The latter is probably the best way to describe Here’s to the Future!, a document of a day at work amongst friends.

Along with Kurt Walker’s Hit 2 Pass, Gina Telaroli’s Here’s to the Future! is streaming on this website until the 22nd of November.