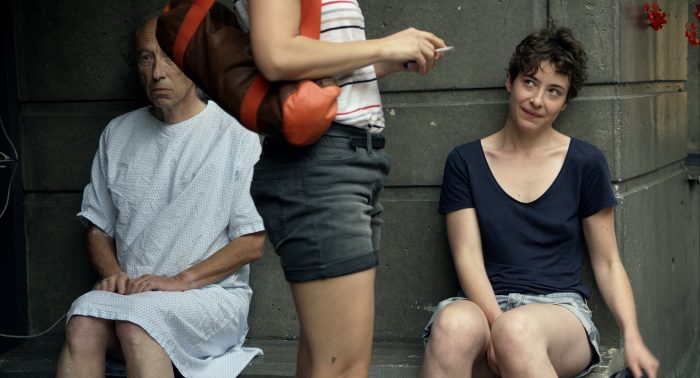 Baden Baden opens on a four-minute shot of Ana (Salomé Richard), in profile, behind the wheel of a car. Her hair is cut short and tomboyish, exposing her neck. In comparison to Godard’s vision of carefree femininity, the swan-necked Jean Seberg touring Paris in Breathless, Rachel Lang in her directorial debut presents Richard’s lean neck hunched forward, anxious and vulnerable. Her passenger sits in the backseat, unseen, while Ana chews at her lip, lost, driving the rental car in circles.

From this opening sequence which immediately establishes our sympathy, we fall for Ana – for her pretty neck, yes, but also for her quick banter and fighting spirit as she lurches vulnerably, enthusiastically, at any problems or people around her, spilling in all directions. Dressed in jean shorts and tank tops, wearing no bra, little make-up, sporting proud pit hair and her recent punk pixie cut, she is an extremely believable and likeable contemporary young woman navigating the transition to adulthood. Lang’s protagonist is not so much a deconstruction of current-day femininity but rather a strikingly real subject, birthmark and all.

Nursing various disappointments, the latest being her shitty job as a driver on a foreign film shoot, Ana joyrides the silver Porsche Panamera to her home in Strasbourg, instead of dropping it off, as instructed, at the rental office. So begins a summer spent casting for meaningful connections and her place in the world. When her best friend invites her for a 24-hour getaway, he reasons, “It’s a chance to get some air,” and she replies, “That’s all I ever do.” Yup, another wayward, floating millennial, but because Baden Baden is executed with such imagination and spirit it stands out, marking a notable debut from Lang, whose graduation short won a Silver Leopard at Locarno in 2011.

Midway, we see Ana again in profile, alone, doing 200 km/h down the highway, radio blasting, singing along to a punk song, “U-ni-sexe!” – before the catharsis is undercut by approaching police sirens. The film’s charm lies in these waves of euphoria and despondency, its resistance to any easy fix. It sticks to Ana at almost all times, but, echoing her indecisiveness, it constantly shifts tone – slapstick to melancholy, light romance to existential gloom – and it roams between Ana’s many tête-à-têtes with family, lovers and friends. These include her sparky grandmother Odette (Claude Gensac) and three archetypal male love interests: best friend Simon (Swann Arlaud), pretentious jerk ex, Boris (Olivier Chantreau), and her prematurely balding new friend Grégoire (Lazare Gousseau).

Following the camera’s interest in Ana’s gently androgynous manner of being, the film is full of flesh: necks, butts, limbs and boobs. There is youthful, erotic desire, following Boris’ alluring backside in waking dreams through an Eden-like hothouse, and there is the sobering reality of physical limits, as her grandmother can no longer use her own bathtub, suffers a fall and is hospitalised. This turn of events introduces Ana’s slightly mad quest to replace her grandmother’s bathtub with a sit-down shower. “I’m not sure what you’re trying to prove,” says her mother, overlooking the chaos mid-renovation. The DIY project anchors the film’s narrative, presenting a clear goal for Ana to latch on to in her otherwise unclear trajectory.

To the audience’s delight, the project also brings Ana’s blooming friendship with Grégoire, a self-conscious, lanky, teddy-bear type whom she meets working at the Bauhaus superstore. They tour displays of self-lowering toilet seats and shower curtains. Grégoire gets roped into helping renovate the bathroom, and the unskilled duo get to work, sledgehammering at tiles and discussing lobbing the old tub over the balcony. “I’m going to die for a bathtub,” Grégoire says, his neuroses a lovely foil to Ana’s quasi-reckless over-confidence.

Surrounded by this central arc are recurring images of bathing. While the “shower scene” in cinema is synonymous with female terror and blood (Psycho, Carrie, et. al), in Baden Baden bathing becomes something communal and nurturing: a shower stall shared turns into a sudsy, goofy sex scene; a bucket-and-washcloth clean with a visiting female friend intimates lingering desire; and a delightful moment at the hospital swimming pool sees Ana’s mischievous grandmother threaten to lower Ana, fully-dressed and seated on a mechanised contraption, into the water. The film’s title itself comes from a pun Ana makes to her grandmother, suggesting they visit the southern German spa town. Amongst these scenes of affection intrude recurring dreamlike images of Ana alone in a swimming pool. It fills with water, symbolic of the one clear decision she does make, suggesting our heroine will not drown quite yet.