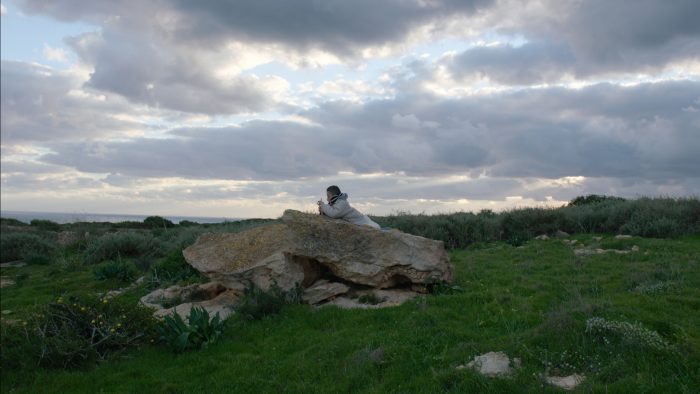 Gianfranco Rosi’s documentary Fire at Sea (Fuocoammare) takes as its subject the European migrant crisis, without doubt one of the worst humanitarian tragedies of our time. Crucial to the film’s success is that Rosi never reduces this tragic subject to an exclamation point, a troubling statistic or a news headline. His approach is observational, wide-reaching, presented without commentary and characterised by a patience, humanity and sensitivity beyond the scope of journalism.

Rosi spent a year filming on the remote Italian island of Lampedusa, which lies roughly halfway between Libya and Sicily and provides the landing point for thousands of refugees making the perilous journey to Europe, many of whom do not survive the journey. There, he focused his attention not only on the epicenters of the crisis – the ill-equipped boats heaving with refugees, the overcrowded detention center, images of vast seas imbued with despair – instead deciding to turn his camera on the inhabitants of the small, ancient community of Lampedusa itself.

Chief among them is 9-year-old Samuele, the cheeky, curious, immediately likeable son of a local fisherman. Much of the film follows the often humourous goings-on of his daily life, making slingshots with his friend, eating spaghetti at his grandmother’s house, doing his English homework, or spending time out on the boat with his uncle. His grandmother, Maria, is also a regular feature, shown cooking, phoning the local radio station with song dedications to family members, and granting kisses to her husband’s framed photograph by the bedside table.

These scenes of daily life are intercut with confronting scenes from the frontline of the crisis, creating a rhythm which seems to reflect that of life on Lampedusa. The tragic alongside the banal, the peaceful rhythms of small community life punctuated by the sudden trauma of search and rescue attempts and news of fatalities. Carefree scenes of  home-cooked meals seem strange coupled with horrifying footage of the hull of a boat filled with dead bodies. The emotional effect of this contrast is complex. I felt guilty for enjoying the moments of levity and humour provided by young Samuele, seeing my own obliviousness reflected by his. At the same time, these lighter moments make the tragedy even more affecting, cumulating to form a compassionate whole.

An essential intermediary between the local community and the crisis on their doorstep comes in the form of Dr. Pietro Bartolo, the island’s doctor. He laments the amount of corpses he is tasked with examining, showing the director gruesome images of a boy covered with chemical burns and gravely noting, “It’s the duty of every human being to help these people.” In one scene, he struggles to communicate with a pregnant migrant he is performing an ultrasound on, unable to determine the sex of one of her twins, wildly gesticulating and hoping the “cultural mediator” will come soon. Later he examines the Samuele’s chest after he presents with minor “breathing problems”. He treats both with the same amount of kindness and care.

Towards the end of the film, underwater shots of a scuba diver fishing for sea urchins provide a haunting tableaux, the moonlit sea bed serving as a reminder of the fates of those lost at sea. How many dead have been recovered from the depths, you wonder, in this very place where this man is diving for food? The remarkable thing about Fire at Sea is that while its free-flowing structure allows the audience the intellectual freedom to make such associations, its power nevertheless manages to steadily amass instead of disintegrate, maintaining its profound emotional grip. Observing the migrant crisis from the perspective of a community immediately affected and yet far removed from it, Rosi shows the tragedy unfolding before our eyes through a cinematic gaze that is both patient and urgent, empathetic and horrific.