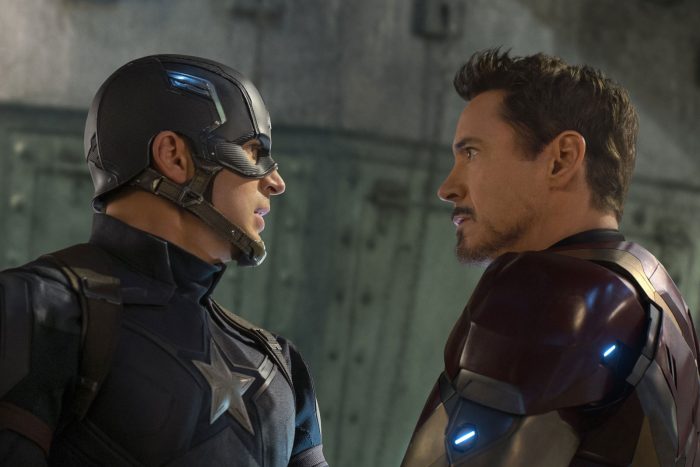 “I’ve let this conflict take me off course enough… but I won’t let it take me over.”

Captain America makes this defiant grumble in the 24th issue of his solo comic book run, the second of The Drums of War trilogy that addressed the Marvel universe crossover event Civil War. The issue saw Cap, Iron Man and respectively cordoned-off cells of the Avengers come to loggerheads over legislation forcing them to turn their identities over to the government. Cap’s statement in the midst of the battle was as much a pledge by the freedom fighter not to falter in his own hero duties as it was for writer Ed Brubaker, who had worked with collaborators since November 2004 to bring Steve Rogers’ world of espionage to life in meticulous style. Even if this company-mandated stunt had their wing-capped Avenger at its centre, they would make him pull an all-nighter to keep to the course they had been laying out for months.

Fast-forward 12 years to Marvel Studios’ cinematic adaptation of the storyline, Captain America: Civil War, and we have no such luck. It might begin as Joe and Anthony Russo’s continuation of the conspiracy thriller antics they enacted in 2014’s The Winter Soldier, but the directors eventually steer their Chris Evans-played Steve Rogers off course and into a bramble of past and future plotlines. The resulting film is wracked by as much of an identity crisis as a certain other recent superhero brawl, however fitfully enjoyable.

The first hour is mostly dedicated to the mystery of the various enemy attacks that have the Avengers shackled to United Nations-approved oversight, with the Winter Soldier (Sebastian Stan) framed for a deadly explosion that destroys a UN peacekeeping council and Rogers having to track him down with the help of the Falcon (Anthony Mackie). Subtitles and country names flash onscreen in blunt style, while action sequences, like an opening sting operation in Nigeria, are shot at a high shutter speed. They carry the air of a dull 24 episode long before a torture sequence involving an overflowing sink and Daniel Brühl’s remarkably non-superpowered antagonist Helmut Zemo enters the picture.

The arrival of the big, trailer-teased airport fight brings the film alive with the same sitcom-y quips and inventive set-piecing that powered both Avengers instalments, but it throws a wrench in the works of what came before—the very thing that set Cap’s adventures apart from his allies. The denouement introduces psychological thriller trappings and pays off clumsy establishing scenes from earlier (a 1991 flashback prologue, an MIT presentation where Tony Stark revisits the last time he saw his parents), which has effect of both delighting through clever scenarios and frustrating through the discordant way it’s presented. It’s doubly frustrating since the script, credited again to Christopher Markus and Stephen McFeely, hasn’t lost any of their panache, with smart characterisation and a metric tonne of witty dialogue flowing through the perfunctory aesthetic of dim hues. The vastly expanded cast, which now includes the roster of heroes introduced in last year’s The Avengers: Age of Ultron, are as well-served as they’ve ever been; which is to say that Robert Downey jr’s Iron Man is as charming/irritating as you remember, Evans as taciturn, Scarlett Johansson’s Black Widow as ice cold, and Jeremy Renner’s Hawkeye just as cocky. (Chris Hemsworth’s Thor and Mark Ruffalo’s Hulk are smartly relegated to next year’s Thor sequel).1 Paul Bettany’s Vision and Elizabeth Olsen’s Scarlet Witch make the jump from Ultron without over-stacking the deck, generating warmth around the latter’s house arrest and teasing an oddball romance, and Don Cheadle’s War Machine fares well, even when he lands on the wrong end of an especially-painful scuffle between Steve and Tony. Not so lucky in returning is William Hurt, who heads the legislation as a nerfed iteration of his military general character from The Incredible Hulk; worse-off still is Emily VanCamp’s Agent 13, who continues to be a baffling addition to the Captain series with barely five minutes of screentime.2

Of the new arrivals, the most impressive is undoubtedly Chadwick Boseman’s Black Panther, who puts a face to the international diplomacy that Cap and his friends are jeopardising and lends credence to the push-pull debate even as it slowly turns into raw psychological conflict. Meanwhile, hyphenated insect fighters Ant-Man (Paul Rudd) and Spider-Man (Tom Holland) are dropped into the ensemble as goofy-but-effective stocking fillers, and while Rudd has the same bright charms that saw his frenetic 2015 debut scrape by, Holland is positively luminous in his first ever appearance as both Parker and the web-slinger — his twenty-or-so minutes of screentime are a hilarious treat.3 Even as the story couching them severely chops and changes tone—Rudd, in particular, comes to embody the giant tonal tipping point that people initially feared with this enterprise—the dynamics of their conversations are, in and of themselves, pitched perfectly, which is the one thing that these Marvel Studios can be counted on to do well. Many have called out these isolated character interactions in their praise of the movie, but what fixating on them misses is how incoherent the wider picture is, and how needless they make it in an era where YouTube will host character-specific highlight reels in six months.

It’s a maddening experience, see-sawing between relishing the interplay of that gargantuan cast and lamenting the lack of a throughline, especially considering this has the studio’s best-staged action set pieces (muddying digital aesthetic notwithstanding) and the most interesting antagonist yet—however steeped in franchise lore his reveal is. The result of this absence of connective tissue or summative satisfaction is that it all feels shudderingly hollow; a stack of briefs filled to a fault by a pair of journeyman directors. Even roundly-denigrated MCU efforts have a more consistent MO—Thor: The Dark World and The Incredible Hulk only try to be fun romps, for instance, and whatever stick Age of Ultron might get in some circles, it remains both a distinctly Joss Whedon affair and a story that requires only the first Avengers as set-up. Civil War requires the first two Captains, Ultron, Iron Man 3 and more to hang together, which is not so hard to follow when Wikipedia can catch you up but is hard to enjoy when it’s a symptom of a film thematically and tonally stretched in too many directions.

Captain America: Civil War doesn’t quite warrant calls for a collapse of the “superhero economy”, because Kevin Feige and co are just as capable of delivering on auteur-like talent as they are of chasing it away, and even if they weren’t, there’d be another factory-line fad ready to take its place once people were bored (probably also funded by Disney). It’s simply a bum note in a business output that attracts some great talent, especially when considering that this is the last installment in Cap’s own saga for the foreseeable future. What Joe Johnston started with such distinctive fun and fervour in 2011’s The First Avenger is a distant memory, and thanks to forces out of his control, the Man Out of Time’s solo tour of duty has been put to an unfocused, disappointing end.