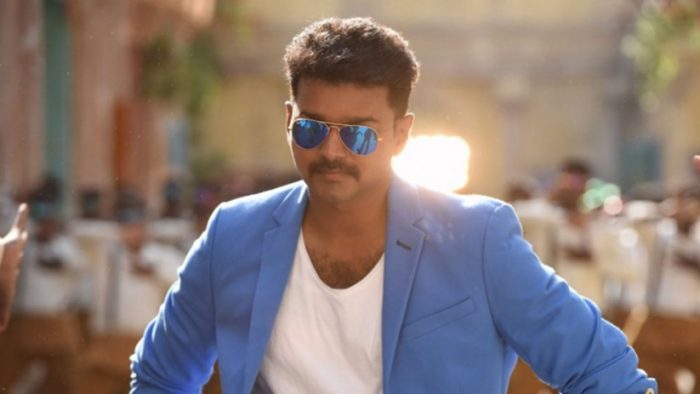 No one does the masala entertainer genre better than the commercially mainstream film-makers of South Indian cinema.1 This is somewhat a back-handed compliment. While I agree that masala films are thoroughly enjoyable when done well, and they do have a special place in Indian cinema, the genre has also been responsible for stifling a more creative approach to film-making and freshness in narrative styles, as the same template is recycled again and again to create generically forgettable money spinners. The situation isn’t helped by a devoted culture of celebrity worship that is prevalent within audiences of South Indian films.

It’s somewhat disheartening that Atlee so readily adopted the masala film template in Theri. He burst on to the scene with Raja Rani in 2013, which worked as a restrained examination of post-marital romance packaged as a commercial rom-com. The approach was mostly fresh. Here was someone who wanted to explore how much he could play with them, though preferring to stay within conventional boundaries. After all, Atlee had assisted director Shankar in two of his projects: Nanban (2012) and Enthiran (2010). Shankar has garnered praise over the course of his career for incorporating “unconventional ideas” into the masala entertainer template. It seemed that the pupil would follow in the footsteps of the master. In Theri, however, that has proven not to be the case.

The story is an utterly predictable revenge saga that offers nothing new in terms of narrative. We are introduced to Joseph Kuruvilla (Vijay), a meek pushover who is raising his daughter on his own. Straight off the bat, you know something is wrong with this picture. But don’t worry, this film has no intention of using any clever narrative devices. It doesn’t demand that kind of effort from the viewer. Almost on cue, you get the flashback scenes establishing Vijay’s character as a fearless cop who can do it all with wit and charm, leading up to the tragic circumstances that force him to pursue his current lifestyle. This is of course, a rather obvious set-up for the brave cop to rise from the dead (quite literally), right past wrongs and claim his revenge. You’ve all seen this before many times, not just in Tamil cinema, but also in Vijay’s recent films.2

What keeps this film alive is Vijay’s earnest performance. As the meek Joseph, he does well to truly restrain his hammy tendencies that have served him well over the years. This makes the eventual transition and the arrival of the Vijay persona that the audience wants worth the wait, even if you know what’s coming. The transition feels earned, and that is a big compliment to Vijay’s commitment to the role. It’s not that he’s required to do anything remotely different here than the usual fare (Vijay can sleepwalk through such a role) but that’s exactly the point. He doesn’t. He makes you want to believe that there’s more to the narrative than meets the eye. That’s a tricky tightrope to walk and Vijay passes the test with flying colours.

It’s no secret that Vijay’s part-action hero, part-comedian, and part-charming lover boy avatar is his home turf, and those elements are on full display here, but there’s also another Vijay; one who’s allowed to show real emotion. Joseph’s connection and love for his daughter feels real, and is established quite expertly in the opening shots. You connect with his tragic past because for the first time in a long time, you can see that he feels vulnerable. This is not just a machismo show. Vijay taps into the reservoir of emotional melodrama to great effect in a narrative that allows him little to play with.

The focus is well and truly on Vijay and the supporting cast is nothing to write home about. Amy Jackson as Vijay’s daughter’s school teacher and love interest has her lines dubbed in Tamil. One is more impressed with the change in her fashion sensibilities for this film (she sports a bob with glasses, because she’s a “teacher”, you see) than her acting abilities. Still, Jackson doesn’t feel out of place here. That is as much a compliment as anything whenever we look at revenge dramas and way they are usually used by commercially mainstream Indian cinema, being overtly obsessed with masculinity, maleness and its many manifestations. Women are often reduced to be placeholders in such narratives. They exist to be pursued by the hero, molested, raped or assaulted by villains in different ways, only to die in the arms of the hero, thus ‘inspiring’ a cycle of revenge. They are not people here. Worse, they are not even two-dimensional characters. They are merely plot devices that exist for the sole purpose of a turgid dick-measuring contest between their male counterparts. It is in that vein that Atlee uses Vijay’s main love interest, played by Samantha Ruth Prabhu. To her credit, she is able to infuse such a lethargic excuse for a character with some sort of vigour and zest. Her naivety and bubbliness is in stark contrast to the cynicism of the world that her character lives in.

G.V. Prakash’s songs and music allow Vijay the showman to be in his element. It is in the songs that you can really see Vijay shine. He often uses his comedic timing, combined with his incomparable dancing abilities to great effect. A Vijay dance number is a spectacle in every sense of the word. And yes, the spectacle does work. The songs transport you into the fantasy world they are supposed to, even making you forget that the narrative makes absolutely no sense.

The film could have been chopped by at least twenty minutes to make the narrative tighter. Anthony Ruben is guilty of the cardinal sin that most editors working on masala entertainers are guilty of: they indulge the populist elements more than absolutely necessary. George Williams’ gorgeous cinematography makes up for this complaint to some extent. Even though the narrative tests your patience at times, at least the overall product is exceptionally pretty.

Overall, Theri works mainly because of Vijay who is able to infuse a tried-and-tested narrative with enough zeal that you are willing to forgive the film’s narrative indiscretions. The commercial masala entertainer elements are sprinkled indulgently throughout, and it is Vijay’s ability to emotionally carry the audience that ultimately saves the film.