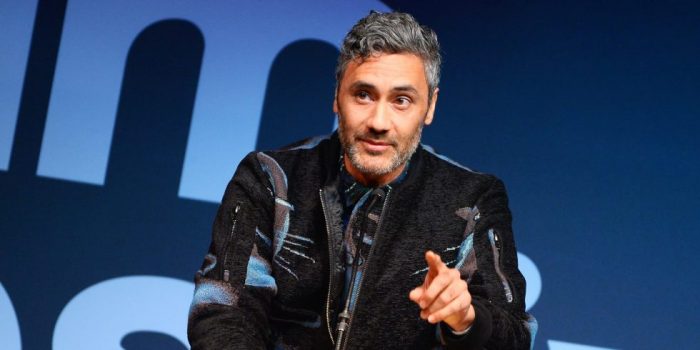 Taika Waititi is a filmmaker that needs no introduction. The New Zealand director of Eagle vs. Shark and What We Do in the Shadows is a unique filmmaker who’s profile only seems to be getting bigger – his next project, after all, is the next Thor film. His new film, out this week in Australia, is Hunt For the Wilderpeople, an action adventure comedy based on the classic New Zealand novel Wild Pork and Watercress by Barry Crump. It chronicles a wayward foster child Ricky (Julian Dennison, known for turns in local films Shopping and Paper Planes) and his foster uncle Hector (Sam Neill), who go missing in the New Zealand bush and become the subject of a national manhunt, complete with shoot-outs and exploitation-style car chases. The film has already seen monumental success overseas, and is now the highest-grossing local film ever in New Zealand; a record previously held by Waititi’s own Boy. We caught up with Waititi recently.

I just first wanted to say congratulations on this amazing film. I loved it so much.

You shot on a lot of remote areas that film crews hadn’t been allowed into before. What was it like to put an area of New Zealand on film that hadn’t been before?

It was a real privilege to be given that access. We befriended the army, who have a lot of land. (laughs)

Did that help with filming that car chase? (laughs)

Yeah, yeah. (laughs) We were like “…can we borrow some tanks?” (laughs) They have this big section of land that they do their training and stuff on down in the central part of the north island. We went down there and drove us around, and it’s such beautiful, untouched land. We see some of it in the film, and it was really cool to shoot something no one has seen in a film before, and something that very few people have seen with their own eyes. We even went to some very old forest as well to shoot, they gave us permission to go into. A lot of the places are really untouched. It’s quite an honour to be able to go and do those things.

I even thought of films like Road Games, which possess a reckless, imaginative energy that you don’t really find in movies these days.

I really wanted to have some over-the-top characters, and these people that did crazy things. We’ve done it on every film, but having a film like this where people are just over-the-top, you know? This social worker, who doesn’t exist in real life, or, you know, 95% of movies. It was sort of the way it was done back then in those 80s films — you just had these characters that screamed all the time, or suddenly turned up on a tank. And you don’t actually explain any of that stuff, it’s just the way it is. It should be like that. So I wanted that in Rhys’s character. There’s always that really madcap character like that in those films. Those things were important to… not even building the tension, but just building the layers of craziness by the end of the film. It just escalates. So by the time you get to helicopters and army and tanks and all these cars, it’s so ridiculous and over-the-top that it’s basically Ricky’s fantasy come true.

In both Boy and Wilderpeople, these characters find escapes from their troubled situations, through their imagination and passions. What interests you about the influence of pop culture on one’s identity and memories, particularly as a child?

I feel like I grew up in a time when there were really heavy pop culture influences coming through from America… and the UK, but mainly the States. It was almost like you had to keep up. It’s even worse today, but back then there were so many brands and cool things, and then you had to watch out that you didn’t become uncool. So, those things… I guess that way of looking at things has always appealed to me, and the fact that Ricky’s into things like hip-hop. His character’s very interesting, because he probably isn’t into hip-hop, but he thinks it’s the way it should be. He probably appreciates some of Tupac’s poetry, but I don’t think he really is into Tupac… that’s the way I see it. (laughs) He’s more like Julian, who’s not into hip-hop at all, but he feels like “oh, I have to say I am to be cool”, because that’s what gangsters are into. But yeah, a lot of the things, I was very careful not to put things in that were too contemporary, because my big worry is if you put a reference in that is relevant right now, the danger is in five years your movie is super obsolete. Those things aren’t cool anymore or they don’t exist. I’d never get a character to talk about Snapchatting. Who knows! Snapchat might be gone next year. So we were careful of that stuff.

I guess that really restricts when it’s relevant.

Yeah! But selfies… I was doing selfies on film cameras. That’s not a new thing.

This really reminded me of those 80s family films that you really don’t see anymore, which could be enjoyed by adults and kids, and which have that sense of realism…

Yeah, yeah. Things like The Goonies… there were definitely influences from things like Thelma and Louise, 48 Hours, Paper Moon… even Up, that Pixar film. There’s a lot of that. They’re not necessarily big influences, but I guess they just reminded me that this kind of thing works.

Kids are so much smarter than we give them credit for. We know that from seeing all the Pixar films, especially something like Inside Out, which I think is more suited to grown ups. But yeah, you should treat kids as smart individuals who can think about things like emotions and what it means to be sad, and that it’s OK to be sad, and things like that. God forbid we have Beverly Hills Chihuahua forever, you know? Not that I’ve seen it, and I shouldn’t judge, because there’s probably…. (laughs) but yeah, I look at the poster, and I’m like (laughs) “is that what I want my kids to grow up watching, or do I want them to watch Miyazaki films and things that make them think?”

I feel like these days there’s really films for kids and films for adults, but there really isn’t that crossover. The movies are quite juvenile.

Yeah! It’s important for me to make a film that you can take your kids to. On Shadows, we got a higher rating than we were anticipating, we got rated 13+. That was sad for the box office, but it just means we got so many messages from people saying “oh, I went to the cinema but I couldn’t get my kids in. I’ve got to figure out how I can see your film”. It’s a bummer for families to be able to do that. And when you think about who’s going to the movies these days, they are families. The great thing about what has happened with the box office of this film is that, you know, you see families taking their grandparents and their kids. They’re all going to see the film, and even repeat viewings! It has been amazing.

Definitely! I’ve seen on social media the amazing response it’s had with such a wide range of people…

Yeah, absolutely. And that was the big plan right from the beginning, [with] my friend Carthew, who was a producer on it: that we wanted to make something where we consciously made sure that people weren’t swearing in the film, that we would not get that rating. You know, like a PG or something, where you could take your kids, because I wanted everyone to see it! (laughs)

What do you think modern filmmakers could learn from these self-taught, adventurous filmmakers of that era?

I don’t know… I think the physical style of the films is very interesting. It’s a cool thing to study how they did that stuff, and even bring back some of those choices like zooms and cross-fades that now, in editing schools, they say are very uncool. But there’s so many cool things from the past that aren’t cool and [can] be cool again, and I think it’s good to look back to the old styles of filmmaking. Because there are trends in camerawork all the time, and then people get sick of that and they change. For instance, nowadays there’s always a shot that follows a character from behind and it’s like the back of their head as they walk. There’s so many films that open with that shot that it’s embarrassing. Hopefully people realise that it worked a few times, but now we have to stop doing that. We have to keep evolving and trying new things, and I think often to do that you have to keep looking back and what we were doing before. Because, I’m pretty sure that there are no “new shots”. There are no shots that we haven’t done before. In the 100 years of making films, we’ve done everything. (laughs) I’m pretty sure.

I read in an interview that you said the film industry in Australasia has changed from these types of entertaining films to “festival films”; ones that have to adhere to a specific idea of prestige. Do you think expectations for New Zealand films have changed, and is that a hindrance?

Well, I hope expectations have changed for the better now. I mean, I was probably talking about… I don’t know when I said that… but I was probably talking about when I started, it was a very festival-oriented industry. Like, you wouldn’t go for making this type of film in 2005. And, I feel like that’s changed again, it’s in fashion again. Trends change in filmmaking, and people now are realising that you can get people to see your films if you think of the audience a bit more, and that’ll swing back again. We can make super depressing films about drug dealers again, but now, it’s OK to laugh and be emotional, but also have car chases and be ridiculous as well. I think people need some ridiculous stuff in their lives.

I guess it’s just all about finding that balance.

Yeah! As long as you keep that truth and the heart of it, then you can pretty much do whatever you want in a movie.

You have this beautiful movement between genres going on, where we get to see your work in a variety of different films. What’s it like to move between projects like Wilderpeople to the upcoming Disney movies Moana and Thor: Ragnarok, and to work in all these different ways of conveying your ideas?

I feel like I would have been a little more nervous about it in the past, but now I feel a lot more relaxed about all these shifts and changes because I think after making four films, I know there’s some sort of audience for the way that I think and some of my ideas, and all my films have been well-received, so I’m confident I have some sort of audience. So if I can bring at least some of what I bring to those films, to bigger projects, there will be an audience. I just have to watch out, you know. I can also work within the sphere of that studio system, delivering something that they are really happy with as well. It’s a different thing because I’m less of an auteur, that word I hate, on these other films, but that’s OK. I care less about that now; about being the sole creative on everything.

Hunt For the Wilderpeople is out now in select Australian cinemas.