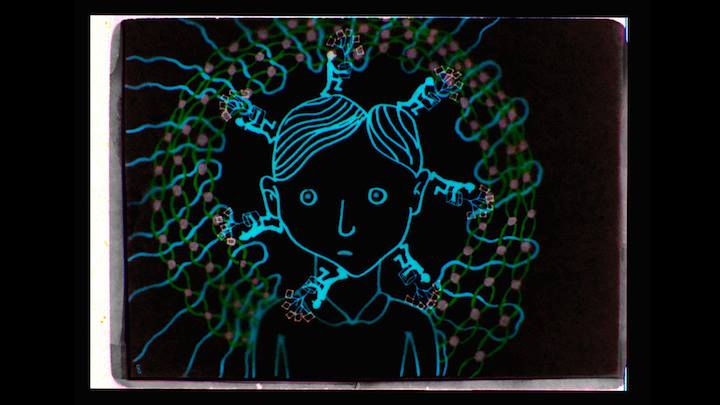 ‘Is the Man Who is Tall Happy’ is an 89 minute animated film conversation that takes place between Michel Gondry and Noam Chomsky, and you’d think from this that it’d be a bit more entertaining, but it really isn’t. Like most people who watch it, what will be the main attraction are the names Michel Gondry and Noam Chomsky, but it does little to maintain interest, let alone develop it through conversation, and the charms of the animation that the film first rests on, is unable to support sagging content and soon grows tiring. 89 minutes is somehow made to feel like 2 hours through conversation that give the impression that Gondry was lined up outside a hotel room and given a mere 15minutes with Noam Chomsky before being ushered off and then haphazardly deciding to make a film about him.

The premise was promising and speaks to a boom in conversational philosophical films such as Pervert’s Guide to Ideology by Sophie Fiennes, that aim to bring philosophy to a mainstream audience, but what these films rest on is the ability of either the philosophy or the conversation to pull the audience in and this film failed to do either for me. I appreciate Michel Gondry’s attempts to bring the linguistics of Chomsky to a broader audience who are probably already familiar with his politics, but in the limited understanding he has of logic and sociolinguistics himself, it makes for one-sided conversation eliciting half hearted responses that tend to be patronising and disinterested on the part of Chomsky. Gondry does his best impression of an excited amateur philosopher, mentioning Descartes and generative grammar showing he’s read Chomsky’s work, but doesn’t seem wholly capable of matching Chomsky in philosophical discussion, a fact that is obvious in Chomsky’s mixed countenance of disinterest and arrogance.

The fact that an interviewer may not be matched in philosophical chops to the interviewee need not be an issue if they were a hugely engaging speaker themselves, but Chomsky’s voice is monotonic and he seems to have little interest in trying to flesh out concepts for Gondry and the audience, than simply correcting him. This produces some light comedic interludes with Gondry apologising for his English and explaining the intended meanings of questions that Chomsky was so quick to dismiss but the conversation doesn’t really go anywhere between these and neither does the film. Gondry then makes a failed attempt to engage Noam Chomsky personally, making some headway with brief glimpses into his precocious childhood of prolific reading and early intellectual promise, which Chomsky seems too happy to emphasise. He mentioned his memories of studying the language structures in Hebrew at age 10 with his father and mentions his consequent upbringing of his own precocious children with whom he read theories of relativity with at the age of 10. Chomsky flat out refuses to open up about his wife’s death, and understandably given that this is a sensitive topic and also that this isn’t a biopic but a conversation. Nonetheless Gondry presumes to animate a sequence following this rebuffed inquiry imagining an idyllic couple riding horses across clouds. Gondry reverts to emotional connection in the absence of tense philosophical conversation and fails to bring that out of Chomsky.

I have an appreciation of Gondry’s intent with the film and his impressive animations that show the power one man has with a texta, but what upsets me most is that he’s chosen a notably difficult interview subject, and failed to penetrate that surface and bring out anything engaging intellectually or emotionally. Chomsky could have made some attempt to seem as if he was interested in being the subject of the film rather than giving the impression that his excitement comes about in announcements of filming breaks. The thing that comes to mind here is: “Chomsky, you’ll never be Zizek, so why did you bother making this film?”.

Gondry states at the beginning of the film that the inevitable presence of context in a film can often overshadow content, and perhaps in animating the film makes an attempt to redress that it is a construction and necessarily told through his perspective, as evidenced in the frequent witty interjections, however this attempt to refocus attention onto content fails in that there is little content there to begin with, and what is there barely skims the surface and is scattered in a way that is disengaging. What little captured footage is included in the film is shot on 16mm film on his (very loud) Bolex, but I find this decision a bit baffling considering that he uses very little footage and what he does include isn’t particularly well framed or shot. If he wanted to give the semblance of reality, that the conversation was filmed to become inspiration for the animation, why choose a 16mm camera, only to not show this unique film product or make an effort with it.

All in all what I dislike about the film is that it is boring and half-baked. What little philosophy and linguistics Chomsky does discuss feels either like patronising and simple theories abstracted for no reason but to belittle Gondry and correct his non-academic discourse, or presumptuous of our familiarity with his theories of linguistics such as generative grammar, which I had to look up after the film because it was mentioned so much but with absolutely no context or attempt to introduce the audience. The audience this will be exposed to are not all phD students in logic or linguistics, and shouldn’t have to be, but are obviously interested in philosophy in some form and require only an engaging speaker to flesh out ideas with Chomsky was unwilling to do and Gondry unable to do. This film does nothing beyond the promise of the names attached to the project, and will contribute nothing to your film-going experience except to provide a status heavy film to drop when you next find yourself in a crowd of hipster film-goers that love Gondry and Chomsky.