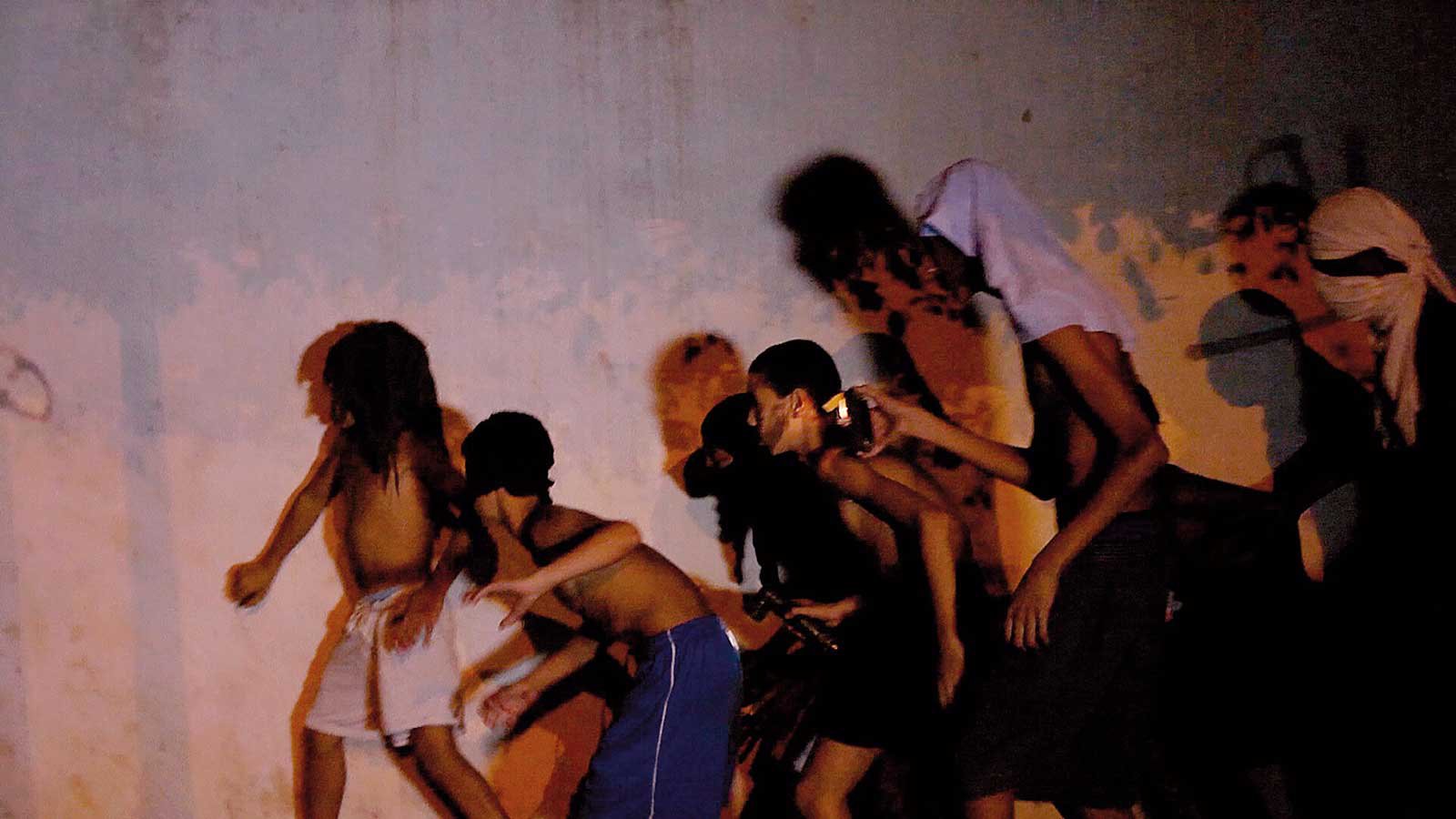 Winner of last year’s CPH:DOX Best Documentary category, the postcolonial reverie Bloody Beans is the first feature by French-Algerian filmmaker Narimane Mari. Marking the 50th anniversary of Algerian independence, the film takes a sharply experimental approach in its recreation of Algerian revolt under the French occupation, brought to life through a series of series of allegorical scenes that Mari workshopped with a group unprofessional child actors from the rugged coastal area in Algiers. It’s an interesting – although disappointingly executed – cinematic choice, drawing heavily on the cooperative playbuilding theories of Artaud and The Living Theatre, specifically Artaud’s quote, “It is better to be than to obey.”

We meet the children in a surreal opening sequence by the seaside, the sun beating down on their skinny bodies as they crawl over rocks and tumble into the water. Occurring sometime during the country’s struggle for independence from France, the scene turns to a discussion between the boys as the mourn their meager diet of red beans. What happens next is vague: spurred by hunger, the children join forces to raid a reported stash of bananas and chocolate from the French enemy barracks. A simple act of rebellion becomes the backbone to a broader meditation on political freedom and subversion, which is brought to life by the children as they become involved in a string of increasingly bizarre and symbolic situations: a confrontation with an angry man wearing a pig mask, a touching sing-along with a domestic violence victim, and the kidnapping young French soldier who they hold hostage on a beach.

These extended set pieces form the basis of the film’s unusual structure, which dances from one loosely connected ‘movement’ to the next. Bloody Beans is a challenging film to review, not least because it leans more towards the kind of avant-garde movement piece you might expect to see produced in a downtown New York theatre company. While ambiguity should play a strong part in any film matters of collective dealing with memory and national trauma, the film sadly trips over itself in its attempts to run from the ‘capital H’ Historical film, and all the patriotism and trite generalisations that come with it.

My issue here is not with the film’s goal – it’s with the form. Indeed, it’s arguable whether or not ‘Bloody Beans’ should be a film at all. Attempting to create a spontaneous and collective experience of subversion for the screen rather misses the point of the ecstatic experience – that it should be felt, and not merely observed from a distance. There’s a physicality, a community to this kind of art that simply doesn’t emerged in a darkened movie theatre. Like watching a taped recording of a Rolling Stones concert, it’s just not the same.

While I’m not usually too fussed about formal experimentation, the poorly lit long takes of children playing dress-ups and dancing in a cemetery made me feel like I was watching a morbid take on Playschool, only this time unable to suspend my disbelief and feel involved in the way I could at five years old. The idea of ‘play’ has worked before on film in thought-provoking and challenging ways – Jacques Rivette’s epic thriller Out 1, also at this year’s MIFF, is a textbook example. While Rivette employs improvisation as a psychological foundation on which to build a series of fascinating, tangential plot developments, to build an entire film on this premise feels like a wasted opportunity. Throw into this grand kerfuffle an overly dramatic electro soundtrack, and the entire film lapses into ‘Overly Ambitious Freshman Film Project’ territory.

That said, it’s beautiful shambles of a film, and novice d.p. Nasser Madjkane – formerly a professional photographer – does an admirable job of taking us along on this spectacle, god knows it can’t have been easy. While most of the film involves kids running amuck, Madjkane works with an impressionist’s speed to immortalize their fleeting movements: seasick camera movements and flakey spot-lighting lend the cemetery dance sequence a truly ghostly aura. Madjkane’s eye for texture is equally impressive, his vivid close-ups of turquoise waves as they slink dangerously over the rocky shore are hypnotic, a striking allegory of serenity and innocence met with the violence of war. But then again, that’s it. All you’re left with is a couple of elegantly framed images, the photographic remnants of the beautiful performance that never was.