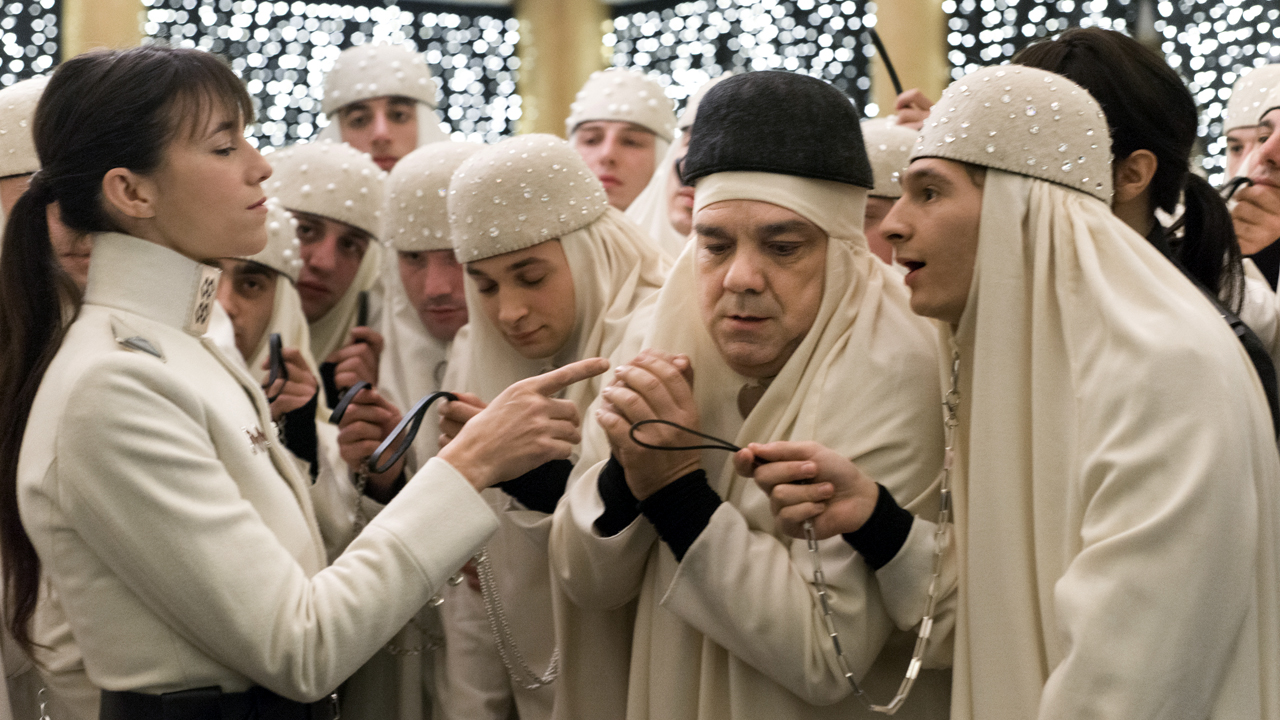 In the fictitious matriarchy of the People’s Republic of Bubunne, women are warlords and sexual aggressors while the men are meek and complacent homemakers. Quite frankly, you’d be hard pressed to find a more dynamite one sentence pitch. Born from the cartoons of writer director Riad Sattouf, Jacky in the Kingdom of Women is a satirical depiction of a matriarchal dictatorship, based around the narrative structure of Cinderella. Though establishing a distinctive dystopic world with Gilliamesque flair from the get go, Sattouf leaves satirical elements slightly underdeveloped, too often straying towards vaguely dramatic interludes in service of narrative, to the detriment of humour or insight.

The film opens on the titular Jacky (Vincent LaCoste) as he vigourously masturbates while gazing upon an image of the Colonele (Charlotte Gainsbourg). His life is a simple one, as he serves the women around him and lives by the Bubunne dictum ‘get married, eat your mush and pray to the horsums to purify your soul’. When news comes of the Bubunnery Ball at which the Colonele will choose her ‘Big Dummy’ (husband), Jacky is adamant he will attend and after turning in a state fugitive, gains an invite. However, after his mother dies, he is forced to live with his hateful aunt, uncle and cousins and it’s at this point that the Cinderella story kicks in. Basically, at some point, he meets the Colonele and all kinds of hilarious things ensue. It’s an interesting exercise in transposition, as most of the film’s images suggest their opposite. It takes a bit to get accustomed to, the familiar sci-fi staples of amplification and exaggeration intriguingly complicated and compounded by inversion. The sequence inside Bubunne’s palace is brilliantly evocative, as men rattle their leashes and swarm around the Colonele, accompanied by a dissonant chorus of voices, which appropriately are not entirely dissimilar to the sound that accompanies the monolith in 2001: A Space Odyssey. It’s a brilliant moment and though it strays away from satire, it’s one of the strongest images in the film both in its composition and its undeniable transposition into a patriarchal context.

That said, for a film whose main drawcard is the promise of an absurd but intricately developed world of its own, it’s disappointing that it’s so trite narratively. It’s faithful to the Cinderella story to a fault, undoing brilliant satirical work for its upkeep. The religion in the Women’s Kingdom is based around the Holy Horsums, all knowing, sentient horses who psychically commune only with those of a true and pure heart. What seems to be a glorious lampooning of religious superstition and fascist symbolism disappointingly becomes a straight faced plot device, as a Horsum momentarily adopts the role of Jacky’s fairy godmother. It’s typical of the broader commitment to the Cinderella story, as comedy makes way for Jacky’s mistreatment at the hand of his horrible cousins, his escape and his eventual infiltration of the Bubunne palace. Though it’s obviously a decision by the creators to tell a certain kind of protagonist-based story, it ultimately compacts a narrative that demands expansion.

The film’s best element are found in its expansive moments, as in its forays into Bubunne’s media. In the ubiquity of ridiculous domestic soap operas, reality TV and particularly newsreel, Bubunne is shown to be a world within the grips of a very dominant visual culture. The Bubunnery Ball is played out as reality TV, wide eyed young men freaking out on camera, screaming ‘I’m going to marry the Colonele! I’m going to be Big Dummy!’. This self reflexive look at visual culture is a step in the right direction for Sattouf and informs the film’s subversive feel but unfortunately, these moments are few and far between.

Considering this self-reflexive satirical look at media within culture, it is disappointing then that this self-reflexivity is underdeveloped within the body of the film itself. Cinema, that form which has been described as the history of men looking at women, should be able to reflect on itself doing so, particularly in a film so decisively concerned with gender. Though it does experiment with Jacky’s own gender bend and his ambiguous interactions with the Colonele, there’s only so many times Jacky can gaze longingly at, stroke his pocket photo of and beat off to the thought of the Colonele before the film sits itself itself squarely within a well worn cinematic tradition of young male sexuality. Within the context of the film, I was reminded of 4:3’s first roundtable which focused on male directors depicting female sexuality and the countless issues at play there. Considering how fraught such a subject already is, it becomes predictably convoluted when a male director attempts it through a male surrogate. That this question of the cinematic gaze is left unacknowledged is disappointing, particularly after the great fun had messing with various televisual ones and as such, it feels like a massive missed opportunity.

The film focuses on Jacky a great deal, rather than on the much more interesting, promising Women’s Kingdom and in doing so the opportunity to engage in some broad, biting satire is lost in the development of an emotional access point. Jacky is in every single scene, we interpret all environmental information through him and throughout the film, our response is his. When the familial, societal and sexual violence inherent in the system happens upon Jacky at various points, our emotional contact with Jacky makes it difficult to laugh at, deprived of the distance that distinguishes comedy from tragedy. Parts of it don’t feel even close to funny, sexual violence particularly falls flat, occupying a predictably uncomfortable territory within the film. It’s depicted ambiguously, landing somewhere in a confusing non-committal middle ground between humour, shock and developing the dystopia. Though we care about Jacky throughout, the world and story we ultimately end up getting exposed to isn’t as broad (or funny) as it initially felt it would be, bound to the relation of our dominated protagonist.

Ultimately, I wish it had been less Jacky, more Women’s Kingdom. Inverted or not, it still fails the Bechdel test. Despite that, and even though this is a largely negative review, it is still a fascinating film that plays with an interesting concept, and however much it restricts itself, there is enough here to engage and have fun with.