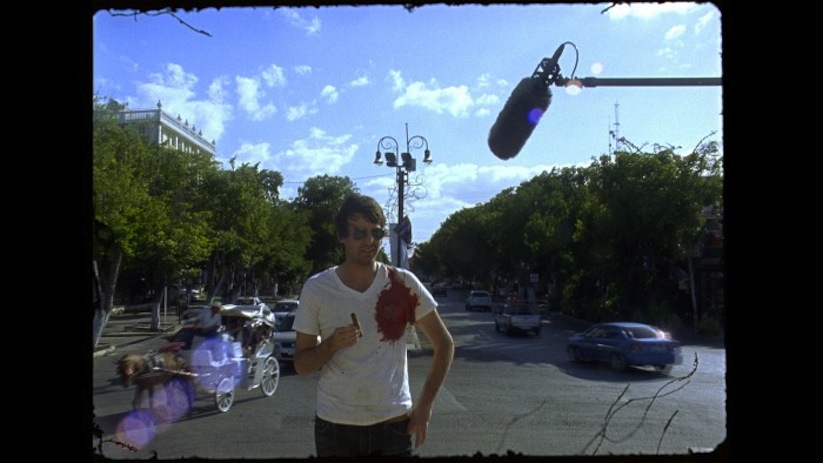 Appropriate to its subject of the death of celluloid and the last film, La última película was in fact the only film (not counting retrospectives) projected on celluloid at the Melbourne International Film Festival. With the move to the DCP projection format practically an international standard for all but a select few specialty festivals,1 Mark Peranson and Raya Martin’s film was always going to be something of an anomaly everywhere that it played.

What are the stakes here? What is the purpose of sticking to celluloid in the digital age? A lot was (and is) made of the fate of the medium as a result of the digitisation of both the movie camera and the projection process. Anyone who has sat through a university film lecture in the last five or so years is bound to have at least caught wind of the debates surrounding the fundamental challenges to the ontology of cinema and its relationship to the real brought on by digital technology. Briefly, the argument is that the profound and inextricable liaison between the real and the cinema inherent in celluloid technology2 – based as it is on the direct transmission of light on to physical film strips – has been lost with the infinite mutability of the digital.

This loss, it must be said, has been mourned more by academics than anyone else, and their criticism smacks of a sort of elitism quite separate from the realities of film production. By substantially lowering the cost of making and particularly distributing a film, there has been a great democratisation of the tools of filmmaking.3 Much to the benefit of an alternative film event like MIFF for example, the reduction in cost means that is easier than ever to make a film with less of a dependence on financial support, which surely assures that a greater variety of voices can find their expression.

Thankfully, La última película is neither an academic exercise nor a purely philosophical tract that doesn’t take into account these aforementioned political currents of the celluloid/digital debate. It filters its preoccupations with the archaic technology through a self-reflexive narrative that allows the filmmakers some kind of irony and detachment from the gesture. In the film, a movie director (played by Alex Ross Perry, himself a director of the festival hit Listen Up Philip (MIFF 2014)) and his local guide (played by Gabino Rodríguez) travel through the Yucatán state scouting locations and attempting to shoot  “the last movie in the world.” There is a complex riff on Dennis Hopper’s 1971 cult classic The Last Movie beyond the film taking its name from the Spanish translation of the title; most prominently, it transplants the traveling filmmaker premise of Hopper’s film from Peru to Mexico to coincide with the end of the world as predicted by the Mayan calendar in December 2012.4 Perry’s ‘director’ figure is by turns ego-maniacal and cripplingly self-aware: he speaks of his film in highfalutin terms as a relic that will last as long as the centuries-old Mayan artifacts, while also openly cringing at the hordes of white people appropriating Mayan culture at the Chichén Itzá heritage site.

La última película’s film-within-a-film structure creates a clever distancing effect, making space for criticism of the cross-cultural politics of the director in the film, as well as, more broadly, an auto-critique of cinema and filmmaking. The variety of media used for the film’s shoot – both digital (Go-Pro, SD/HD cameras) as well as analogue (8mm and 16mm film) – offer something of a survey of the representational techniques available to filmmakers today. Directors Peranson and Martin play the same sequences multiple times from different cameras trained on the action from various vantage points, including a memorable scene in which the director in the film is sacrificed on a public monument. This latter sequence brings the visual contrast between celluloid and digital images into full relief. As one perspicacious reviewer pointed out, the “expressiveness of artifice” of the 16mm footage is placed in contradistinction to the quotidian, prosaic nature of the digital footage.5 I point out this distinction not to slight digital technology or to create an overly reductive “celluloid is just better” argument, but rather to recognise how we as spectators relate in different ways to the celluloid versus the digital image. Put simply, the pervasiveness of the digital image and our proximity to it in daily life – even as creators of our own images – means that its status as artifice is far less pronounced in comparison to the celluloid image, part of the representational regime we associate with 100+ years of cinema.

Aside from opening up this reflection on cinema technology, Peranson and Martin’s use of celluloid is often brilliant in and of itself, containing fleeting moments of beauty that are genuinely only achievable using the analogue format. Particularly in the film’s closing ten minutes, when the story is abandoned in favour of a reflection on the making of the film, the directors execute an assortment of techniques associated with the avant-garde and structural film traditions6: over-exposure, looping of shots, and insertions of blank black or white frames. Here, the very materiality of the format is exhibited in a poetic and quite profound manner, completely justifying the directors’ choice to use it. Far from being purely an exercise in nostalgia or a fashionable technological anachronism, it displays a mastery of a format with its own aesthetic possibilities that simply can not be replaced. La última película is a superb testament to this fact.