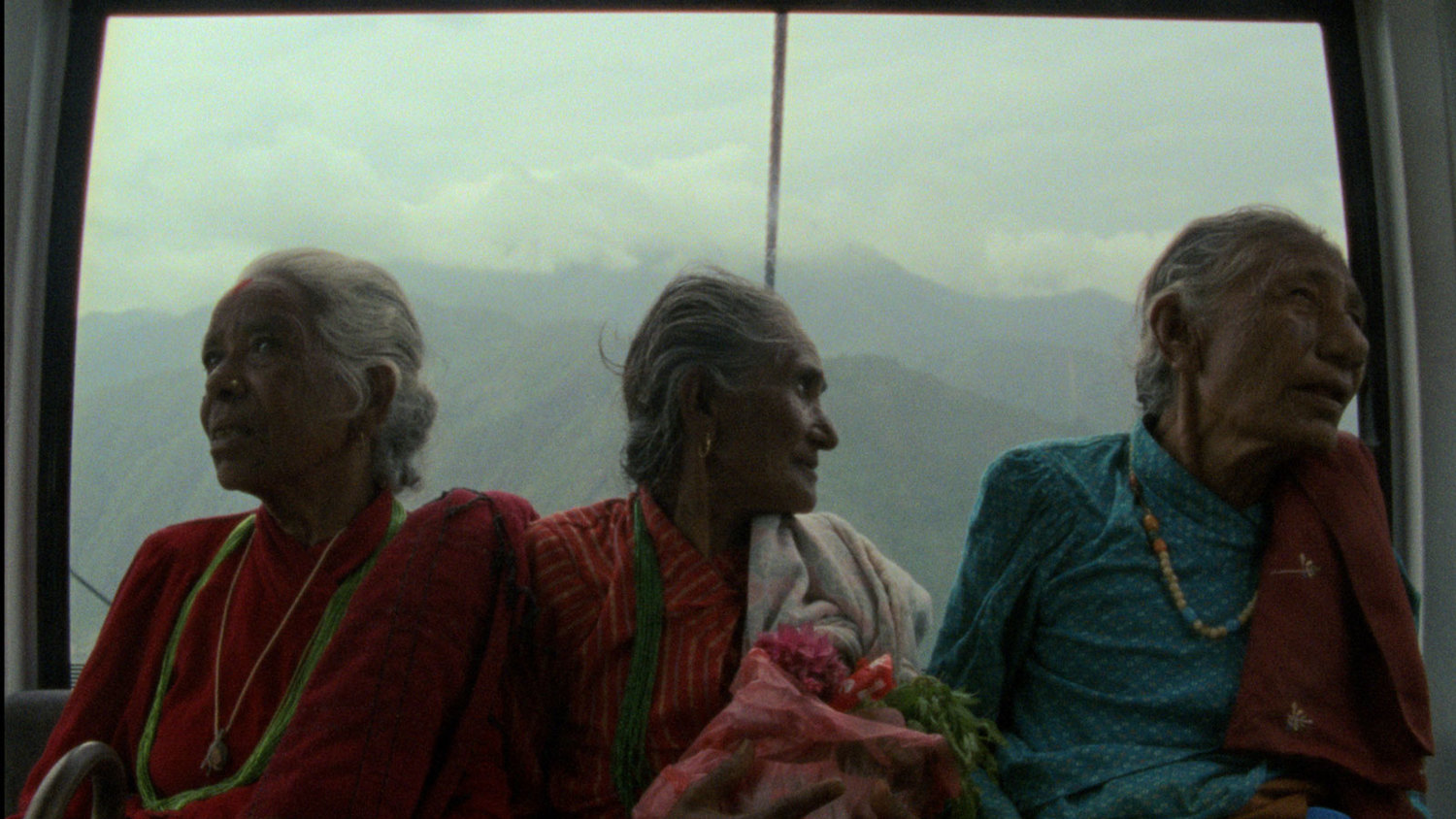 Manakamana consists of eleven static long shots (each roughly eleven minutes in length) that show occupants of a cable car being ferried to and from a Hindu temple in Nepal consecrated to the wish-fulfilling goddess after which the film takes its name. In the first half of the film, we see the cable car’s trips up the mountain to the temple, and in the second half the passengers return from the temple back down the mountain. Through the rear window of the cable car – whose frame is slightly smaller than that of the fixed shots – the rugged mountainous landscape is visible, though obscured to varying degrees by the passengers. Each shot begins and ends in total darkness as the cable car is clipped onto the line at either end of its journey. The soundtrack is composed only of direct sound.

This dry, formalist description may sound daunting for the prospective viewer of Manakamana; it is, after all, all that really takes place for the entirety of the film’s almost two-hour runtime. But this approach, far from representing some kind of impenetrable formalist experimentalism, constitutes the very strength of the film. Its success arises from the ethical and philosophical questions about ethnography, filmmaking and the relationship between the two that is engendered in this systematic formal approach.

Manakamana was funded by and directed by two filmmakers – Stephanie Spray and Pacho Velez – working under the auspices of Harvard’s Sensory Ethnographic Lab (SEL), a part creative, part scientific initiative of the university that brings together artistic works in a diverse array of media. They describe these works as explorations of “the aesthetics and ontology of the natural and unnatural world,” using the specificity of their media and its unique aesthetic possibilities as the key to exploring the relationship between peoples and place. As such, they distance themselves from “the traditions of art that are not deeply infused with the real,” interestingly identifying within this tradition the documentary film “derived from broadcast journalism.” 1 What I understand by this distinction is that, in the case of film, the very basic function of the recording apparatus – to register sound and image – and the sensory experience that this produces are the basis for a survey of our surroundings. Rather than depending on discursive propositions extrapolated from this material, it is the material itself that is the grist for a kind of “ethnographic” inquest.

The film thus enters into the everlasting debates on representation in ethnographic film that have existed since the documentation of (mostly non-western) cultures and places became a possibility of the cinematic medium.2 Spray and Velez respond to this fundamental question – how does one best represent another place or people? – through the rigorous system that they set up for the film’s execution. While this is cleverly made ambiguous in the film, all of the passengers are aware of the camera that is inside the cable car with them. 3 In fact, the directors went through a careful casting process in choosing the passengers, mostly selecting people that they knew or had worked with in their previous films. This gives the film an obvious performative element, recalling, as one reviewer has noted, the Andy Warhol screen tests. 4 In this way, the directors are able to address the prickly filmmaker/subject divide of ethnographic film by diverting our attention elsewhere: this is a document of eleven performances as much as it is of a particular time and place. The best moment of the film for me comes about two thirds of the way in, when two street buskers returning from the temple begin tuning up and playing their instruments. Not only is the music beautiful, but the element of performance inherent in all of the film’s segments is perfectly encapsulated.

The use of the long take not only links these mini performances in some way to the theatre – no cuts, a unity of time and space – but also creates a sensory experience specific to the medium of film in line with the philosophy of the SEL. Through the complete asceticism of film form on display, Spray and Velez have fundamentally engaged with the ethnographic theorist and filmmaker Robert Gardner’s observation that there must be a “profound affinity” between the film medium and the understanding of one’s subject. 5 In an interesting nod to the structural film tradition,6 the shape of the film imitates the journey of the cable car’s passengers; the unspooling of a length of a magazine of 16mm film occurs as the cable car passes from one end of its journey to another.7

Manakamana’s glacial pace and repetitive structure mean that it won’t be to everyone’s taste, and for others it may be that the film is more enjoyable to think about than it is to experience. It is without a doubt one of the most fascinating films that will screen this year at the Melbourne International Film Festival.