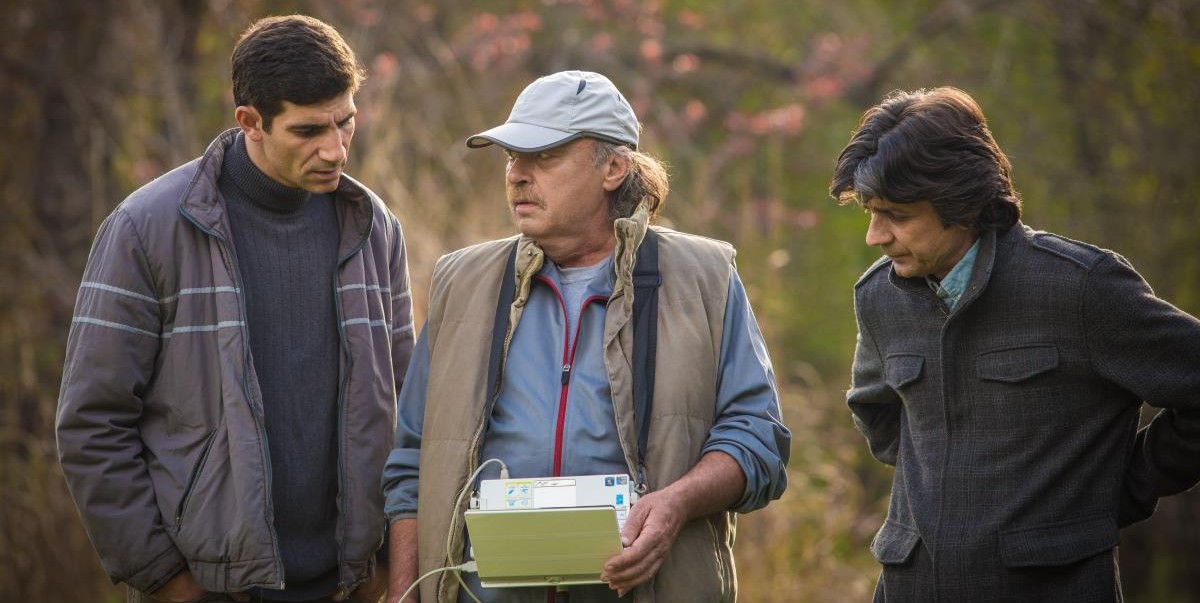 More than anything, audiences will be struck by the simplicity of Corneliu Porumboiu’s newest feature, The Treasure, a film that recalls the clarity of the parable or children’s story in its unadorned yet subtly suggestive narrative. A man is approached by his neighbour to lend him some money for a metal detector, the neighbour insisting that he needs it to find “treasure” buried on a plot of land that belongs to his family. After agreeing to split the findings between them, the two set out to the site to see what they can dig up with the help of a somewhat shady metal detector operator. While going any further with this plot synopsis may put this review into spoiler territory, it would suffice to say that the denouement is in keeping with the unfussy first two-thirds of the film. To Porumboiu’s credit, he has fashioned a fine film that draws its strength and humour from the significant restraint he displays in keeping the story simple, subverting our habitual engagement with more conflict-driven narrative forms.

In an interview given at this year’s Cannes film festival, where The Treasure premiered in the impressive Un Certain Regard section,1 director Corneliu Porumboiu spoke about the film’s origins not as a work of fiction, but rather as a documentary. The director was told by a friend about a particular plot of land that was charged with Romanian history; not far from the site of the Proclamation of Izlaz in 1848, the site was also said to contain buried contents from its past as an industrial site, a school, and two kinds of bars that were built during the communist era. Much like his characters in The Treasure, Porumboiu set out to the site with a metal detector in hand and a small crew to shoot the excavation. According to the director, after looking back on his materials, he was unhappy with the results; he returned to the site with the intention of fictionalising a dig on this peculiar piece of land.

The Treasure maintains the rigorous procedural structure of the expository documentary but exploits it to humorous ends, emphasising and even exaggerating its step-by-step procedural nature. This comes through in large swathes of expository dialogue but also in the level of detail the director puts into the story. From the minutiae of Romanian law with regards to finding historical artifacts of interest to the state, to the cost of metal detector rentals (800 euros if you want to keep it strictly legal, 300 if you can find someone to do it under the table), to the  properties and functional benefits of different types of metal detectors, Porumboiu doesn’t hold back. From one perspective, this is pointless narrative baggage, something that another director would have cut in the interest of propelling his story forward. But it is precisely this almost infuriating level of detail that makes the film so funny, making it not so much a procedural that swiftly progresses step-by-step, rather one that moves at a crawl.

Much as he undercuts the smooth flow of the procedural narrative, Porumboiu also nips potential sources of conflict in the bud, giving us the possibility of tension before taking it away. When it seems as though some antagonising force will thwart our protagonists’ efforts — as in a scene where the police briefly detain the two leads after their dig — Porumboiu quickly rights the ship, with equilibrium re-established before it ever seemed like something would really go wrong.

These subversions of classical narrative form mean that it’s hard to pin down exactly what Porumboiu is suggesting with this exceedingly simple story. The connections to Romanian history are there to be made for the viewer, of course — the characters are literally digging up the past — but at the same time The Treasure never feels like an all-too-obvious political allegory. To his credit, Porumboiu doesn’t force any of these connections upon the viewer, but rather almost floats them dreamily by us. It’s a strange experience, but at the end of the film one has the impression of having seen something quite unique from a director that has forged a singular path in the current batch of Romanian directors.