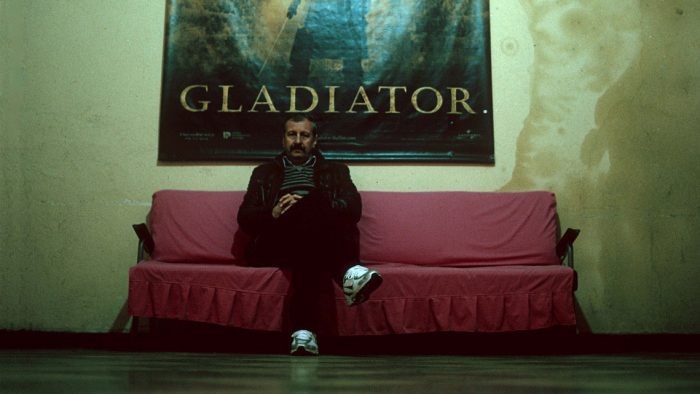 Flooded from behind by the light of a projector, Victor Purice etches out a solitary figure amongst the darkness as he sits on a stool. It’s an indication, just minutes into director Alexandru Belc’s documentary, of this man’s single-minded vision: a vision of a hopeful cinematic future. In Romania, less than 30 of the country’s once 300-strong, state-owned cinemas remain, following in the wake of the transition back to a capitalist market economy and laws that saw publicly-owned cinemas sold off to private investors. It proves a daunting aspiration to save Purice’s Cinema Dacia with almost non-existent funding blighting its future.

As singular as his vision might be, Purice (cinema manager, former projectionist and employee since the 1970s) proves resourceful. Cups of tea and blankets are offered to cinema patrons in mid-winter, to stave off the chill as a substitute for heating. Purice half-jests that they should burn two seats at each screening to keep everyone warm. The joke cuts right to the heart of the documentary; Belc refuses for his documentary to verge into overly saccharine or idealistic territory. Purice is well aware of the financial realities of keeping a single-screen, dilapidated cinema alive – even in Piatra Neamţ, a city with 85,000 residents. Where there might be a risk of portraying his protagonist as a Don Quixote-like figure, documentarian Belc manages to balance that depiction. Brief wistful moments are inserted here and there: in the absence of customers, Purice waltzing with his two loyal staff, Lorena and Cornelia, in the empty foyer of their cinema. What results is optimism in the face of extreme hardship.

What fuels his inexorable optimism? The answer is simple enough: a passion for cinema. As much as the documentary is an ode to cinema, it’s an ode to Purice’s strength of character, his determination and his ingenuity. The camera makes a point of conveying this passion to us in snapshots here and there of Purice’s hands at work. In one instance, we see him meticulously paint out in vibrant blue brushstrokes the new sign for the cinema. It proudly proclaims, ‘Cinema DACIA’. In another moment, cinematographer Tudor Panduru’s handheld camera captures its subject handling old film stock with the practised hands of a projectionist. In each case, the depiction of physical acts enacted by Purice’s hands lend a certain poignancy and gravity to his passion for the medium. It is an intimacy only accessed by the tactility of what we are shown on screen. Nevertheless, the film’s insight delves deeper than that. Panduru’s camera follows Purice dutifully, capturing every moment and bottling it up like a message for help thrown into the sea. Purice and his two employees appear to be the only ones fighting the good fight for the cinema. Calls to the cinema’s RomâniaFilm management go unanswered, and an eventual meeting with one of the film institute’s representatives proves fruitless. In that way, the documentary becomes as much as about Purice’s inner strength as it does about the compelling ability of cinema as a medium to inspire people.

Cinema, mon amour carefully contrasts its subject’s nostalgia with his varied plans for the future. At times, we become caught between the push and pull of these two modes of thinking. In one shot, Purice sits on the stage of his only auditorium, followed immediately by a point-of-view shot that faces his audience – handfuls of kids, gathered to watch Disney’s smash-hit Frozen. It’s also the busiest we ever see the cinema. It appears to be a perfect encapsulation of his predicament: on the one hand, he ingeniously programmes the most popular kid’s movie in recent memory (often a safe bet for any cinema box office-wise). But on the other, the documentary’s audience has seen enough of the inside of his cinemas to know a crowd that large coming to see a film is atypical. Holding a microphone, he proclaims how happy he is to see so many children not just at his cinema, but at the movies altogether. Ubiquitous is the feeling that whatever happens to his cinema has a greater resonance with the future of cinemas across the country.

Gradually, the chinks in Purice’s armour become apparent. Despite a generous offer from another cinema in Germany, Purice cannot afford to transport new seats to his cinema for a much-needed renovation. Lack of funding finally seems a real threat, rather than a nuisance. The documentary ends on an uncertain note, its audience bereft of closure. Although it is not the conclusion we want, it is the realist’s conclusion we anticipate.